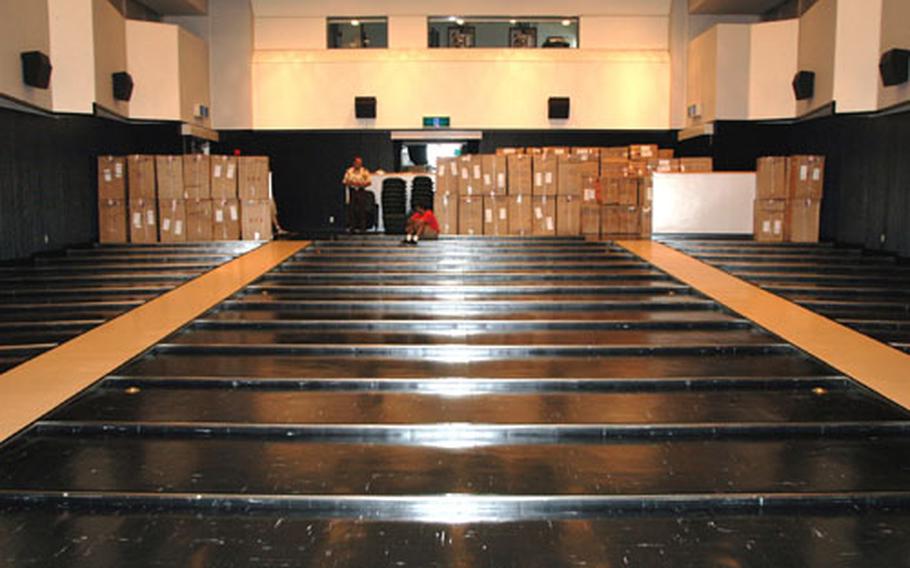 SASEBO NAVAL BASE, Japan &#8212; The Showboat Theater on the main base facility here recently completed the first phase of a $425,000 renovation and was to begin showing movies again Saturday.

The theater now is offering wider seats with cup holders, a new brand of popcorn, a new indoor paint job and a new way to pay coupled with head-of-the-line privileges, said Morale, Welfare and Recreation community activities manager Dave Wagner from inside the theater Wednesday.

Wagner said patrons taking part in an MWR customer appraisal system about a year ago identified five aspects of attending movies at the Showboat as bothersome:

&#8226; The chairs were filthy, too small and had no cup holders.&#8226; The inside of the theater was dull and unattractive.&#8226; The popcorn was terrible.&#8226; There was no way to purchase advance tickets.&#8226; The lobby was too small to accommodate both ticket buyers and snack purchasers.

&#8220;We painted the inside very dark so when the lights are off and a movie is being shown, it will be that much better to watch at the Showboat,&#8221; said theater manager John Stemen.

The thick-cushioned forest-green chairs, about four inches wider than the old red seats, have cup holders on each armrest, which should make juggling drinks, candy boxes and popcorn easier for customers.

&#8220;And the cup holders will make the theater that much easier for us to clean up after a day of movies and people spilling drinks when they had to sit them on the floor,&#8221; Stemen said.

Wednesday, 337 new theater seats were boxed and piled high on the stage and behind the seating area. Contractors installed the seats row-by-row starting that night so the theater could open Saturday afternoon.

MWR promises the popcorn will be easier on the palate.

He said Cine-Pass holders can go directly to the front of the line, where their Cine-Pass cards will be stamped and they can be admitted.

The passes are on sale now at the Showboat Theater and other MWR locations.

Later this year, the renovation&#8217;s final phase occurs as the lobby and food-service area is extended from the current entrance to the street &#8212; easily making the lobby another 15 yards deeper.