Kyle Terry plays the role of the stereotypical overaggressive young male trying to pick up a woman, played by Courtney Abbott, during a presentation of “Sex Signals” Friday at Misawa Air Base, Japan. (T.D. Flack / S&S)

Kyle Terry plays the role of the stereotypical overaggressive young male trying to pick up a woman, played by Courtney Abbott, during a presentation of “Sex Signals” Friday at Misawa Air Base, Japan. (T.D. Flack / S&S) 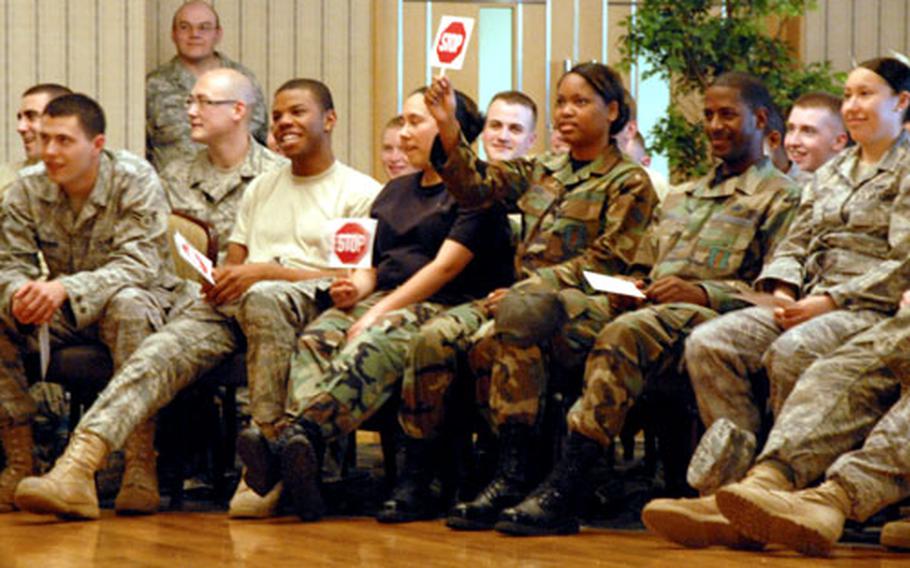 An airman holds up a “STOP” sign during the presentation of “Sex Signals.” (T.D. Flack / S&S) Airmen at Misawa Air Base, Japan, laugh during a presentation of “Sex Signals” on Friday. (T.D. Flack / S&S)

MISAWA AIR BASE, Japan &#8212; Misawa-based troops were treated to a frank, funny and no-holds-barred discussion about sex Friday.

The goal, according to Catharsis, is to use "improvisational comedy, education, and audience interaction to provide a provocative look at dating, sex, and the core issue of consent."

The program was created for college audiences in 2000, but the U.S. military has since contracted to bring it to bases around the world to combat sexual assaults within the ranks.

Courtney Abbott and Kyle Terry kept the audience engaged in the first of three sessions Friday morning. Both actors have been with the show about five years, and they say they don&#8217;t see huge differences between collegiate and military audiences.

If anything, they stressed that they have seen one worrisome similarity: a slowly worsening blas&#233; attitude toward the entire issue of sex from both audiences. The younger people tend to think of sex as an automatic, Abbott said.

There is one benefit with the military audiences, she said. Abbot says she&#8217;s noticed the troops have "pledged their life" to a calling, that they have an institutional set of values to which they&#8217;re supposed to adhere.

Terry said a lot of work has gone into tailoring the military presentations, mainly with the way the troops "use the military language" so the actors don&#8217;t come across as outsiders who don&#8217;t understand the base culture.

As they worked their way through various scenes Friday, they took audience input, while seamlessly weaving in Air Force terms like "first shirt" and "wingman."

They also kept the audience laughing as they went through various stereotypes and the often awkward process of dating. The language was often coarse, sometimes profane, to keep it as realistic as possible.

"The words we use to talk about sex are awful," Abbott told the audience, reeling off terms like pound, nail and hammer. "Are you having sex at a Home Depot?"

"You can do it, we can help," cracked Terry.

But the show became a bit more serious when Abbott told Terry to start a scene by stating, "I really didn&#8217;t rape that girl."

In the scene, Terry is an airman who&#8217;s accused of raping a fellow servicemember on Misawa. He&#8217;s given a chance to present his side of the story, and took questions from the audience. During the questioning, he admitted that the woman whispered once to "stop" while they were having sex.

The scenario sparked a lot of discussion with the audience, who asked questions about the amount of alcohol that was supposedly consumed that night. One airman brought up the issue of a woman possibly claiming rape because she felt guilty about drunkenly having sex.

Terry told Stars and Stripes that those detail-oriented questions are commonplace during the show, because people want to "distance themselves" from the reality by trying to "find these loopholes."

"Why not make the choice not to drink until blacking out" and putting yourself in that situation, Terry asked the audience.

Note: Sergeants major will disseminate tickets to their commands on Okinawa. Parent/teen shows are on a first-come, first-served basis. Children younger than 13 are not allowed to attend; teens 13 to 17 must be with a parent or guardian. Seats limited to 350 per show.

June 29: Andersen Air Force Base (Contact base personnel for details)