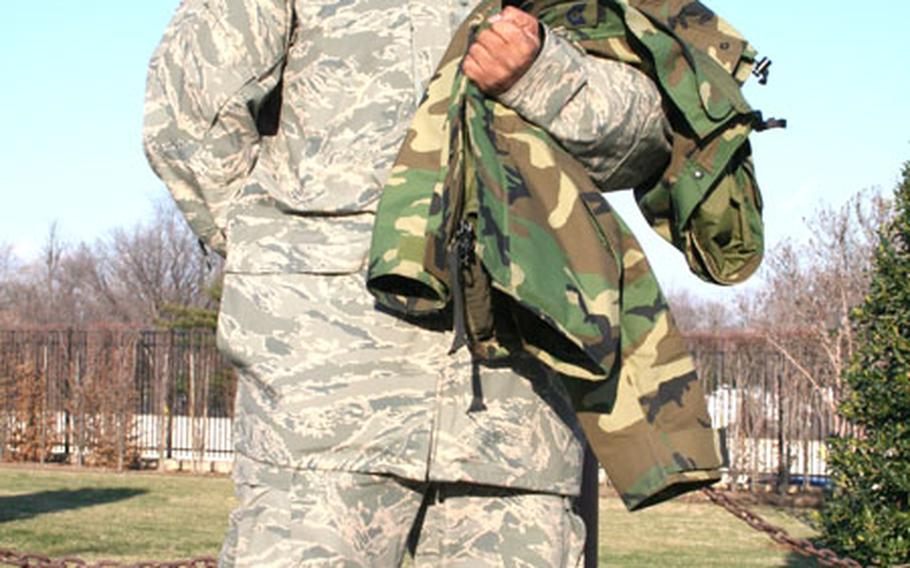 ARLINGTON, Va. &#8212; The jacket for the Air Force&#8217;s new battle dress uniform is in such short supply that commanders can let personnel don the woodland-patterned Gore-Tex coat instead, according to a temporary policy that went into effect Monday.

Official Air Force uniform rules say anyone wearing the Airman Battle Dress Uniform &#8212; the ABU as it&#8217;s known to the force &#8212; when it gets cold must also wear the new matching All Purpose Environmental Clothing System (APECS) jacket.

But problems with production mean that the APECS jacket is not being delivered as fast as officials would like, according to Lt. Gen. Roger Brady, the Air Force&#8217;s former deputy chief of staff for manpower and personnel.

Brady&#8217;s successor, Lt. Gen. Dick Newton, announced on Monday that he is giving field commanders temporary authority to let their ABU-wearing airmen put their old clashing-but-warm Gore-Tex coats on top, &#8220;if the new APECS jacket &#8230; and other approved cold weather options are unavailable or unsuitable for duty.&#8221;

First priority for distribution is going to airmen who are deployed or about to deploy to Iraq, Afghanistan and Kuwait, officials said. The Air Force has figured out how many deployed airmen still need an APEC, and will ship them jackets by the end of this month, according to spokesman Capt. Tom Wenz.

Air Force officials said the APECS jackets will become more widely available starting in February. The ABU won&#8217;t be mandatory wear for all airmen until November 2011.

Air Force officials are aware that the old jacket and new uniform combination creates a less than ideal visual, Chief Master Sgt. of the Air Force Rodney McKinley said in a news release explaining the temporary deviation from policy.