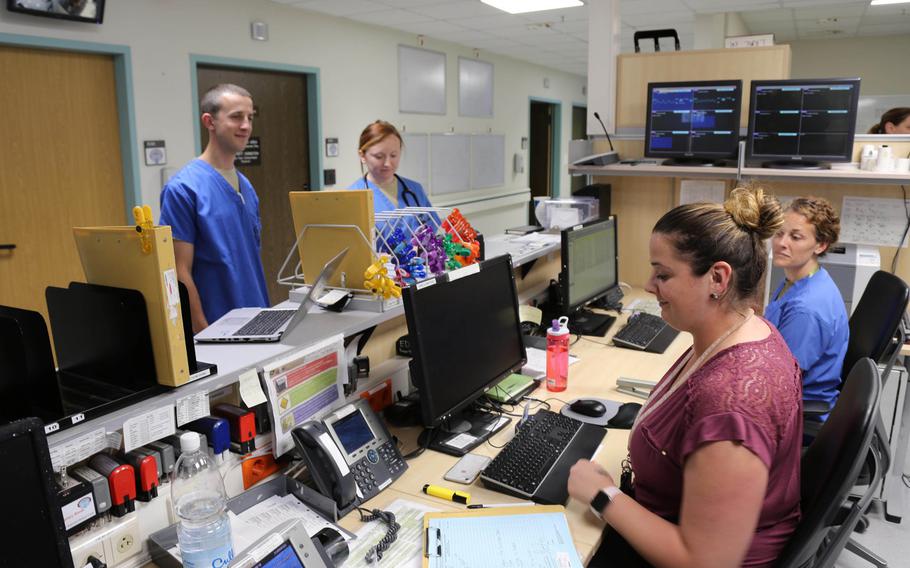 Buy Photo
A mix of civilian and military workers staff the intake desk at the emergency room of Landstuhl Regional Medical Center. A recent GAO study outlined the difficulties the military has with shortages of civilian medical workers and recommended steps to address the issue. (Will Morris/Stars and Stripes)

Buy Photo
A mix of civilian and military workers staff the intake desk at the emergency room of Landstuhl Regional Medical Center. A recent GAO study outlined the difficulties the military has with shortages of civilian medical workers and recommended steps to address the issue. (Will Morris/Stars and Stripes) Doctors perform a surgery at Landstuhl Regional Medical Center. A shortage of civilian doctors in military hospitals is causing treatment problems, according to a Government Accountability Office report. (U.S. Army)

Staff shortages at military hospitals have forced some to discontinue services, refer patients to private providers and send others to Veterans Affairs hospitals for treatment, a government watchdog has found.

In some cases, the lack of civilian personnel could threaten the accreditation of hospital programs.

One unnamed hospital was unable to meet “minimum staffing standards for labor and delivery” and officials had to refer patients to Tricare, the military’s insurance network for private care, a Government Accountability Office review of the military health care system found.

Other shortages put laboratory services at risk at the same hospital and the accreditation of a hematology-oncology program at risk at another unnamed hospital, said the GAO report, released Tuesday.

The Senate had asked for a review of the military medical workforce mix in a report with last year’s defense budget, citing a Pentagon estimate that an inefficient medical workforce mix would cost the department $3 billion over five years. It also cited a DOD-sponsored study that found taxpayer cost for military medical personnel “far exceeds the cost of civilian healthcare providers with comparable skills.”

As a result of those shortages, uniformed personnel are increasingly picking up the slack.

“Senior officials from one Air Force (facility) noted that morale of its military staff is negatively affected by extra hours and additional responsibilities placed on them to ensure continued operations,” the study found.

Active duty and reserve military personnel form the bulk of the workforce at hospitals and clinics, but government employees and contractors account for an average of 22 percent of the staff.

The GAO report called on DOD to develop a total workforce plan for the Defense Health Agency to ensure an appropriate mix of uniformed civilian workers. It also said the Pentagon needs to determine the full cost of continuing to use active duty and reserve component medical personnel, and it recommended that DOD look at the ways federal civilians and contractors are being used to provide operational medical care — a role usually reserved for uniformed personnel.

In a draft edition of the report, the DOD concurred with the recommendations.