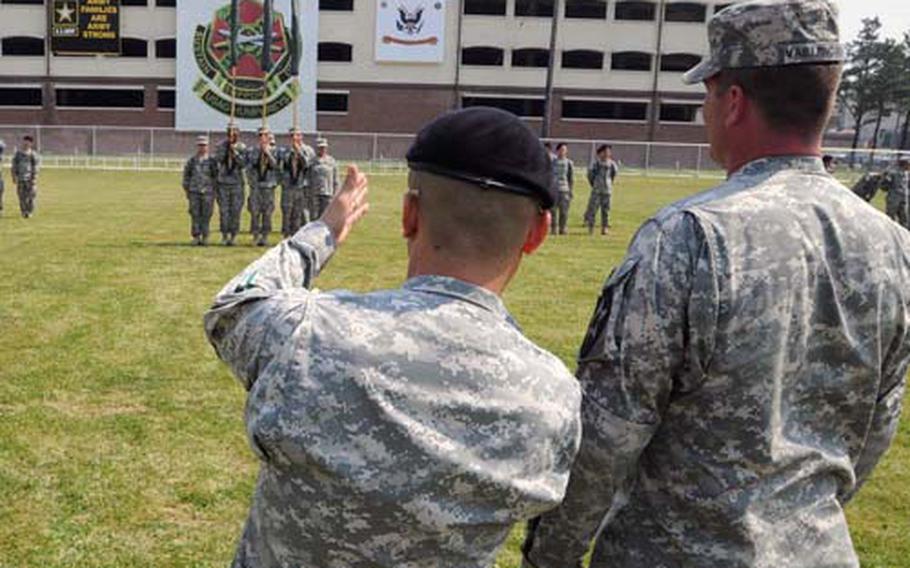 CAMP HUMPHREYS, South Korea &#8212; The parade ground here is reseeded and the grass freshly cut. The troops will be aligned on the field Wednesday morning, the color guard will be in place, each unit standing on spots carefully marked days before the change-of-command ceremony.

The U.S. Army Garrison-Humphreys will have a new commander. At a ceremony set for 10 a.m. Wednesday at Freedom Field, Col. John E. Dumoulin Jr. is to relinquish command to Col. Joe Moore. Dumoulin moves to a new assignment as executive officer for the U.S. Forces Korea commander in Seoul.

For a ceremony scheduled to last half an hour, a small army of planners has worked for weeks to see that things go off without a hitch.

Change-of-command ceremonies are important for the troops, families and others who make up a garrison because getting a new commander is not unlike getting a new mayor.

But it&#8217;s also a milestone for the departing commander and spouse: an important tour of duty is wrapped up; a new stage of life and career is about to begin.

That preparation saw dozens of garrison officials holding repeated planning sessions that covered a multitude of tasks. And scores of soldiers took part in rehearsals. Markers had to be put down in precisely the right places so speakers, troops in formation and others taking part would know exactly where to stand.

There were the 400 invitations that had to be written, printed and mailed out or hand-delivered; a program that had to be designed, with 250 copies printed.

Planners had to decide what areas should be set aside for parking. Military police officers had to be positioned at key intersections to guide motorists to the field.

Planning and teamwork was crucial, and nothing could be left to chance, said Staff Sgt. Linette Keller, lead coordinator for the ceremony.