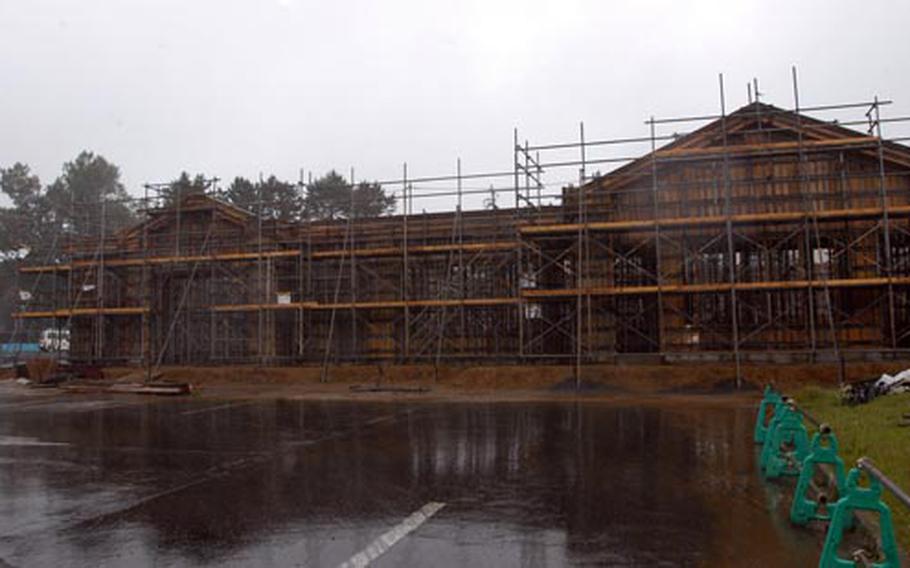 The new 13,670-square foot Army and Air Force Exchange Service shoppette, laundry and dry cleaners and Popeye&#39;s restaurant facility is about 30 percent complete. When it opens - currently slated for this December or January - the facility will hold the largest shoppette in mainland Japan, according to AAFES officials. (Jennifer H. Svan / S&S)

MISAWA AIR BASE, Japan &#8212; The building taking shape in the construction zone between the post office and the Burger King here will be the largest Army and Air Force Exchange Service shoppette in mainland Japan, according to AAFES officials.

The 13,670-square-foot complex will include a shoppette twice the size as the current one, a Popeye&#8217;s restaurant, and a laundry and dry cleaning shop. The bigger shoppette will have 20 reach-in cooler doors, more aisle space and a merchandise selection, and a larger snack area selling hot dogs, nachos, cold drinks, and a variety of coffees, among other items, Iosefo said.

"We&#8217;re really excited about it," she said. "Customers are starting to see the outline of the building."

Construction began in February. In planning since 1995, the new facility is designed to provide customers with "one-stop shopping" and more convenience. It&#8217;s within walking distance of the dormitories, Iosefo said.

"The existing buildings were old," she said.

The current shoppette was built in 1949 and was previously a base library and later a club. It was converted into a shoppette in 2003.

That building, along with the ones housing Popeyes (since 1992) and dry cleaning and laundry (since 1986), will be demolished at a later date, Iosefo said.

AAFES is also investing about $250,000 in the base theater this summer to renovate the concessions stand, Iosefo said. Equipment is being upgraded and pizza will be added to the menu. The improvements come as the Air Force sinks $2.3 million into the 50-year-old building to better accommodate military training. The Richard I. Bong Training Facility, which AAFES also uses as a movie theater, will have more floor space, new seats, air conditioning and renovated bathrooms.

Iosefo said AAFES won&#8217;t be showing movies for about five weeks this fall to complete the snack stand "and also so the base can finish its project." The theater closure will be announced in advance, she noted. The project is expected to be finished in November, according to Air Force officials.