Shoppers swarm exchanges on the day after Christmas 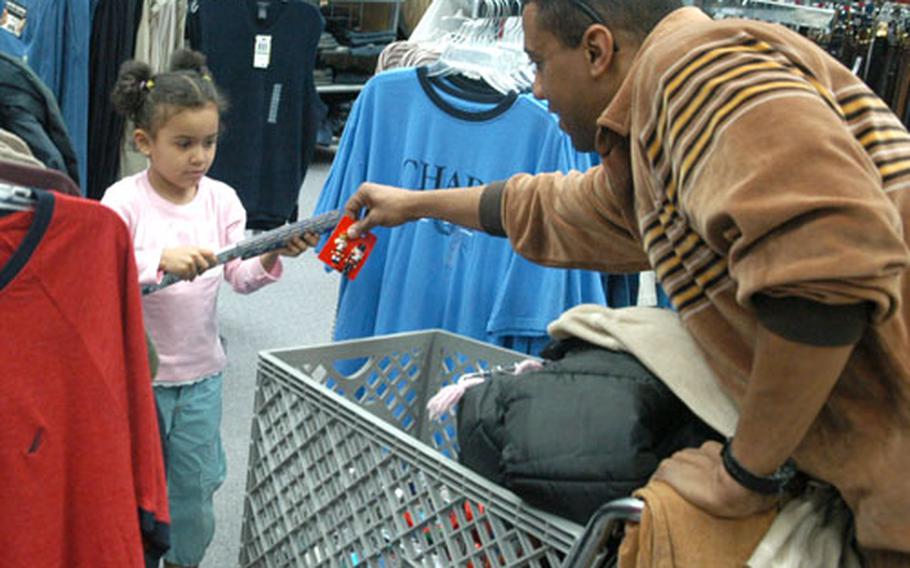 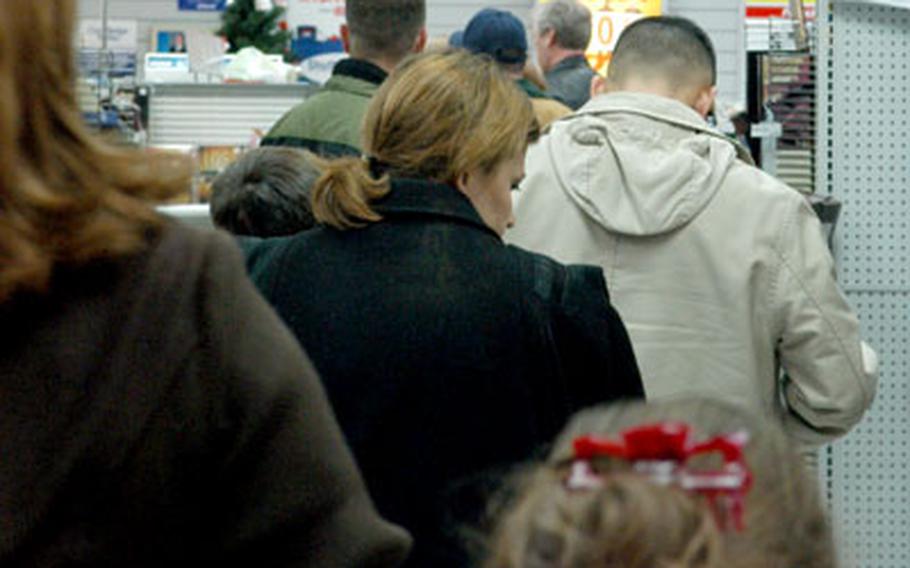 The lines were long Tuesday afternoon at the post exchange in Wiesbaden, Germany, as shoppers took advantage of post-Christmas deals. (Geoff Ziezulewicz / S&S) 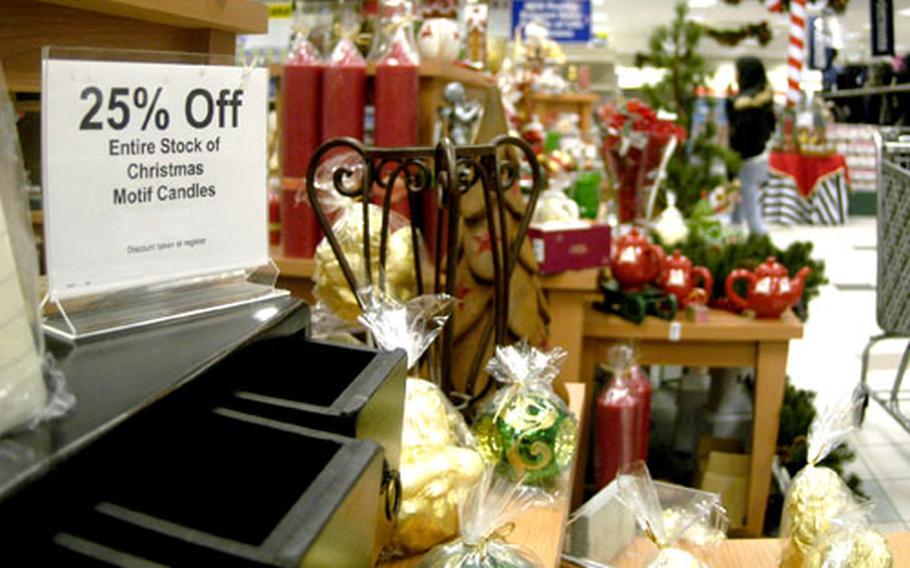 Despite what is being called a disappointing holiday sales season for retailers in the States, the Army and Air Force Exchange Service didn&#8217;t do too badly this year, bringing in $1 million more in retail merchandise sales in Europe this year compared to 2005.

AAFES sales might go up even more before 2007 arrives. On Tuesday, some American shoppers in Europe mimicked their stateside counterparts, hitting up AAFES exchanges en masse to check out post-Christmas deals.

Coming out of the post exchange in Wiesbaden, Germany, Sarah Parkhurst said the AAFES sales Tuesday didn&#8217;t really compare to sales back home. &#8220;Almost everything we bought was full price anyway,&#8221; she said.

As long lines formed behind him, store manager Christopher Costella said that the amount of business on Tuesday was &#8220;almost the same&#8221; as the business on the weekend before Christmas.

Gift sets containing perfume and other items were moving the fastest on Tuesday, he said. But crowds and lines weren&#8217;t a Dec. 26 staple across all of Europe.

At the Navy Exchange in Naples, Italy, Tamara Schmidt had prepared herself for an excruciatingly long wait in the customer service return line, only to be rewarded with the little time it took to return some oversized clothing for her husband and a Tinkerbell motion lamp that didn&#8217;t work.

&#8220;I was really surprised. With as many cars as there are in the parking lot, I thought there would be a lot of people in line. What a relief,&#8221; Schmidt said after taking care of her return business in less than 10 minutes.

She and other shoppers credited the light foot traffic in the returns line to a few things, from shoppers opting to buy gift cards to shopping via Internet and having packages mailed directly to families, or just plain listening to the clues their loved ones dropped for holiday gifts.

But the Naples exchange was steadily busy all day, with customers making purchases instead of returning items, said customer service manager Margaret Bollinger.

The NEX planned for weeklong sales on items such as toys, jewelry, furniture and cosmetics, and it was too early to calculate post-holiday revenues, she said on Tuesday. The week after Christmas is becoming an increasingly viable way to shake off sluggish preholiday sales, with deeper discounts and people redeeming their gift cards.

Citing a poll conducted for the National Retail Foundation, The Associated Press reported Tuesday that the week ending Dec. 31 accounted for 15.6 percent of holiday sales in 2005, compared with 10.3 percent in the corresponding period in 2004.

Stores in the States struggled through the first few weeks of December this year as consumers returned to malls and stores at a disappointing pace, the AP reported. Stores did get a late-buying sales surge in the final days of the pre-Christmas season, but it was not enough to meet holiday goals.

&#8220;We have a big attic and lots of space up there, so we&#8217;re stocking up now and taking advantage of the sale prices instead of waiting until later and then paying full price,&#8221; she said.

Stars and Stripes reporter Sandra Jontz contributed to this story.

Many still waiting to get their hands on PlayStation 3

One of the more coveted gift items for kids of all ages this holiday season was the slick new Sony PlayStation 3, a video game console that both the Army and Air Force Exchange Service and stores back home had trouble keeping in stock.

After an initial worldwide supply of 1,600 units were doled out to AAFES stores in early December, a second shipment was pushed through in the middle of the month, said Teresa Gaskins, an AAFES retail program specialist.

However, that new shipment was sparse and didn&#8217;t make it to Europe stores in time for Christmas, she said. Instead, the consoles should arrive later this week. And don&#8217;t expect stacks and stacks of the PS3 to be sitting at AAFES stores.

While she couldn&#8217;t give a concrete number, Gaskins said that even the biggest exchanges in Europe can expect only about 20 or so of the 60- and 20-gigabyte machines in all with the new shipment. Like the console shipment earlier this month, the few PS3 units that hit shelves this week will be distributed via a lottery.