Shoppers in Germany hit the exchange for post-Christmas sales 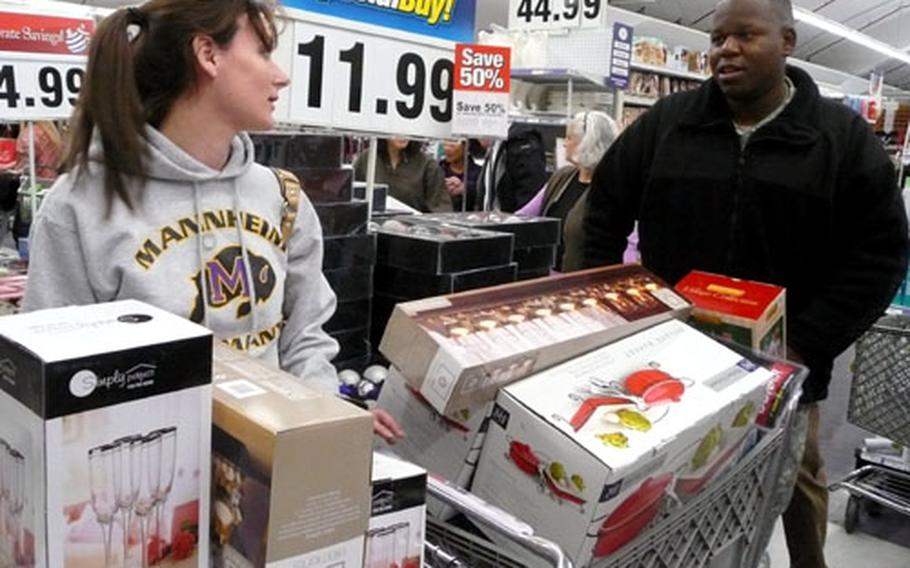 Sgt. Felix Eady, a member of the 44th Signal Battalion, and his wife, Dacia, wait on line at the Army and Air Force Exchange Service main store in Mannheim with two shopping carts full mostly of dishes and glassware. (Matt Millham / S&S)

A somewhat spontaneous Black Friday encore broke out in Mannheim on Friday as post-holiday shoppers flooded the Army and Air Force Exchange Service, inspired by after-Christmas discounts and returning troops looking to treat themselves and loved ones.

There was some business in returns and exchanges, but that paled in comparison to the business going on at the front of the store.

Within a half hour of opening, checkout lines at Mannheim&#8217;s main exchange were more than a dozen shoppers deep, overwhelming a store that seemed not to have expected the rush.

&#8220;I just got back from Iraq last night,&#8221; said Sgt. Felix Eady, a member of 44th Signal Battalion. This was his first shopping trip since returning.

After 15 months in Iraq and barely a full-night&#8217;s sleep, he and his wife, Dacia, were among the first shoppers through the door.

Even with all the items they selected marked down 50 percent, they estimated their haul at about $350.

About 200 other soldiers got back to Mannheim with Eady on Christmas day, and about 150 others got back Tuesday. Dozens streamed into the exchange Friday morning, stocking up on everything from beef jerky to video games.

A bit behind her in line, Claire Hann was helping her mother with three shopping carts full of decorations, knickknacks and various holiday oddities including a small stack of Santa backpacks.

The haul was, she said, even bigger than what they&#8217;d bought before Christmas. It was also more or less unplanned &#8212; they walked into the store, saw the deals and decided to buy.

&#8220;I think it&#8217;s pretty traditional here for people to shop for Christmas ornaments after the Christmas season,&#8221; she said.

It wasn&#8217;t nearly as packed in Heidelberg, where Stephanie Gallop was at the AAFES main exchange on an entirely premeditated post-Christmas shopping spree to prep for next holiday season.

&#8220;I actually expected it to be picked over by the time I got here,&#8221; said Gallop, manager of the Heidelberg Thrift Store. She usually hits up the day-after sales to pick up decorations and toys for the store&#8217;s annual Christmas raffle.

She was surprised there was so much good stuff left, and that the store was relatively empty.