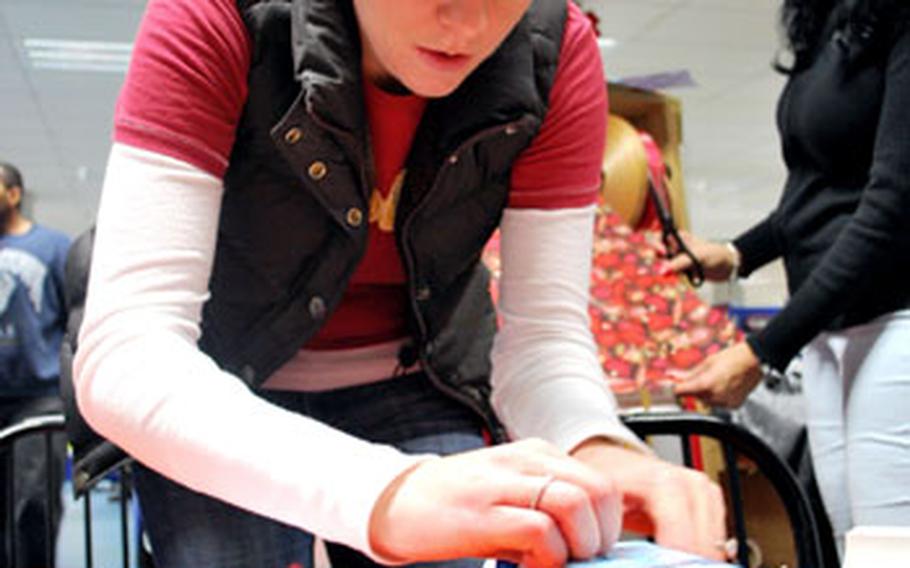 KAISERSLAUTERN, Germany &#8212; With just days left until Santa attempts to pull off yet another improbable worldwide cookie-and-milk run, some Americans in Europe are still scrambling for a few more items on their holiday shopping lists.

With a bit of extra work, many have found what they want; others are either holding out hope for a Christmas miracle or settling for less-than-perfect gifts.

Army and Air Force Exchange Service officials say they have a healthy stock of what they consider the season&#8217;s Top 10 hot items, including Nintendo&#8217;s Wii game console, which is the most popular gift for a third straight year.

Standard holiday paraphernalia such as sweaters, sweatshirts and slippers are also big, along with small appliances, bicycles and board games.

"I didn&#8217;t have any problem finding what I was looking for," said Joanna McCormack, who on Tuesday bought a small stack of DVDs at Vogelweh&#8217;s exchange and had them wrapped on the spot.

For clothes and shoes McCormack headed off base to Christmas markets in Heidelberg and Kaiserslautern. While the exchange had Zune digital music players, it didn&#8217;t have the color she wanted, so she went online.

"The only thing is hoping it gets here on time," McCormack said.

Holiday procrastinators can forget the Internet if they want to drop more than an IOU in the old stocking. Those willing to spend a bit more for must-have doodads still can hit off-base retailers.

"I can go off base and find whatever the [heck] I need," said Sarah Knight, an Air Force spouse who lamented AAFES&#8217; selection of children&#8217;s clothing and the fact it had run out of the Sony Mylo, a miniature computer-like device that is tagged a "best seller" on the exchange&#8217;s online store.

"They actually have it on display, they just have none in stock," she said.

High off-base prices, puny cost-of-living allowances and climbing exchange rates mean more people are shopping on base and competing for must-have gifts, according to Knight and her shopping partner, Angela Merritt.

AAFES has a lot of stuff, they said, but they couldn&#8217;t find just what they were looking for.

"This is just stuff that we grabbed," Merritt said nodding toward the bulging shopping bags of gifts they&#8217;d just bought. With a smile and a roll of her eyes she quipped, "Spirits are down."