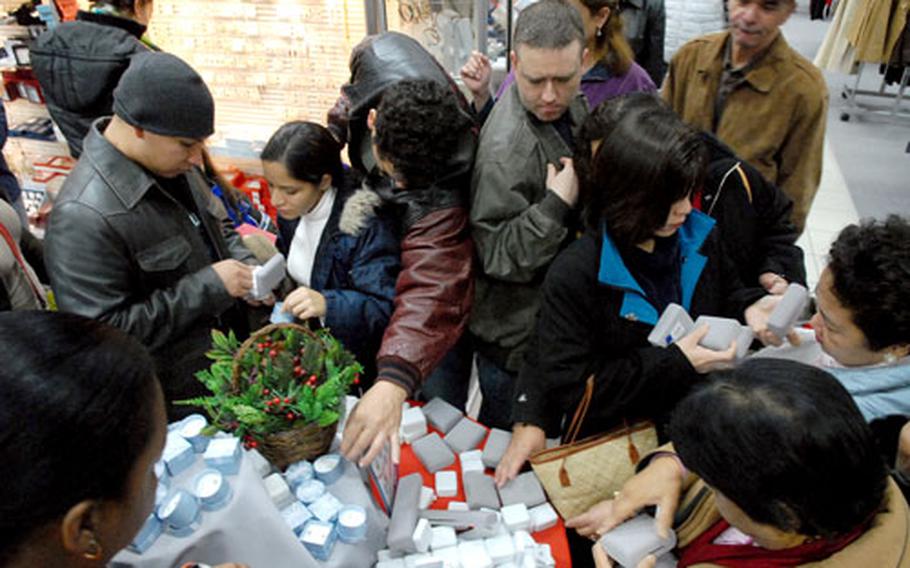 Shoppers surround a table full of jewelry during a manager&#39;s special at the Hainerberg Post Exchange in Wiesbaden, Germany. For 10 minutes, the prices for the items on the table were 50 percent off. (Michael Abrams / S&S)

Shoppers surround a table full of jewelry during a manager&#39;s special at the Hainerberg Post Exchange in Wiesbaden, Germany. For 10 minutes, the prices for the items on the table were 50 percent off. (Michael Abrams / S&S) 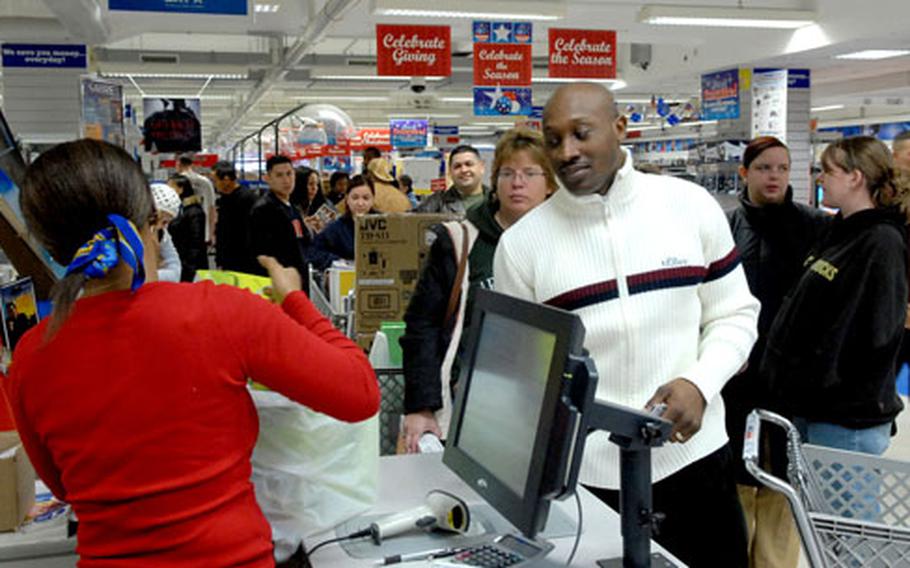 Lines were long for shoppers at the Mainz-Kastel PowerZone on the day after Thanksgiving as Black Friday sales got under way. Lines already were forming for the store opening at 7 a.m., and by midmorning some of the sale items, such as $498 laptops, were sold out. Army and Air Force Exchange Service stores are having sales all weekend. (Michael Abrams / S&S)

NAPLES, Italy &#8212; Petty Officer 3rd Class Lisa Hood had eyed a Coach wallet for about a year, waiting for the right price.

Hood battled the crowds and long register lines to swoop up her $100 treasure, after the 20 percent discount because of day-after-Thanksgiving shopping specials at the Navy Exchange at the support site base in Gricignano.

The Friday after Thanksgiving long has been known as a day in which shoppers usher in the holiday shopping season by looking for bargains from retailers willing to accommodate with expanded hours and generous discounts.

The NEX in Naples, for example, kicked off the holiday shopping season at 8 a.m. with its &#8220;door buster&#8221; specials and included 20 percent discounts on items such as handbags, children&#8217;s clothing, sunglasses and watches, and a 25 percent discount on diamonds.

Yalonda Boyd had a special interest in taking advantage of the sale prices for electronics, particularly a camera and laptop computer. She&#8217;d arrived at the Naples&#8217; NEX at 8:30 Friday morning, knowing she wouldn&#8217;t beat the crowds, but didn&#8217;t think there&#8217;d be so many shoppers.

For some, it wouldn&#8217;t have been a normal holiday season start without tossing a toy or two into the U.S. Marine Corps Reserve&#8217;s Toys for Tots charity drive. &#8220;You should donate. It&#8217;s good karma,&#8221; Maria Caragiulo, 12, called to her mother as they passed Gunnery Sgt. Lino Tobar and Petty Officer 1st Class Adam Matthews standing sentry in front of a huge, decorated collection box.

Last year, the Naples-based Toys for Tots campaign collected 2,000 pieces of new toys that volunteers distributed to 27 orphanages and institutions in and around the Naples area, Tobar said.

While the deadline this year is Dec. 10 to get the donated gifts to the participating Italian charities, Tobar said, volunteers likely will still collect afterward and take any overflow toys to local churches.

Matthews said he was enjoying his four hours Friday of standing at the exchange entrance thanking donors who contributed toys, including trucks, books and even a bicycle.