Shoplifting incidents on the rise at AAFES stores 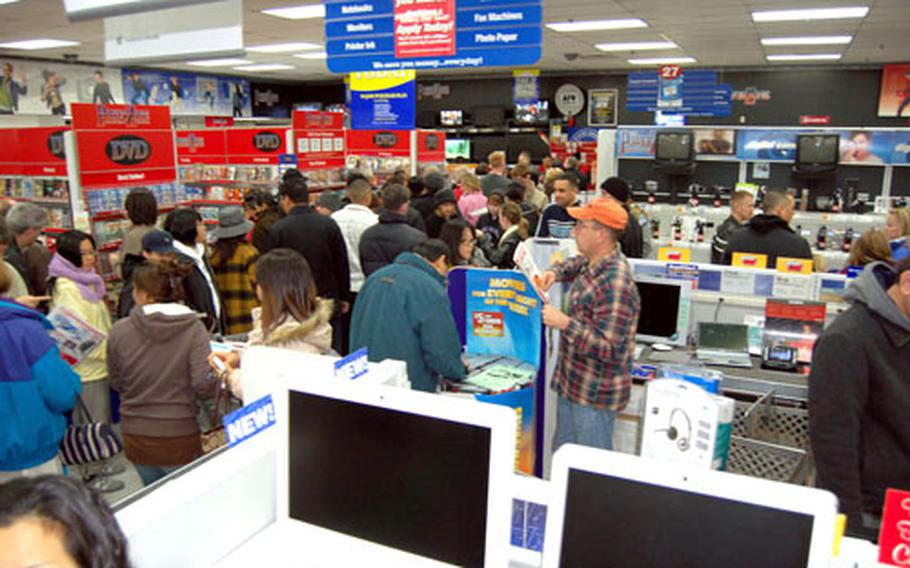 Customers crowd the Yongsan Garrison, South Korea, post exchange the day after Thanksgiving in this Stars and Stripes file photo. AAFES officials have reported that shoplifting is on the rise in their Pacific stores. (Jimmy Norris/ S&S)

SEOUL &#8212; Despite video surveillance, security personnel and television spots warning of the consequences of the crime, shoplifting is on the rise in AAFES stores in the Pacific, officials said.

George Shaffer, a loss prevention manager for the Army and Air Force Exchanges Service, confirmed recently that AAFES stores in South Korea, Okinawa and mainland Japan have seen a 31 percent increase in shoplifting cases this year compared to the same time in 2006. From the start of AAFES fiscal year in February, 311 people have been caught in the region with more than $87,000 in shoplifted merchandise, he said. By this time the previous year, 237 shoplifters had been caught, Shaffer said.

But Shaffer said the problem is probably bigger than those numbers represent. He said retail industry estimates are that only one in 10 shoplifters are caught.

Shaffer said there is no pattern as to who shoplifts: active-duty enlisted and officers, retirees, spouses, children and civilian contractors have been nabbed. Most of those caught at Yongsan Garrison this year have been minor dependents, according to a column in the Dec. 7 edition of the U.S. Army&#8217;s Morning Calm command newspaper.

Garrison commander Col. Dave Hall&#8217;s column also said Yongsan has seen a 30 percent increase in shoplifting over the past year.

Shaffer said items most likely to be stolen are computer games, DVDs, compact discs, memory sticks and clothing. He said paying customers bear the brunt of the costs from shoplifting.

&#8220;Any added expenses associated with shoplifting losses have an impact on operating costs, which are passed on to the customer directly,&#8221; he said.

Shoplifting statisticsThe following are numbers of shoplifters caught and values of merchandise stolen at Army and Air Force Exchanges Service stores in Okinawa, South Korea and Japan, according to AAFES.