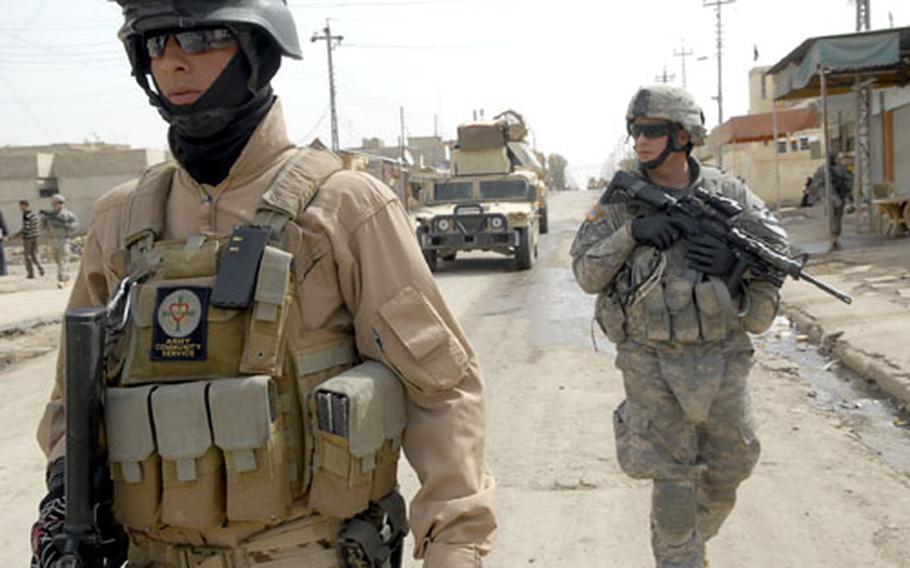 MOSUL, Iraq &#8212; Everything is suspect in this desperate, rubble-strewn city.

Death is packed into freshly laid concrete, piles of trash, speeding cars, even an explosives-laden teapot. It comes from bombs and mortars and snipers&#8217; bullets. Recently, the death dealers have worn Iraqi police and army uniforms, straining the crucial partnership between U.S. soldiers and their Iraqi counterparts.

"It makes you look a little harder at the guys you&#8217;ve been working with," said Chief Warrant Officer 2 Nick Capozzi of the 3rd Heavy Brigade Combat Team, 1st Cavalry Division.

Trust is paramount in today&#8217;s Iraq, where &#8211; under the security pact between the two countries &#8211; every military patrol is now supposed to be Iraqi-led and American-supported. The shooting death Tuesday of an American soldier and his interpreter by two Iraqi police officers threatens to undermine that trust.

The shooting, which also left three soldiers and another interpreter wounded, was the third instance of Iraqi police or soldiers firing on Americans in Mosul since November.

While violence has ebbed across Iraq, insurgents retain a foothold in Mosul, a Sunni stronghold of 2 million people in the far northern province of Ninevah. U.S. and Iraqi forces are jointly conducting Operation Ninevah Resolve, a monthslong, house-to-house effort aimed at stamping out the insurgency in Mosul for good.

American soldiers walk the streets and share sensitive tips with their Iraqi counterparts, not to mention counting on them during firefights.

Daily patrols almost always include a stop by a U.S. captain or lieutenant at an Iraqi army or police commander&#8217;s office to talk strategy over tea.

Kevlar helmets generally come off, as does body armor sometimes, in part to create an atmosphere of trust.

U.S. troops almost always pull security outside the office, but it definitely provides for a softer target and it appears the Iraqi policemen who opened fire Tuesday took advantage of such a moment during a luncheon.

Working side by side with Iraqi forces is the only way to get Iraqis to the point where they can secure their own country, said Capt. Jay Bradley, who spent his first deployment training Iraqi soldiers.

"You have to integrate with the army to get things done and it is significantly more risky," said Bradley, of the 3rd Heavy Brigade Combat Team, 1st Cavalry Division.

Trust is still developing between Iraqi and American forces, according to U.S. and Iraqi soldiers interviewed in Mosul.

Sgt. John Thompson said he has a good working relationship with many of the Iraqi soldiers he patrols with, though he is still cautious around them.

But learning to rely on each other is the only option moving forward, he said.

Iraqi army Lt. Ali Mehsin, who works in Mosul, said American help has been key to making security gains in the area but he is noncommittal when asked if he trusts American soldiers.

In part because of the continuing security problems in Mosul, the Iraqi army controls large swathes of the city and local police have been slow to develop. Police forces are still undermanned and undersupplied, driving around in rickety, unarmored pickup trucks that offer almost no protection against deadly roadside bombs.

"What we&#8217;ve got to improve is the Iraqi police," said Col. Gary J. Volesky, who commands Army operations in Mosul.

And, in Mosul as well as other parts of Iraq, insurgents have infiltrated the police force.

Thompson was patrolling Mosul recently when someone chucked two grenades at the Mine Resistant Ambush Protected (MRAP) vehicle in which he was riding. Iraqi police nearby did nothing to help and didn&#8217;t seem surprised by the attack, raising Thompson&#8217;s suspicions.

"The (Iraqi police) right now are shady," said Thompson, who added that Iraqi soldiers are far ahead of their police counterparts.

Police are particularly vulnerable to insurgents because unlike soldiers who do tours around the country, they patrol the areas in which they live, Bradley said.