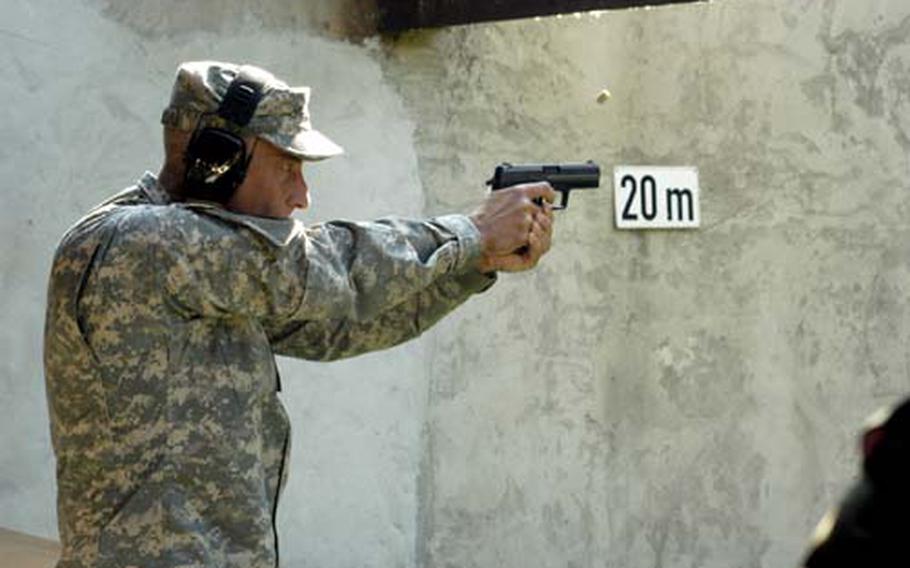 WORMS, Germany &#8212; Sixty competitors from the German and American armies and the German and French police took turns showing their shooting prowess this weekend in a contest set up to honor a man who helped to bring them all together.

For 17th years, Jozsef Wetzl, who was born in Hungary, served as the political adviser for the 5th Signal Command, establishing contacts and working to strengthen German-American relations. Wetzl was instrumental in the move of the 5th Signal &#8212; now based in Mannheim and Wiesbaden &#8212; from Worms, and he continued to maintain a close friendship with the city until his unexpected death last year.

Saturday, the Reserve Camaraderie of the Bundeswehr in Worms took time to remember Wetzl by hosting the 2nd International Joe Wetzl Shooting Challenge.

&#8220;For the last eight to 10 years, we have hosted a friendly shooting competition,&#8221; said Hans Hildenbeutel, an organizer of the event and a sergeant major in the German reserves. &#8220;When Joe died, we realized that we must have the competition in his name.&#8221;

In the rifle event, 15 shots were fired from a distance of 100 meters broken down into prone, kneeling and standing positions.

&#8220;It is interesting to see different types of standing and kneeling techniques,&#8221; said German army 1st Lt. Christoph Hartmann, the rifle range officer. Hartmann, who has eight years of experience with the G36, said he studies the American techniques and will ask his snipers to try them out later.

Sgt. 1st Class Erica Lehmkuhl of the 72nd Signal Battalion in Mannheim said the rifle was a very user-friendly one, but noted the pistol was a challenge because Saturday was her first time firing one.

With competitors snatching up bratwurst from the grill and waiting for the competition to be over so they could enjoy a cold one with their international brethren, it was hard to tell there was a competition going on. As for who won, does it really matter?