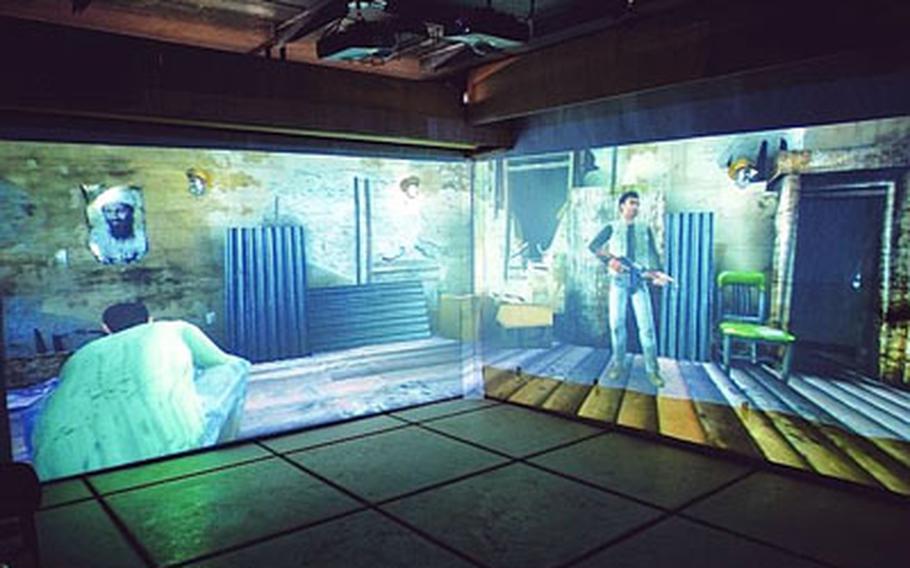 The shoot house in Vicenza, Italy, is now equipped with the most modern technology available. Scenarios from the "America’s Army" Live Fire Virtual Targeting system are projected on paper rolls strung up in front of walls. (Photos courtesy of Joint Multinational Training Command)

The shoot house in Vicenza, Italy, is now equipped with the most modern technology available. Scenarios from the "America’s Army" Live Fire Virtual Targeting system are projected on paper rolls strung up in front of walls. (Photos courtesy of Joint Multinational Training Command) 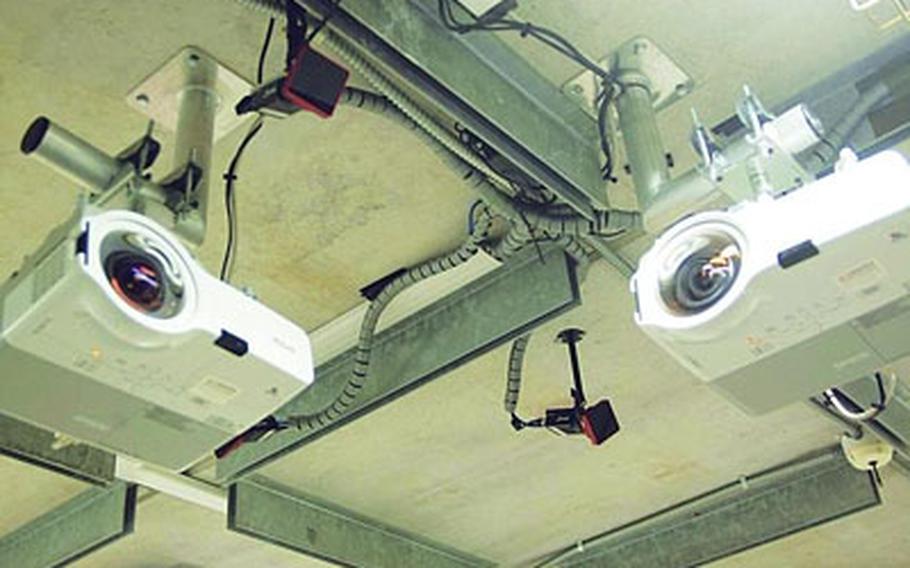 Projectors place the video scenario on the paper rolls and sensors detect the infrared light that is emitted every time a bullet punctures the paper. ()

VICENZA, Italy &#8212; When the 173rd Airborne Brigade Combat Team returns from the field later this month, a state-of-the-art shoot house will be waiting for them.

These indoor training facilities &#8212; there are only four worldwide &#8212; are used by soldiers to practice clearing homes in an urban environment, and the brigade&#8217;s version is the first portable facility.

The shoot houses are versions of a first-person shooter game called &#8220;America&#8217;s Army,&#8221; which was developed seven years ago as an online recruiting tool. The Army then adapted the software to create the Army Live Fire Virtual Targeting system, which enhances urban combat training for soldiers. The first shoot house to use the system was fielded at Fort Bragg, N.C., in 2007.

In the video system, scenarios are projected on the walls of the shoot house, showing life-sized characters in an urban environment. Soldiers then must make a decision on how to properly handle each scenario.

Previously, soldiers would have to shoot at paper silhouettes or mannequins during training. The targets could pop up, be stationary or placed on tracks to simulate movement. Now, the targets look like real people who are moving freely along the wall. Vicenza&#8217;s version of the software has three scenarios, with three levels of difficulty. In some, soldiers have to try to avoid shooting a hostage. In others, it&#8217;s unclear whether a person is a target or not. All scenarios feature the sounds of gunfire and screaming designed to add confusion and heighten tension.

Unlike the other three shoot houses, Vicenza&#8217;s does not allow soldiers to use live ammunition.

So instead of projecting images from the computer on a heavily reinforced wall, large rolls of paper have been strung up in front of the walls, and infrared sensors register bullets passing through the paper. The sensors indicate whether the game characters have been hit, and the targets respond accordingly.

In order to allow soldiers to use the same weapons they&#8217;ll use in Afghanistan or Iraq, the bolts are swapped out and wax bullets are used.

Because heavily reinforced walls are not necessary, the Vicenza facility costs about $250,000, one-fourth the cost of the Fort Bragg shoot house. Plus, it&#8217;s somewhat portable.

So it could be used by troops downrange in a hangar or warehouse. It could also work well for National Guard or Reserve units in the States, which generally don&#8217;t have access to shoot houses where live ammunition can be used, said Col. Casey Wardynski, who runs the America&#8217;s Army program.

Members of Wardynski&#8217;s team visited Vicenza recently to make a few alterations after installing the system earlier this summer. The 173rd is training in a mission-rehearsal exercise in Germany, and could start sending troops through the shoot house when the soldiers return in a few weeks.

In addition to the three scenarios already built into the game, developers are designing a fourth scenario with the help of 173rd soldiers. The new game scenario is based on a real encounter the brigade had in Afghanistan. Each scenario costs about $20,000 to create and can be shared by all the centers using the program.

Wardynski said while characters in the other scenarios look &#8220;a bit cartoonish,&#8221; the new ones would look more realistic ... and there&#8217;s still room for advancement.

For example, though the bad guys appear to be firing at the troops, none of the shots register. He said he believes that it should be possible to place sensors on troops that could indicate they&#8217;d been hit.

The Army has four versions of the system in regular use. In addition to Fort Bragg and Vicenza, Fort McClellan, Ala., and Fort Leonard Wood, Mo., have programs running. A fifth is under construction at West Point.