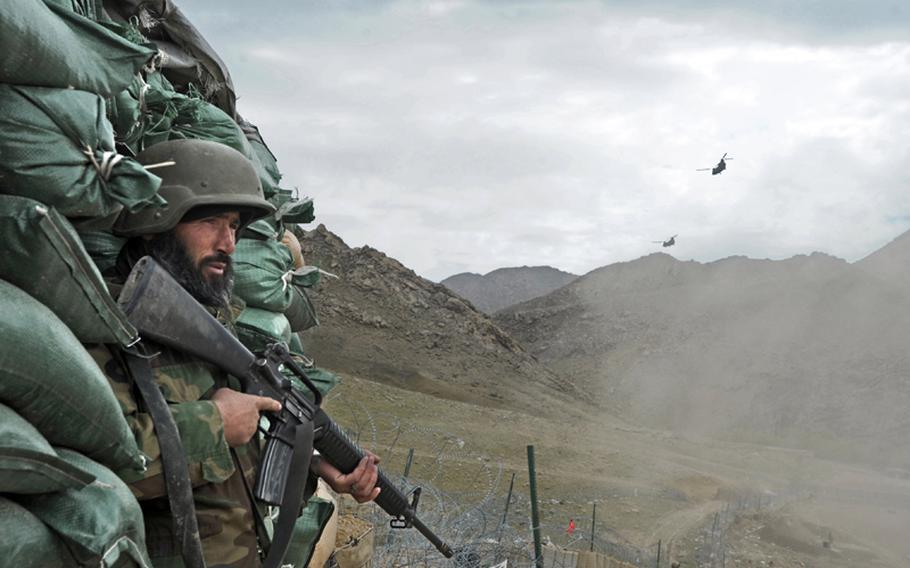 KANDAHAR AIR FIELD, Afghanistan &mdash; The Black Hawk helicopter that crashed last week, killing all four U.S. soldiers aboard, was likely shot down by insurgents, according to sources with knowledge of the crash.

The armed UH-60L Black Hawk went down in Helmand province around 9:40 p.m. Thursday while supporting a medevac chopper on a mission to pick up Afghan policemen wounded by a bomb. There were thunderstorms and low visibility in the area of the crash that day and it&rsquo;s unclear whether that bad weather also played a role.

The Taliban claimed to have used a &ldquo;rocket,&rdquo; which they sometimes use as shorthand for a rocket-propelled grenade. Such weapons have been used repeatedly against helicopters in Afghanistan.

In the wake of the crash, U.S. military officials said enemy fire was unlikely. On Sunday, the International Security Assistance Force&rsquo;s press desk responded to a Stars and Stripes query by saying it was &ldquo;considered very unlikely that the crash was the result of enemy activity.&rdquo;

But two sources with direct knowledge of the crash and the investigation have since told Stars and Stripes that it now looks more likely that the helicopter was shot down by enemy fire. The sources requested anonymity because they were not authorized to speak to the media.

When asked again Tuesday about the possibility of enemy fire, an ISAF Joint Command spokesman sounded a more cautious tone.

&ldquo;Investigators are looking at all of the variables, but at this time it would be getting out in front of that to say more,&rdquo; Capt. Justin Brockhoff said.

Another ISAF official, Regional Command-South spokesman Lt. Col. David Connolly, confirmed that an &ldquo;Aircraft Shoot Down Assessment Team,&rdquo; or ASDAT, was at the crash site as part of the investigation. But Connolly said that an ASDAT is routinely dispatched to aircraft crash sites in hostile fire zones and is intended to confirm or deny if enemy fire caused a crash. Investigators have not yet reached a conclusion about the cause of the crash, Connolly said.

A memorial service was held Monday and it appeared many soldiers in the audience and giving public speeches about their friends were unaware of the possibility of enemy fire, mentioning weather conditions, instead.

There have been several high profile helicopter crashes in Afghanistan this year. In March, 12 Turkish soldiers and two Afghans on the ground were killed when a helicopter went down in Kabul. And in January six U.S. droops died when their CH-53 Sea Stallion helicopter crashed in Helmand province.

In the deadliest day of the Afghan War, 30 Americans and eight Afghans were killed on August 6, 2011, when insurgents shot down a CH-47 Chinook helicopter.