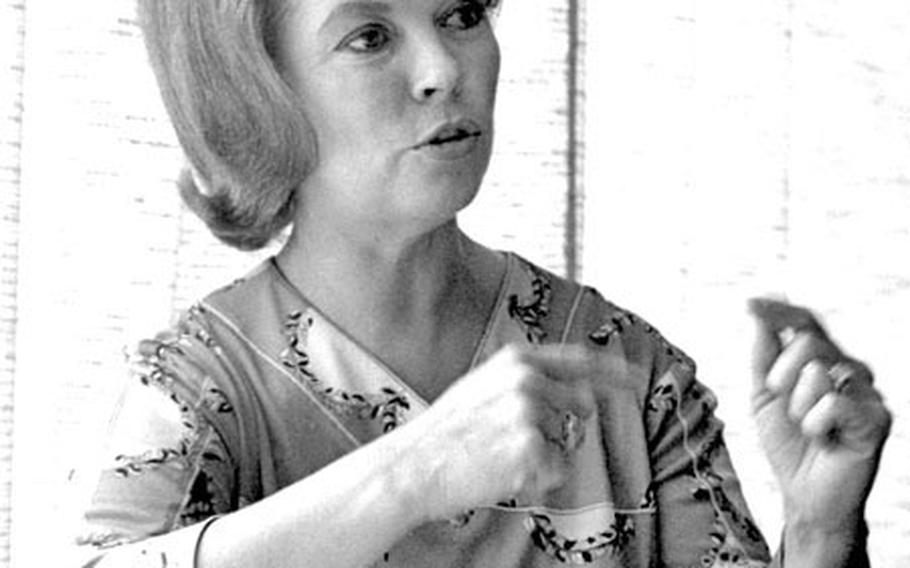 She has a 16-year-old son who stands 6-foot-1 and worked all summer to buy his first car; a daughter in college and a teen-aged daughter who wouldn't mind being a pop singer.

A double chin has been added to the famous mischievous dimpled smile and she admits to being a little overweight, but doesn't worry about it much. She's a Woodside, Calif., housewife and loves that role. She'd rather worry about her involvement in "public service" — meaning both politics and fighting against disease — than worry about high fashion.

But after nearly two decades of retirement from stardom, fans of Shirley Temple Black refuse to give up the captain of the Good Ship Lollipop.

Wherever she goes people still flock for autographs — the autograph of Shirley Temple, not Mrs. Charles — Black. Daily mail deliveries still bring her dozens of fan letters, a new generation of Shirley Temple fans who want photos of the "little Shirley" and the "big Shirley," which "unfortunately I don't have," she apologizes.

AN ACTRESS at 3, a star at 6, the most photographed human being on earth at 8, and number one U.S. box office draw, winner of four Academy Awards and millionairess at 12, Shirley Temple, at 40, remains an enigma.

At luncheons and dinners people stare — especially other women from her generation — as if they're trying to see once again the magic little girl of their childhood who made everything turn out happy ever after. It's hard to tell if they're disappointed or relieved when they say, "Why, she doesn't look like Shirley Temple. She looks just like us."

She's forebearing about being a curiosity and makes the best of it.

"I think a lot of people think of me as a relative. I'm someone they've known since they were little. They feel at home with me. I hope they think of me as a friend too," she said during an interview high above the Main River in her Frankfurt hotel room last week.

She was in Frankfurt as an emissary of the Republican National Committee, encouraging the 2 million Americans in Europe to remember to vote — a 10-day mission to five countries.

CURLED up in a chair, sipping a Coke, munching potato chips and talking about her past and present, she seemed like the housewife-next-door. She wore a floor-length blue-and-green Hawaiian dress slit to the knee on one side. On some it would have looked sultry. On Shirley Temple Black it looked cute.

She was waiting for her husband, millionaire Charles Black, a marine biologist, to return from Hannover where he was picking up a car for their son. She calls him "Charlie" and said life for her began when she married him.

"I turned out to be exactly what I wanted to be — a wife, a just plain mom. I wanted this kind of life — even when I was a child star." Little Shirley Temple's just something from her past.

"We don't even watch the old Shirley Temple reruns at our house — they've been running for years in the San Francisco area. We all have more important things to do."

FOR THE nostalgic she'll recall the old days — how she was picked at the age of 3 from her dancing school, even though she ran under the piano to hide when the agent came around looking for tiny talents because "I didn't like his looks."

But she'd rather talk about her fight against multiple sclerosis — a crusade she took up in 1952 when her brother George, then with the Army, contracted the disease.

She and two other people formed the International Society against MS and she has traveled in such faraway places as Moscow, London, Paris and Vienna in her efforts to coordinate international research into cause and cure for the disease.

But even more dear to her heart is politics.

SHE FIRST became interested in politics when her husband was recalled during the Korean conflict. "He had been in the Navy in the Pacific during World War II. He was one of the PT boat commanders who didn't make president.

"Anyway, after he was recalled, we lived in Washington, D.C., for two and a half years. During that time I was privileged to known many people connected with the Eisenhower Administration. We knew some of the joint chiefs of staff.

"As happens to anyone living in Washington, you get involved in politics. You want to know more ... to do more.

"I started reading more deeply — magazines like U.S. News and World Report, and such things."

She became what she likes to call a "citizen politician." "There are more and more people in America getting involved in politics. It's part of the nature of Americans, I think. We are an industrious, a busy people — sometimes too busy. And when we see things that we feel are wrong, it's our nature to want to try to help."

For a while she helped by stuffing envelopes, by doing precinct work, by joining the League of Women Voters. Then she got bit by the bug.

THE DEATH of Republican Rep. J. Arthur Younger left a vacancy in California's 11th District, where she happens to live. She entered a primary race for that seat in 1967.

What's-his-name — Paul N. McCloskey — went on to win in the general election, which still annoys Mrs. Black. "I think I could have represented the people better," she says.

In a way she thinks she lost because of her Shirley Temple past. Her presence in a relatively. insignificant political race brought television coverage from France, Germany, Canada and across the United States.

"I think I might have won if it weren't for all the international attention," she said. Then there were the political cartoons.

"Personally, I think they were darling. I adore them, and have kept them all in a scrapbook . but unfortunately they all showed the little Shirley Temple, not Shirley Temple Black.

"Psychologically I think this disturbed a log of the voters in my country who didn't know me — the grown-up Shirley Temple Black. I wasn't able to get to all of them in time.

"My favorite cartoon showed little Shirley in the House sitting between two elderly legislators — one with a very disgruntled look on his face. He was looking at little Shirley and said, `No, I don't know where the ladies' room is.' It was cute. But it created the wrong image."

ANOTHER factor was the money.

"The Democrats wanted go see me beat. They poured money into my opponent's campaign — even though he was a Republican, too. Bobby Kennedy kicked in $50,000 and sent one of his aides go San Francisco to help out with the campaign. For some reason they wanted me beat.

"He (McCloskey) had two half-hour television shows on prime time. I was only able go afford a couple of one-minute and half-minute spots. That all counts."

She said she won the support of a lot of the unions, and of Italian blue-collar workers in the district.

"But I lost the vote of the intellectuals, of the cocktail circuit."

She hedges when asked if she'll run again, saying she doesn't have a crystal ball. But she's quick to add what she'd do differently if she does run again.

"For one thing I'd start earlier. I was the last one to enter. For another thing, I'd find a better campaign manager who would give me better advice than the one I had. In fact, I'm not sure you even need a political manager."

SHE THINKS politicians — or, for that matter, anybody — should say what they mean and mean what they say. And she makes a point of doing just that.

For example, she doesn't like pornography in movies. When she was chairman of the San Francisco International Film Festival in 1966, and the film board refused to bow to her views that the Swedish entry "Night Games" was pornographic and should be eliminated, she resigned.

"It's not that I'm a prude," she explained during her Frankfurt interview. "I don't mind nudity in a film, and I don't mind sensuality. Today's films are frank and honest and I think that's probably good. What I don't like is pornography — or what I think is pornography — things thrown in just to attract the baseness in people."

Although she doesn't have time to watch many movies these days, or even television, she's sorry that there aren't more purely funny and entertaining movies.

She likes a lot of modern music, especially the Beatles, thinks pop art is an effort to "tell the world the artists want something different and new" and isn't against student protests and demonstrations "as long as they are without vulgarity and without violence."

SHE THINKS women should take an active part in politics "because they usually aren't tied down with a regular job, and they can stick more to their ideals because they haven't made so many deals with people."

She hopes and prays the Paris negotiations on Vietnam will end the war which she sees as "a slow Asian dance .for position — both sides hold strong cards, militarily and psychologically. It's a dangerous Russian roulette."

Her quick dry wit and her agility at small talk with anybody and everybody makes her a definite asset to the Republicans, who have already sent her speaking in 30 cities in 13 states since January.

She knows her script well and can rattle off a speech with ease on a moment's notice, including lists of figures on rate of population growth versus rate of national budget increase, and how she's sure her party can handle money better. She doesn't mention much about the complexities of social and urban problems nor how to solve them.

She brings tears to the eyes of women's club members when she tells of her experiences in Czechoslovakia, much of it "off the record" as she's including it in a story for publication with a national women's magazine soon.

"I like a life in public service," she says simply. "The pay's lousy, but other rewards — personal rewards — are great. If I don't continue in politics, I'd like to be with the World Health Organization."