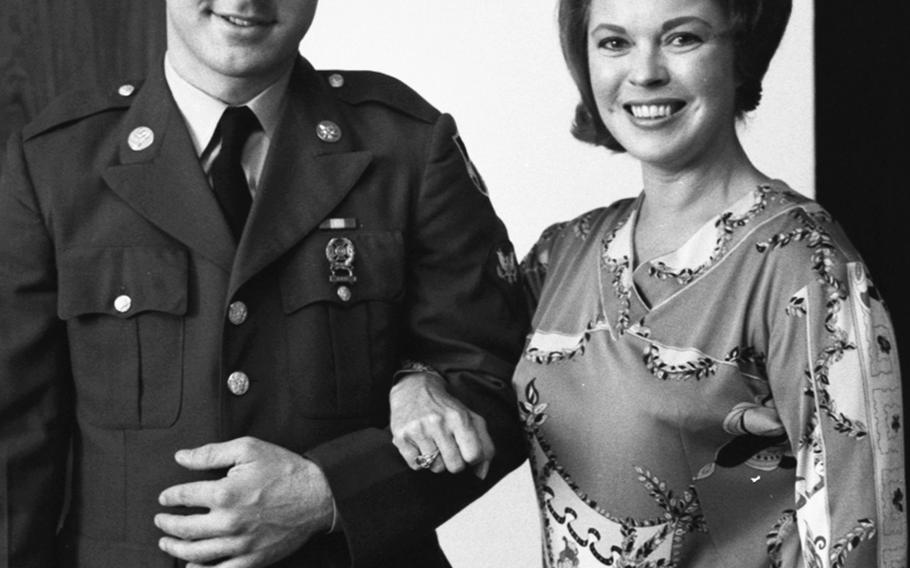 "Are you a relative?"

"No," the blushing 20-year-old soldier in his dress greens replied.

"Did your mother do that to you on purpose?"

"No. My father liked the name Shirley and my mother wanted Temple. So they put them together."

The press conference, disrupted when the soldier came in, continued.

Mrs. Black, on a 10-day tour of five countries to urge the two million Americans living in Europe to vote in the November general election, flew into Frankfurt Wednesday morning for the news conference, a luncheon at the Terrace Club for American women and a fund-raising dinner.

"It doesn't matter who you vote for," she said she tells her audiences. "It really does, but I have to say that."

Topics with newsmen ranged from her visit Tuesday with Gen. Lyman L. Lemnitzer, Supreme Allied Commander, Europe and Commander-in-Chief U.S. European Command, to her belief that "our men in NATO sent home recently should be returned to Europe."

"They shouldn't be returned during a crisis — that might trip a trigger that we'd all regret. They should return under normal circumstances.

"Let's not kid ourselves that our absence from Europe doesn't matter. If our forces are cut down here, what's to stop there being more aggression in Europe?"

She said her experience in Prague during the Russian-led invasion of Czechoslovakia taught her "that we obviously can't trust the Russians. It was obvious they had the most modern equipment, very tight security and well-trained men."

A veteran of one political race (she came in second to Paul N. McCloskey in the Republican primary for a California congressional seat last November), Mrs. Black agreed that television has played a big role in reshaping American politics. She thought the two recent party conventions had too much exposure.

"I think showing highlights might be enough for the viewers. It's too time-consuming to see the blow-by-blow coverage."

She opposes actors and actresses running for public office unless they give up their theatrical careers. "In the first place you alienate half your audience automatically — because half of your fans are going to be of another view. Your show's ratings will go down."

But she didn't object to Gov. Ronald Reagan and Sen. George Murphy (both of whom she starred with in films) running for office without coming up through the political ranks.

"They would have been leaders no matter what their walk of life. It doesn't matter if you work in a drugstore or what. If you have something to offer, that's what matters."