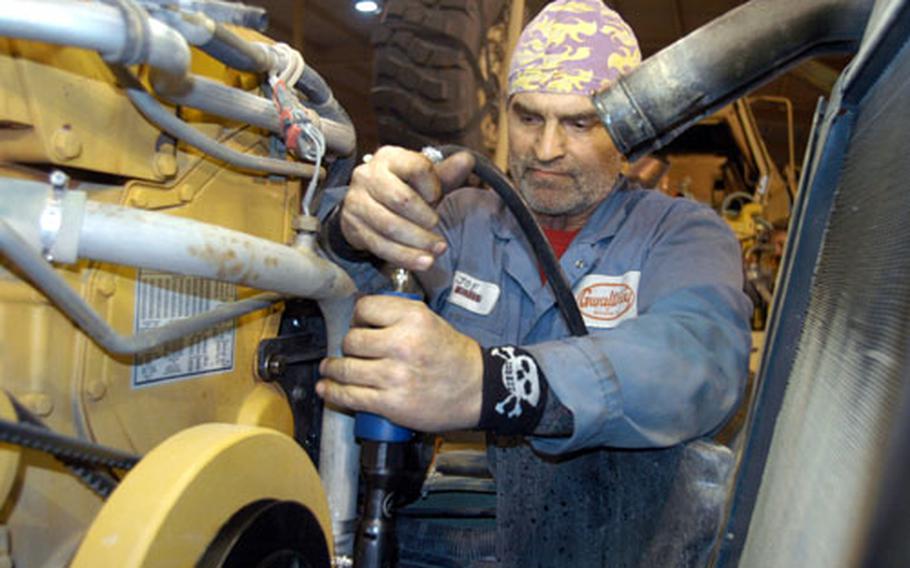 Joe Neuner, a boilermaker by trade at the Norfolk Naval Shipyard in Virginia, volunteered to deploy to Kuwait to up-armor tactical vehicles. "I never was in the military, so I&#39;m helping out by doing this," he said. (Sandra Jontz / S&S)

Joe Neuner, a boilermaker by trade at the Norfolk Naval Shipyard in Virginia, volunteered to deploy to Kuwait to up-armor tactical vehicles. "I never was in the military, so I&#39;m helping out by doing this," he said. (Sandra Jontz / S&S) 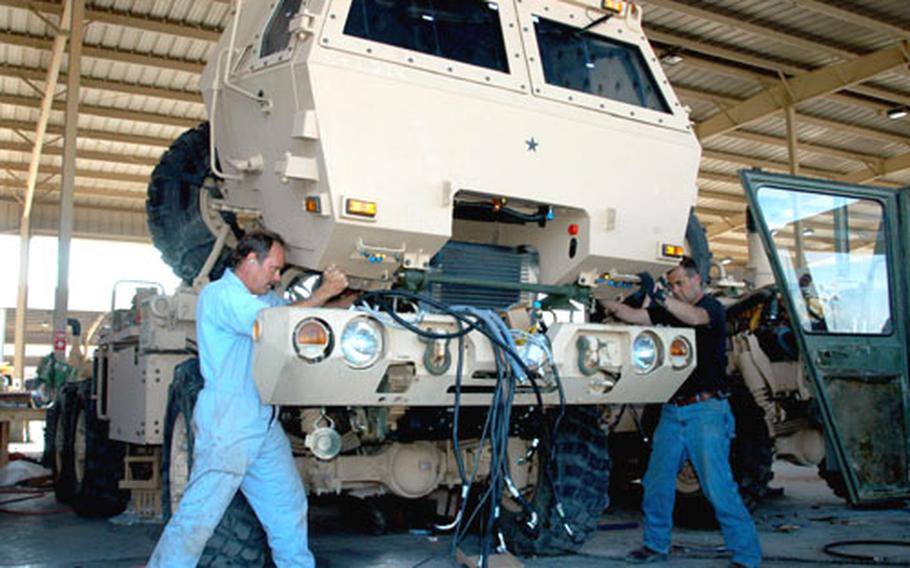 Pat Smith, left, and James Thorn, civilian contractors from the Norfolk Naval Shipyard in Virginia, guide the up-armored cab of a FMTV, or Family of Medium Tactical Vehicles, onto the frame at Camp Arifjan, Kuwait. (Sandra Jontz / S&S) 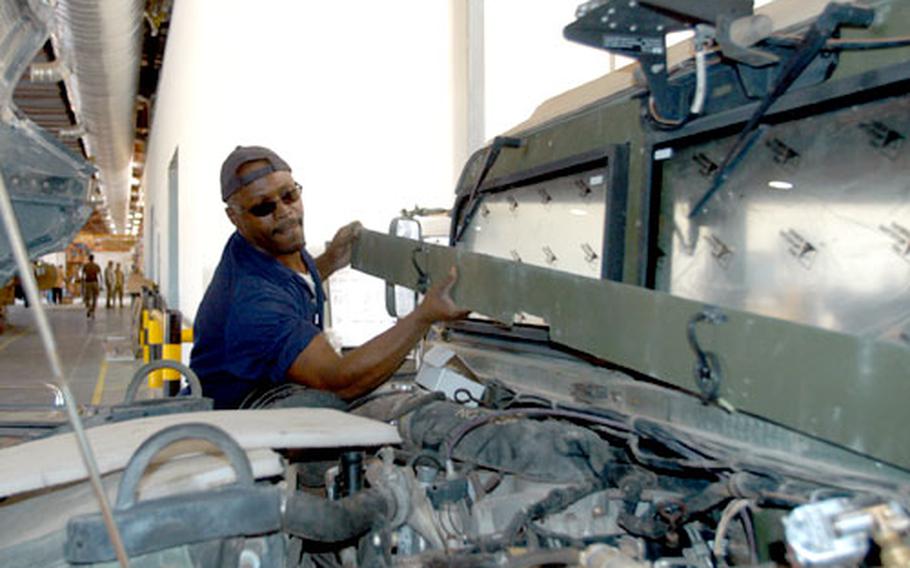 Fred Swayzer, a contractor with L3 Communications Vertex Aerospace, bolts a plate to the front of a Humvee and then will add a ballistic windshield. "It&#39;s a pretty easy process. Just a lot of drilling," he said of the one-man job. He can outfit about seven Humvees a day with ballistic windshields. (Sandra Jontz / S&S)

EDITOR&#39;S NOTE: The following correction to this article ran in Stripes April 18, 2005: "An April 13 story incorrectly characterized workers helping armor vehicles at Camp Arifjan, Kuwait. They are federal employees working for the Department of the Navy."

CAMP ARIFJAN, Kuwait &#8212; While Humvees remain the Army&#8217;s No. 1 up-armoring priority for troops in Iraq, civilian contractors in Kuwait are working around the clock to fortify transport vehicles that carry supplies into the combat zones.

Fifty Norfolk, Va.-based civilian contractors are in Kuwait working 12-hour shifts to replace factory-made cabs on the fleet of FMTVs, or Family of Medium Tactical Vehicles, used by troops.

But they know their job is a serious one.

Continued insurgent attacks in Iraq hiked the demand for armored tactical vehicles, including transporters. The demand, in turn, prompted a third deployment extension for the shipyard workers, Thompson said. First, they were set to go home March 28, then May 28. Now it&#8217;s a Sept. 28 go-home date for the crew of mechanics, riggers, pipe fitters, toolmakers and more, Thompson said.

While the Army is falling short of its goal for the number of factory-armored Humvees, the installation sites in theater are nearing their goal of retrofitting existing vehicles with armor plating, said Randy Hughes, division chief of forward repair activity of the Anniston Army Depot out of Anniston, Ala. He declined to give the specific number completed.

The Camp Arifjan shops are tasked with up-armoring eight types of military wheeled vehicles in addition to the Humvees, Hughes said. It&#8217;s a daunting task, and only about 4,400 of a planned 11,000 vehicles have been completed, he said.

They work in two shifts seven days a week, with each shift pumping out about 10 up-armored &#8220;Star Wars&#8221; FMTVs, so-called because of the odd-shaped cab formed to better deflect a blast.

Camp Arifjan is the only Kuwait site up-armoring the FMTVs. There are two in Iraq.

The swelter of Kuwaiti summers, where temperatures can reach 120 degrees or more, will be the biggest challenge the crews will face in the coming months, said Dana Winkler, the incoming site manager at Camp Arifjan.

&#8220;We&#8217;re already brainstorming on how to handle it,&#8221; he said. Options include having both crews work at night or draping tarps around the bays.