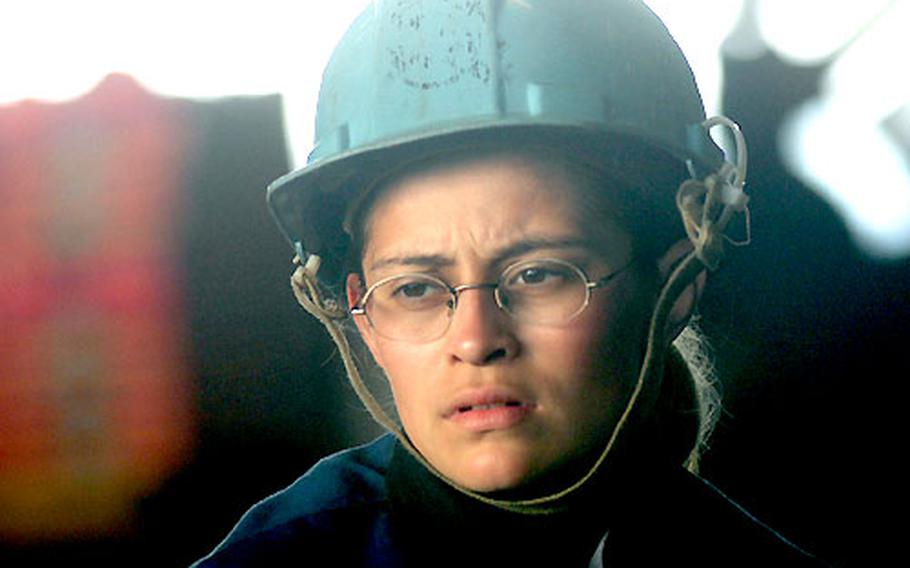 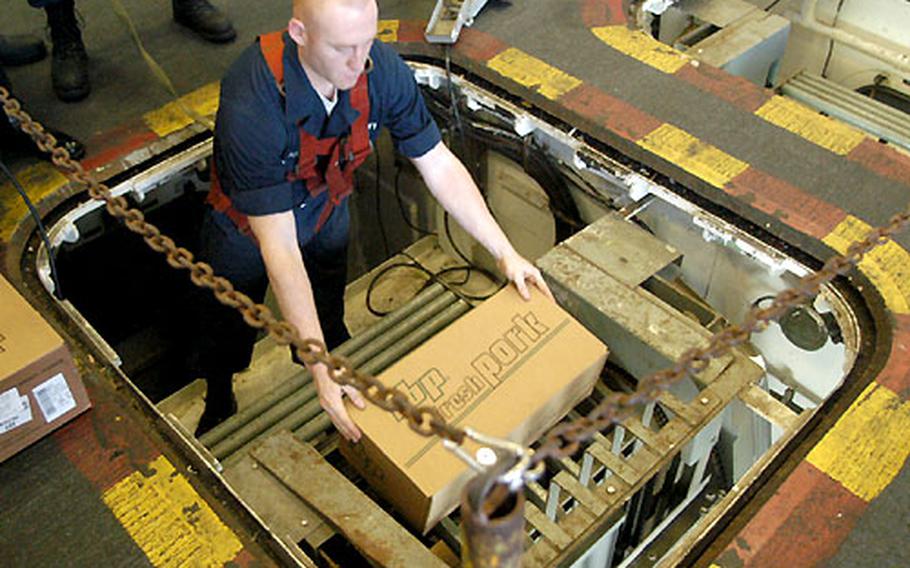 Airman Gary McIntosh lowers food supplies onto a conveyor belt in the hangar bay during an underway replenishment on the USS Kitty Hawk. (Kendra Helmer / S&S) 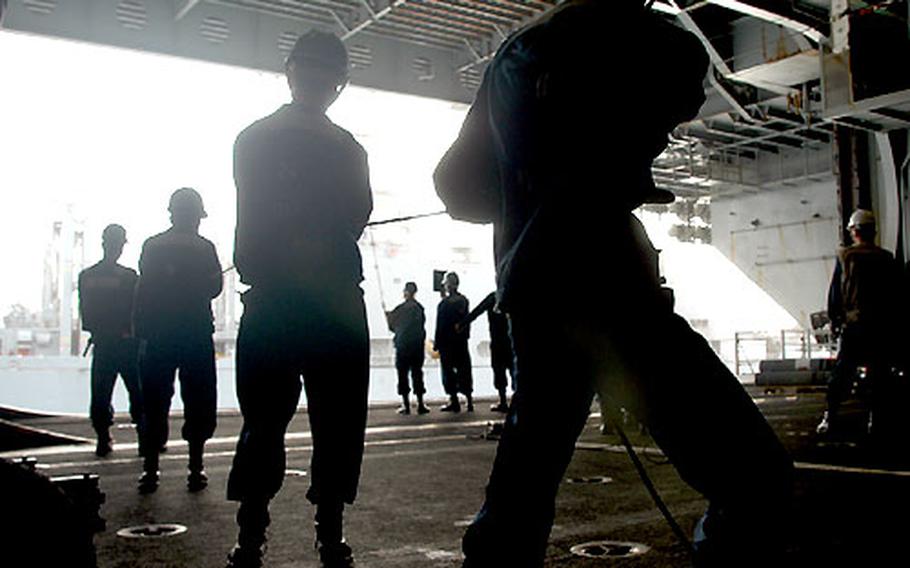 Crew members aboard the Kitty Hawk keep a grip on a 200-foot phone line connecting it to the replenishing ship. The line handlers pull on the half-inch thick line if the ships drift together, and slack it if the ships move apart. (Kendra Helmer / S&S) 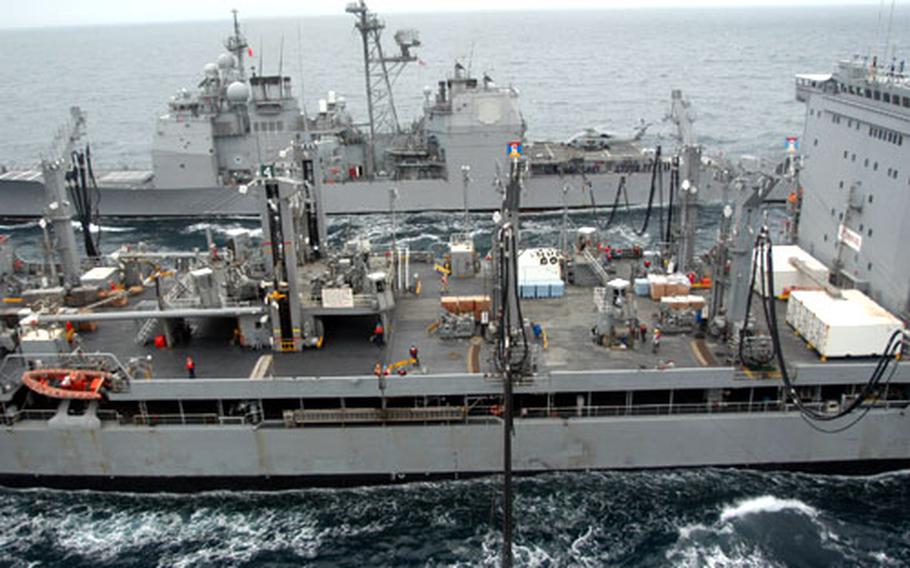 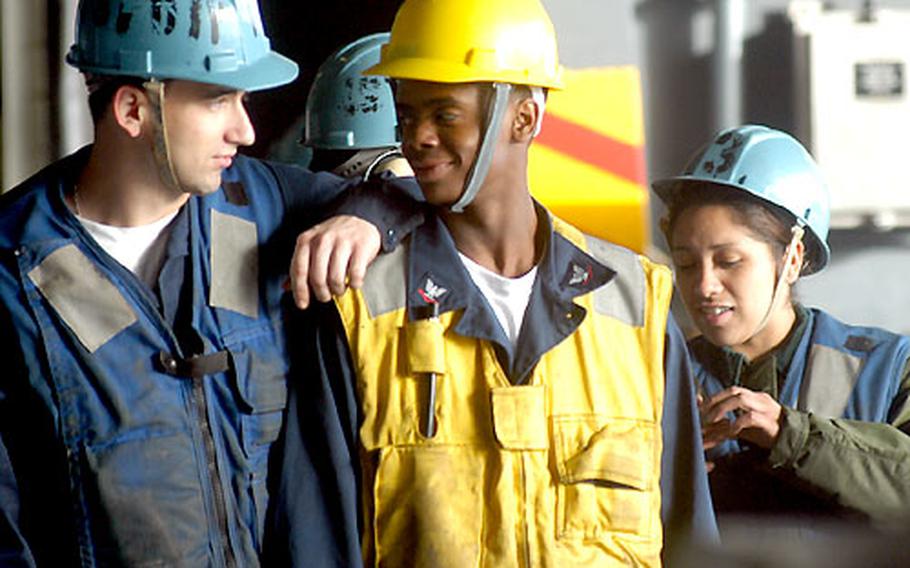 ABOARD THE USS KITTY HAWK &#8212; Petty Officer 3rd Class Rodney Mayes sees himself as the conductor of a symphony.

Near him, Seaman Apprentice Derick Clemmson sees himself as a loser in a tug-of-war game.

The two sailors on the USS Kitty Hawk are part of the deck department team, whose nearly 90 members help get fuel for the ship and its hungry crew.

At least twice a week, the aircraft carrier ties up to other ships for underway replenishments in the northern Persian Gulf. Last week, the USNS Pecos simultaneously refueled the Kitty Hawk and another Yokosuka, Japan-based ship, the USS Cowpens. The USNS Niagara Falls delivered food and supplies a day later.

&#8220;Everything&#8217;s almost the same except what you&#8217;re getting,&#8221; said Senior Chief Petty Officer Elvis Buckhalter, 38, describing the similarities of the two types of replenishments.

First up is a gunner who fires a shot line to the replenishing ship. Its sailors connect the line to a messenger line and send it back across.

On the messenger line are the tools for the replenishment: a phone line and line for the fuel probe (or cable for a trolley for cargo movements).

After everything is set up, Clemmson&#8217;s tug-of-war game begins. At the carrier&#8217;s open hangar doors, he and a few line handlers grasp the 200-foot phone line strung between the two ships so the crews can communicate. The line handlers pull on the half-inch thick line if the ships drift together, and slack it if the ships move apart.

About 20 feet away are the riggers, four at each station. During underway refuelings, they wait for snakelike fuel hoses to come over and then hook the probe to other hoses and a pipe leading below deck.

During supply replenishments, they assemble the rig that brings over the cargo. As the cargo clears the deck, the riggers steady it and make sure it lands safely.

Overseeing some of the riggers for just the fourth time Saturday was Mayes, grinning about his job during breaks between his rig captain training.

Sailors on the other ship hook the cargo to a trolley attached to the wire.

After it slides to the carrier, a sailor lowers it. Mayes yells, &#8220;Riggers in!&#8221; and it is released. The trolley lifts up and the gear heads back to the replenishment ship. It takes between two and eight minutes for the trolley to complete a round trip.

Also swarming about the flight deck are safety officers such as Petty Officer 2nd Class Matthew Kotch, 23, a boatswain&#8217;s mate.

They mainly watch UIs &#8212; short for sailors under instruction &#8212; and stand ready to jump in if something doesn&#8217;t look right. A hospital corpsman also stands ready.

While the deck department normally steers the ship, during underway replenishments, it&#8217;s the job of a navigation department master helmsmen to keep the ship on a straight course, said Petty Officer 1st Class James Hancock, 32, a quartermaster who has been driving ships for 12 years.

While part of the crew works through the process, others just enjoy the show.