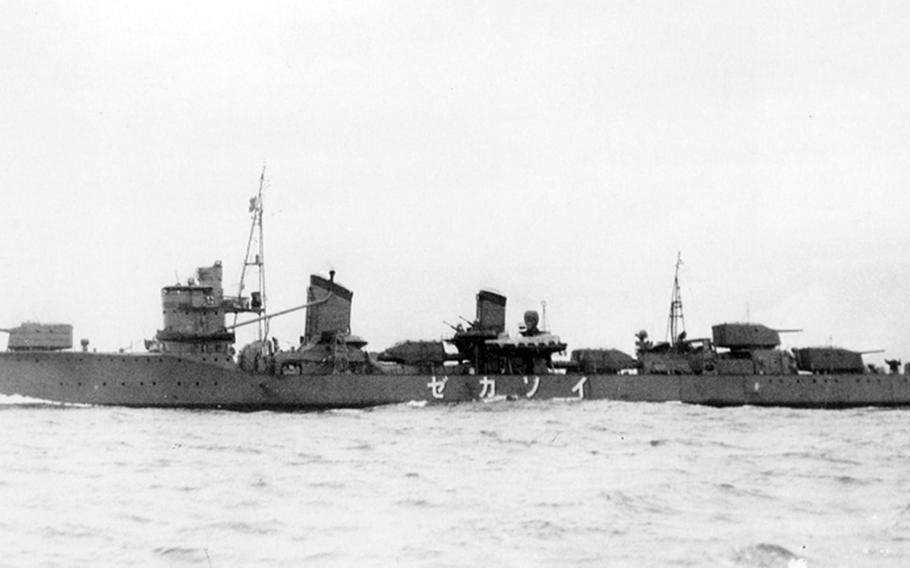 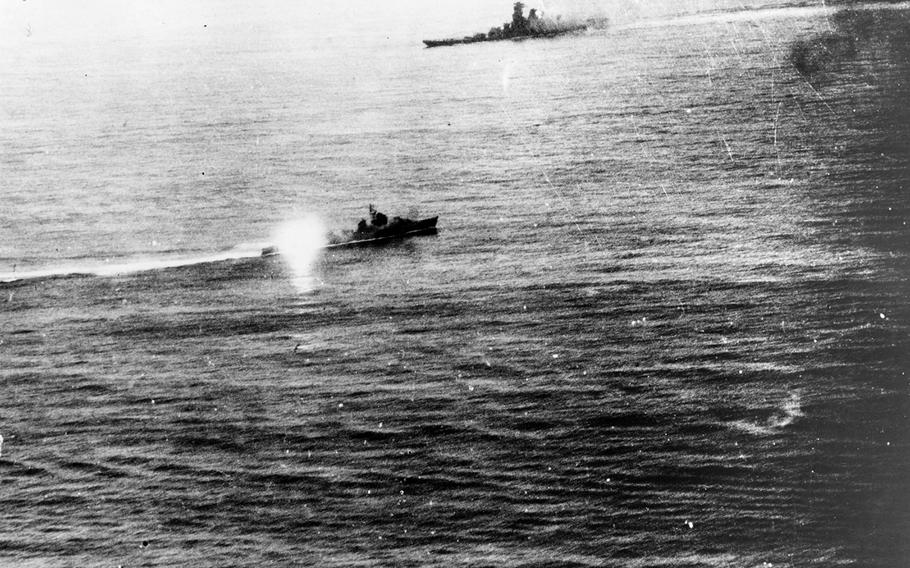 The Japanese battleship Yamato, top, and a destroyer in action with U.S. Navy carrier planes north of Okinawa on April 7, 1945. (Courtesy of U.S. Naval History and Heritage Command) 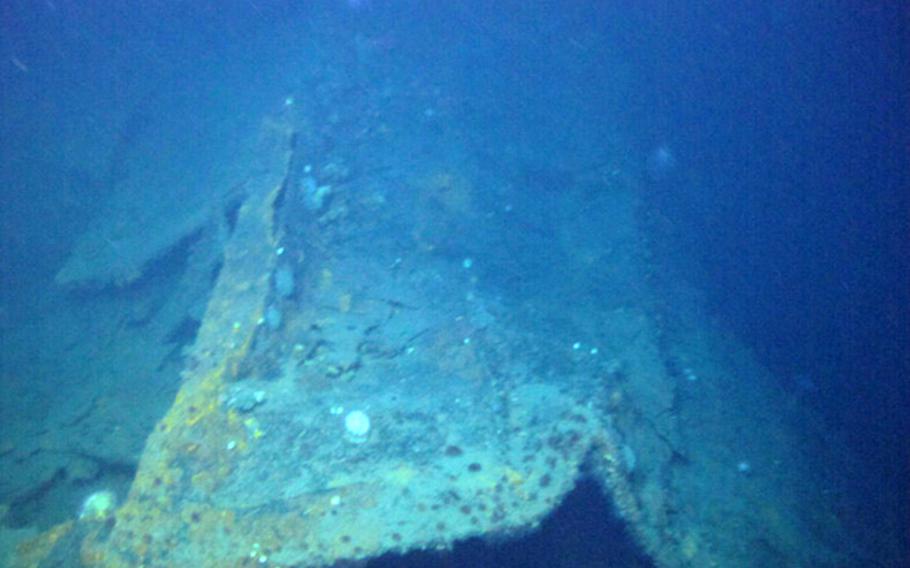 Historians and salvage experts say this photo, taken on May 28, 2016, depicts the Imperial Japanese destroyer Isokaze, which sank alongside the superbattleship Yamato at the end of World War II. (Courtesy of Fukada Salvage & Marine Works)

CAMP FOSTER, Okinawa —An Imperial Japanese Navy vessel that took part in the attack on Pearl Harbor has been found submerged off Japan’s southern coast.

The discovery was kept from the public until this month to distance the find from a highly publicized survey on the legendary World War II superbattleship Yamato, which was found nearby in the 1980s.

“This is the first time a ship that sank with Yamato has been found,” Hanato said. “It is a valuable resource.”

The Isokaze is among the most historic World War II vessels ever located. In addition to protecting the Japanese fleet as it approached Pearl Harbor, the destroyer participated in the battles of Midway, Philippine Sea and Leyte Gulf. It was sunk on April 7, 1945, alongside the Yamato and four other Japanese vessels as they steamed toward Okinawa and subsequently headlong into the advancing U.S. military.

‘A symbolic destroyer’ The Isokaze’s construction was planned to coincide with that of the Yamato, said Kazushige Todaka, director of the Kure Maritime Museum, also known as the Yamato Museum. The destroyer was ordered in 1937, built at the Imperial Navy’s Sasebo naval dockyard and commissioned in 1940.

It was 364 feet long and 35 feet wide, according to Japan’s Chugoku newspaper. Its standard displacement was 2,500 tons.

The ship suffered major battle damage during the countless engagements it participated in, yet somehow, after repairs, continued to fight, surviving until nearly the end of the war.

“It is the Imperial Navy ship that experienced the most fierce battles,” Todaka said. “It is a symbolic destroyer.”

The Battle of Okinawa began on April 1, 1945. In response to the American invasion, the Japanese Navy launched Operation Ten-Go, which sent a diversionary naval force south from the Japanese mainland, across the East China Sea and toward Okinawa. The plan was to lure U.S. forces away from the islands and facilitate kamikaze attacks.

The operation was thought to be a suicide mission because the column of ships would have little to no air support. The group was spotted almost immediately and shadowed by U.S. Navy aircraft.

American carriers launched 386 planes against the ships, according to the U.S. Navy. The Isokaze sustained incapacitating damage that killed 20 of its 364 sailors, according to Todaka and the Chugoku newspaper, citing the battle report.

The crew abandoned the ship, and it was sunk by Japanese cannons and torpedoes to keep it from falling into enemy hands.

In addition to the Isokaze, the Japanese lost the Yamato, the light cruiser Yahagi and destroyers Asashimo, Hamakaze and Kasumi, according to the U.S. Navy. The destroyers Fuyuzuki, Hatsushimo, Suzutsuki and Yukikaze were damaged in the fighting.

Ten American planes were shot down by anti-aircraft fire.

While the plan proved disastrous for Japan and spelled the end of the Imperial Navy, it was able to capitalize on the diversion. Kamikaze fighters crashed into the USS Hancock, killing 62 and wounding 71.

A tall shadow The Yamato was the largest battleship ever built and featured the largest guns ever fielded on the high seas, according to a U.S. Navy fact sheet. Since it was found in 1985 off the coast of Kagoshima prefecture, the ship has captivated the Japanese and historians worldwide. Its legend was solidified with the powerful 2005 film “Yamato.”

In death, as it had in life, the Yamato cast a tall shadow over the ships that slid into a watery grave by its side. Japanese historians say those vessels have been mostly forgotten.

Fukada Salvage & Marine Works has been surveying and launching investigations of the Yamato with various television stations and publishing companies since the 1980s, Hanato said. Detailed battle reports compiled by the Japanese Imperial Navy exist to this day, showing potential locations for the other ships.

“I had always wanted to search for the ships that sank with [Yamato],” Hanato said.

After conducting a 2016 survey on the Yamato at the request of Kure city in Hiroshima prefecture, Hanato asked company management if he could try to find the other ships. He was granted the opportunity, and Fukada Salvage & Marine Works launched its own survey.

On May 28, 2016, Hanato and his team used sonar to search the area where the battle report indicated the ships sank. They had a hit their first day and launched a remotely operated vehicle. Torpedo tubes and damage indicated the ship was most likely the Isokaze. It was found 109 miles south of Danjo Archipelago in the East China Sea, Hanato said.

“I thought, ‘I finally was able to find it,’ ” Hanato said. “We were very lucky.” Hanato hopes the Isokaze’s discovery will aid historical research of the war. He wants to continue searching for other ships that sank with the Yamato.

Hanato said the Isokaze will likely lie undisturbed and continue to deteriorate like the Yamato.

The discovery serves as a potent reminder of the horrors of war for the next generation, Todaka said.

“There are not so many survivors of war now, and the war has become an old tale of the past,” he said. “It gives people the opportunity to see that the war is not something of the past and it is an issue that is related to everyone, even today.”