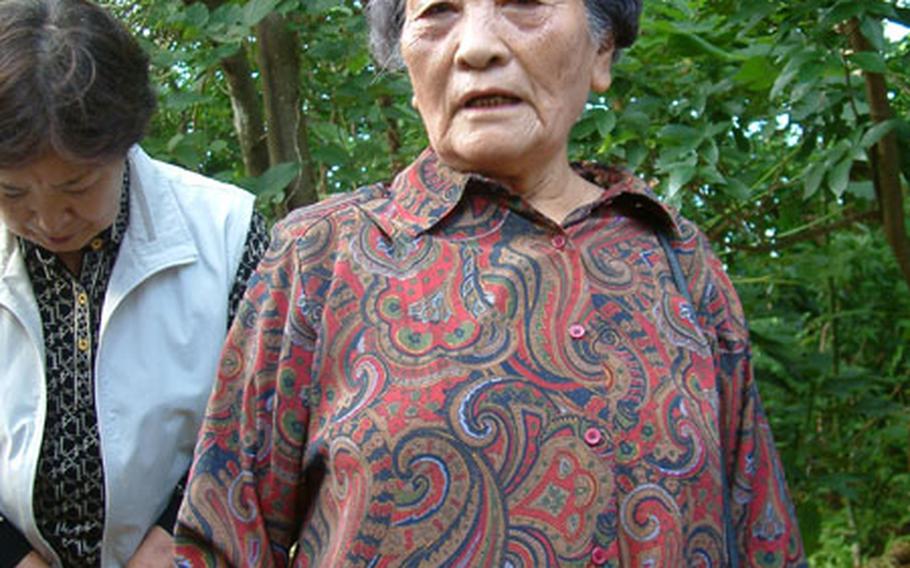 Toyo Fukuji, 80, grew up in the area of the Iibaru Bijuru, a Shinto prayer site rededicated Thursday on Kadena Air Base. (David Allen / S&S)

Toyo Fukuji, 80, grew up in the area of the Iibaru Bijuru, a Shinto prayer site rededicated Thursday on Kadena Air Base. (David Allen / S&S) 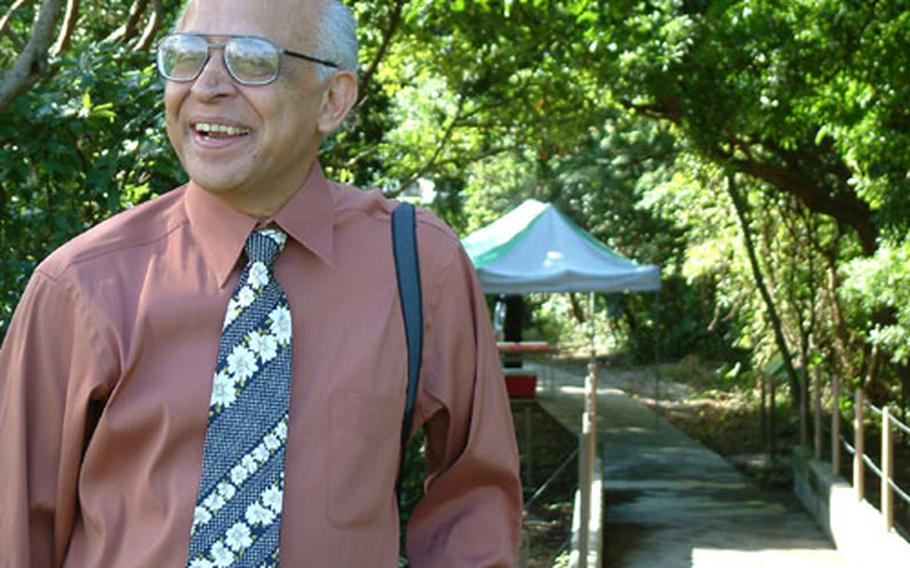 A. Naim Qazi, chief of the Environmental Flight of the 18th Civil Engineering Group, stands near the Ukumagi Bridge, which leads to the Iibaru Bijuru, a sacred prayer site recently restored on Kadena Air Base. (David Allen / S&S)

KADENA AIR BASE, Okinawa &#8212; An overgrown jungle thicket in the middle of this sprawling base has been reborn.

For years, a Shinto prayer site stood virtually inaccessible in a wooded area just off Douglas Boulevard, near the post office.

Once or twice a year, Okinawans, descendants of villagers living in the area more than a century ago, would return to hack a path through the weeds and pray before a sacred stone placed there by their ancestors.

After an exhaustive cleanup of the site and a bridge that leads to it by local Boy Scouts, the IIbaru Bijuru was rededicated on Thursday as a cultural asset and adopted by the local chapter of the Society of American Military Engineers.

The organization promises to continue to care for the site as part of the 18th Wing&#8217;s promise to maintain Okinawan cultural assets, said A. Naim Qazi, chief of the Environmental Flight of the 18th Civil Engineering Group and society vice president.

There are 131 known cultural assets &#8212; shrines, tombs and historical sites &#8212; within the air base, Qazi said, noting 92 will eventually be cleaned and maintained.

About 20 Boy Scouts from Troop No. 102 spent more than 70 man-hours last spring cleaning and making improvements to the shrine and cement bridge over a stream winding its way through a deep gulley at the prayer site.

The Environmental Flight donated the concrete, tools and other equipment.

The area was once known as Iibaru Gumi, a small village settled by the Kiyan and Uehara families in the early 1800s.

At first, the women of the community trekked to the Futenma Shrine on special occasions, such as the birth of a baby, but it was a long trip in those days and they eventually built their own &#8220;bijuru,&#8221; or prayer site, around sacred stones brought from Futenma.

After World War II, the area was appropriated by the U.S. military.

The villagers return at least once a year, Sept. 9 according to the Chinese lunar calendar, to pray.

&#8220;When we came here last month, we were so surprised to see all the weeds were cut down and the site was very well taken care,&#8221; said Toyo Fukuji, an 80-year old former resident who attended the ceremony.

About 30 former Iibaru residents visit the site, she said.

&#8220;It was a customary practice for us to visit the bijuru stone monument at the sacred site to offer gratitude for the births of children and to pray for a good harvest and the prosperity of the community,&#8221; she said.

Fukuji remembered the days when she married and raised her children nearby.

For years, however, visiting the special spot was not easy for some of the senior former residents.

&#8220;We had to bring sickles with us and our first job was to cut down grass and weeds to clear the path and the area around the monument,&#8221; she said. &#8220;We are very grateful for the Boy Scouts and the people here on Kadena who worked so hard to keep this place so nicely. This is our very special place.&#8221;

Heiwa Yaga, chairman of the Okinawa City War Bereaved Family Association, said he remembers growing up in the area and swimming in the stream that ran along the sacred site.

During the rededication ceremony, Col. Steven Lillemon, commander of the 18th CES, praised the adopt-a-monument program.

&#8220;We have the responsibility to safeguard and upkeep the assets that are on Kadena,&#8221; he said. &#8220;We pledge that the citizens of Kadena Air Base will extend a hand to the surrounding community and continue the long-standing commitment to serve as responsible environmental stewards.&#8221;