Shinseki says claims backlog is heading in ‘the right direction’ 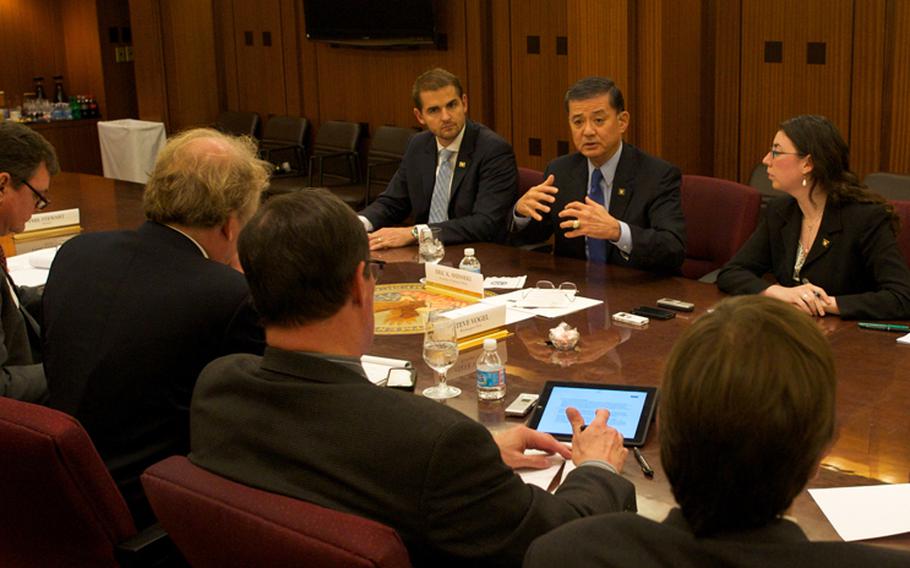 For the first time since Barack Obama was elected president, the veterans claims backlog will end this year lower than it began.

Department of Veterans Affairs officials say they’re on track to end the backlog entirely sometime in 2015.

At the start of December, the claims backlog — the number of cases unfinished for more than 125 days — sat just under 393,000 cases. Critics call that an embarrassingly large number, especially considering that the White House pledged to fix the problem almost four years ago.

But VA officials say eliminating the backlog was always expected to be a multiyear process, with the bulk of the progress coming this year. In March, the backlog total peaked at more than 608,000 cases. More than one-third of that caseload was gone by the end of the fall.

The department also benefited from a slowdown in the number of new claims filed this year, allowing more resources to clear older ones. Fiscal 2013 was the first time in five years that the department processed more cases than it received.

In November, Shinseki told reporters that “this trend line is in the right direction” but “I’m not dusting my hands off and saying this is a done deal.”

More than half of the department’s claims inventory is still in backlog, underscoring the work still to be done.

Based on the nine-month trend, the department could clear out the backlog in early 2015. Last spring, many veterans groups and lawmakers were questioning whether the end of 2015 was a realistic goal.

The department’s current backlog efforts don’t include the growing number of claim decision appeals, which has topped 266,000 cases. Shinseki has promised that will be the next focus for department officials.