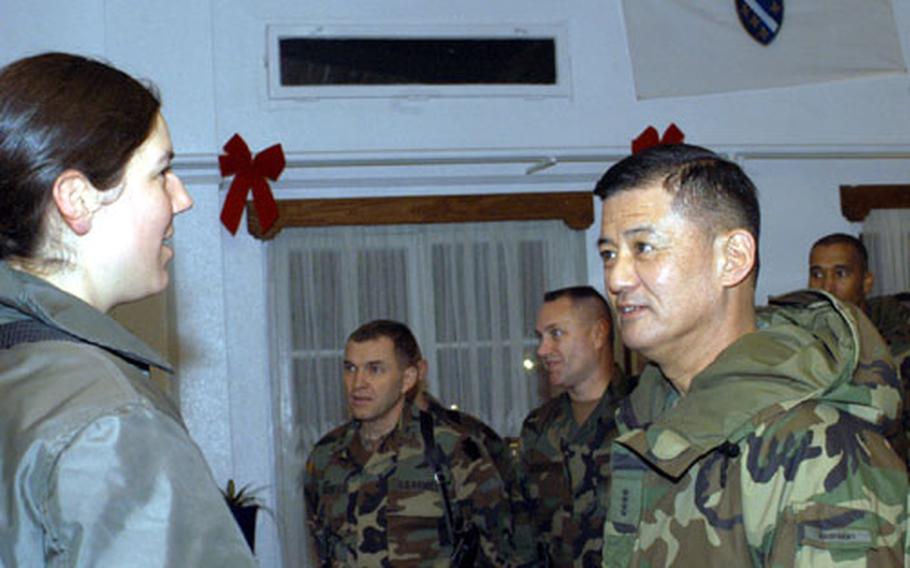 EAGLE BASE, Bosnia and Herzegovina &#8212; Army Chief of Staff Gen. Eric Shinseki&#8217;s holiday visit to American peacekeepers was all about the troops.

The former commander of all peacekeepers in Bosnia took time to find out if the peacekeepers at forward operating bases McGovern, Morgan and Connor, and Eagle Base had hot water and good food, were getting their rest and taking morale passes.

And he wanted to know if they had any questions.

&#8220;To me, he was someone who was genuinely concerned about our Christmas,&#8221; said Sgt. 1st Class Barbara Williams.

For some with doubts about their mission, Shinseki shared stories about Bosnia when he was the commander of SFOR.

One of them was about a riot in 1997 in the northern town of Brcko when U.S. troops stood firmly against Bosnian Serbs who were throwing rocks and hitting them with nail-studded sticks.

Today, it is much different.

Shinseki said that five years ago it was hard to believe that the White Mosque in the town of Srebrenica where Bosnian Serbian forces killed more than 7,500 Bosnian Muslims would be rebuilt.

It was and now stands as a sign of peace and progress.

&#8220;You just see it in a different light when you hear it from a person who knows more,&#8221; the communications specialist said.

Although Powers was hesitant about having dinner with the Army&#8217;s top officer, Shinseki&#8217;s laid-back approach &#8212; as Powers described it &#8212; resulted in a different opinion.

The Army chief of staff also told troops how National Guard and reserve units, which mostly make up the current U.S. contingency in Bosnia, will be used, said Staff Sgt. Hubert Scott of the 336th Postal Detachment.

As of Tuesday, more than 53,000 guardsmen and reservists are serving on active-duty assignments, according to the Department of Defense.

&#8220;The life of privilege that we live is provided by youngsters like you,&#8221; he said to the lower-enlisted crowd at McGovern earlier that day, according to public affairs officers.

With wishes for a Merry Christmas, Shinseki reminded the troops who would normally be with their families for the holidays to keep focused and not become complacent.