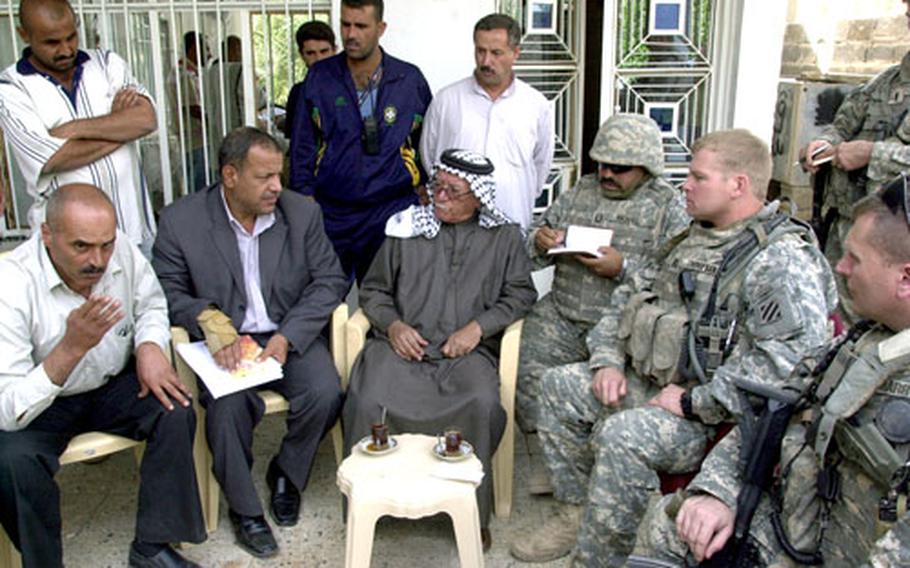 Al-JARA, Iraq &#8212; Most of the community leaders sitting with U.S. soldiers on Sheik Nori Zbar al-Jabouri&#8217;s front porch Thursday were Sunni, but some were Shiite.

That in itself is a small blessing for 3rd Infantry Division soldiers trying to eradicate violent Sunni and Shiite factions from land about 20 miles south Baghdad, east of the Tigris River.

&#8220;Four months ago, they were fighting each other,&#8221; said Capt. Richard Thompson, commander of Company B, 1st Battalion, 15th Infantry Regiment, 3rd Brigade.

The citizens, police and U.S. soldiers have drastically cut attacks and roadside bombs in a roughly 13-square-mile area bordering the river and a major highway link to Baghdad during the past month, U.S. troops and local residents say.

In late July, soldiers met with four Shiite and eight Sunni sheiks at a police headquarters in al-Jara. The sheiks spent the first hour blaming each other for violence and the second hour blaming coalition forces, said Thompson, of West Palm Beach, Fla.

But by the end of the meeting, they were speaking constructively. That led to further meetings and formation of a citizens group with about 15 people.

Within days of its formation, battalion soldiers began giving them gifts and eventually polo shirts and khaki pants for uniforms, along with reflective sashes used for Army physical training.

Membership snowballed from there and energized men like Ahmed Mahood, who began informing U.S. troops of bomb locations and al-Qaida in Iraq hideouts.

Last month, Mahood&#8217;s village had only one small-arms attack and two roadside bomb explosions. Previously, attacks came as often as four times a day, he said.

However, there still is much more needed, says Mahood, whose village lacks reliable electricity, water and kerosene for heating.

Nor is security a lock in 1-15&#8217;s area of operations. Although some roads are far safer, three 1-15 soldiers died recently after their vehicle struck a deep-buried bomb. On Tuesday, Combat Operating Post Cahill came under fire from rocket-propelled grenades and small-arms.

Cahill is a few miles north of Salman Pak, a town of about 25,000 that once was an Iraqi tourist attraction.

Salman Pak, al-Bawi and a significant area to the southeast are settled by insurgents. The battalion conducts aerial assaults but doesn&#8217;t have the resources to hold the area without Iraqi help.

On Thursday, leaders from Shiite-dominated al-Bawi showed up at al-Jabouri&#8217;s home &#8212; something that wouldn&#8217;t have happened prior to the citizens&#8217; group formation.

Sheik Ali Hussein said al-Qaida in Iraq and other groups were weak in al-Bawi, but still dangerous.

When Hussein asked how his town could defeat its insurgents and gain citizen group resources, battalion commander Lt. Col. Jack Marr directed him to his sheik brethren.

Al-Jabouri, who was elected head of all citizens groups in the county-like areas including each sheik&#8217;s village, said it starts with giving U.S. soldiers the intelligence they need. Al-Jabouri said he would consult with any other community leaders in forming their own insurgent resistances.