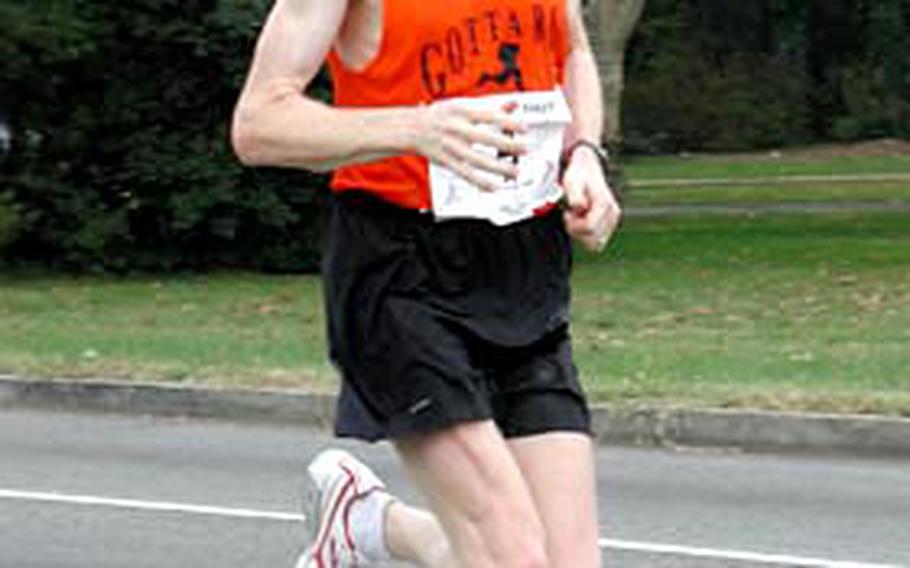 ARLINGTON, Va. &#8212; Army Maj. Jacqueline Chen, a podiatrist at Landstuhl Regional Medical Center in Germany, summed up her efforts in the Marine Corps Marathon on Sunday with two short words.

More than 18,000 runners gathered Sunday in the unseasonably warm and humid Washington, D.C., fall day to run the 28th annual Marine Corps Marathon, enduring blistered feet, cramps, and for some, a dose of humility when things didn&#8217;t go as hoped.

But for some, there were surprises.

Like for Peter Sherry, 35, who thought it was all but over around the eighth mile into the 26.2-mile run. &#8220;I had a cramp and thought I was going to have to drop out. But then I started feeling better and better, and kept plugging away.&#8221;

He ended up winning.

Unlike other marathons, however, there is no cash prize at the end of the Marine Corps Marathon, dubbed &#8220;The People&#8217;s Marathon&#8221; because just about anyone can sign up to compete and there are no qualifying times, just a registration deadline.

Heather Hanscom, 25, a research assistant for the American Red Cross, not only made Sunday&#8217;s marathon her very first ever, but she also was the first female finisher, marking in with a run time of 2:37:59. Her first mission upon crossing the finish line was to search for a Stars and Stripes reporter, who could deliver a message to her father, a civilian working in South Korea, and who would be scanning the paper the next day for any news.

Sometimes, she comes up with an answer, said intelligence officer for the amphibious ship USS Nassau in Norfolk, Va.

&#8220;You forget about the pain and it becomes about camaraderie and a great feeling of personal satisfaction.&#8221;