Shelling in northern Syria intensifies between regime forces and rebels 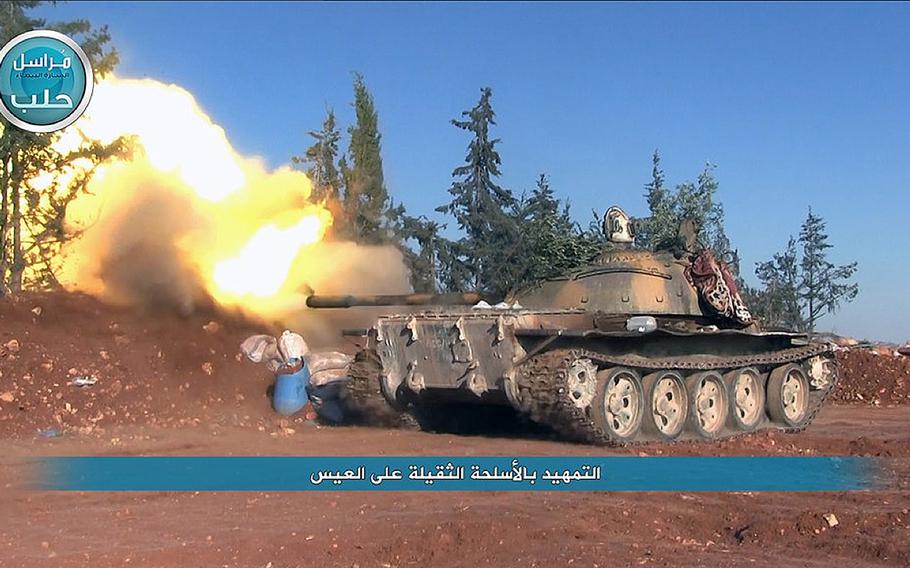 A tank is seen firing in the village of al-Ais in Aleppo province, Syria, in an image posted April 1, 2016, on the Twitter page of Syria's al-Qaida-linked Nusra Front. (Al-Nusra Front)

Meanwhile, a top Syrian cleric has called on Pope Francis and Kirill, the patriarch of the Russian Orthodox Church, to come to Syria to help end the five-year conflict, which has claimed more than 250,000 lives. The two men met in Cuba in February and called on world leaders to help end the persecution of Christians in the Middle East and to stop the bloodshed in Syria and Iraq.

Since the cease-fire took effect at the end of February, each side has repeatedly blamed the other of violating it. But in the past week there has been an uptick in violence, especially around Aleppo, where the opposition has accused government forces and their Russian allies of bombing their positions.

Russia has countered by calling on moderate rebels to disassociate themselves from the Nusra Front, an al-Qaida affiliate, whose fighters are closely intermingled on the battlefield.

This week, Col. Steve Warren, spokesman for the U.S.-led coalition in Iraq, said the situation in Aleppo was “complicated” because the rebel-held part of the city was mainly under control of Nusra, which together with the Islamic State is not part of the cease-fire agreement.

Ten civilians were killed and several dozen injured in a barrage of mortar and rocket attacks on government-held parts of the city on Sunday, the state-run Syrian television network said. It showed footage of destroyed buildings and schools in the city which was once Syria’s commercial capital.

On Saturday, opposition spokesmen claimed that government bombardment of rebel-held areas had killed 27 people. At the same time, the SANA news agency reported that six people died and 25 were injured in rebel shelling of the regime-held section of the city.

Syrian Information Minister Omaran al-Zoubi blamed Turkish, Saudi and Qatari intelligence for the outbreak of hostilities, saying it was part of a plan to undermine the peace talks. The three countries back the main Syrian opposition alliance that has been participating in the United Nations-sponsored peace talks in Geneva.

The Saudi-backed High Negotiations Committee walked out of those talks last week to protest continued government attacks on rebel positions. But Steffan de Mistura, the U.N. envoy to Syria, has dismissed the move as “diplomatic posturing” and said he expects the rebel delegation to return to the talks this week.

Meanwhile, Louka el-Khoury, a bishop and spokesman for the Greek Orthodox Church in Damascus, has urged Pope Francis to come to Syria and help put an end to the bloodshed.

“Yes, we have officially invited him and the invitation is open, but we understand the security situation is difficult,” el-Khoury said in an interview with Stars and Stripes.

El-Khoury noted that Russian Orthodox Patriarch Kirill had visited Damascus soon after the crisis began in 2011 and that Francis and Kirill had jointly called on world leaders to prevent Christians in the Middle East from being “completely exterminated.”

During their meeting in February in Havana the two men also urged world leaders to end violence and terrorism in Iraq and Syria.

“We know they are now praying for us,” el-Khoury said.

Christians, who made up about 10 percent of Syria’s prewar population of 23 million, have been persecuted by jihadist rebels for generally supporting the secular government of President Bashar Assad.