Sheehan to protest at U.S. posts in Germany in March 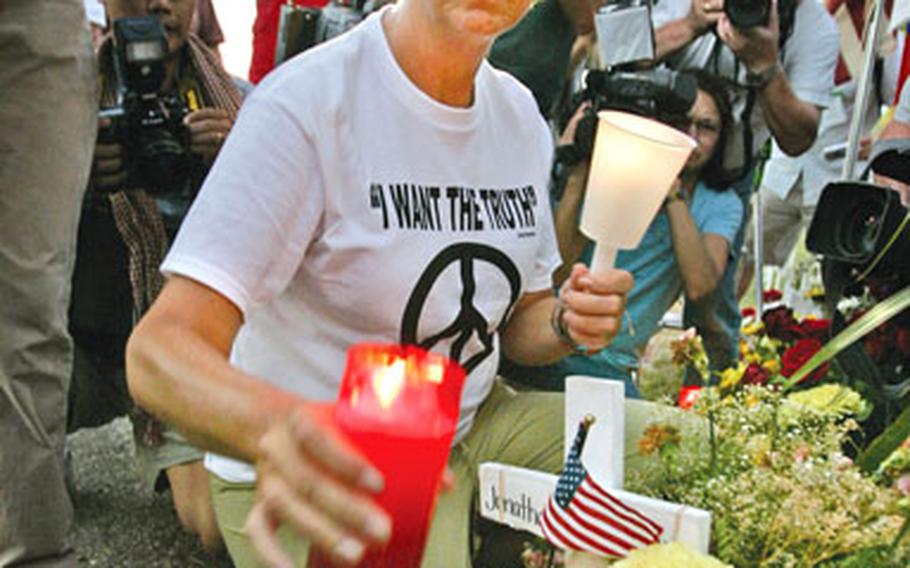 RAMSTEIN, Germany &#8212; Cindy Sheehan, mother of a soldier killed in Iraq and the woman who protested the war last summer outside President Bush&#8217;s Texas ranch, is scheduled to bring her anti-war message to U.S. military installations in Germany next month.

On March 11, protesters plan to walk from Landstuhl Regional Medical Center to a parking lot just outside Ramstein Air Base, where Sheehan will be at a &#8220;camp,&#8221; paying tribute to those who have died in the Iraq war.

&#8220;Cindy will be with us at Camp Casey Landstuhl/Ramstein to call attention to the fact that Germany is Europe&#8217;s logistical hub for the wars in Iraq, Afghanistan and others threatening Iran and the Middle East,&#8221; according to an event flier. &#8220;Germany has the power to stop the further use of U.S. bases in Germany for illegal wars and criminal methods of warfare &#8212; the power and the right to just say no!&#8221;

Organizers are hoping to erect the camp &#8212; known as Camp Casey for Sheehan&#8217;s son &#8212; in a parking lot outside Ramstein Air Base&#8217;s west gate. The parking lot is under German jurisdiction, said Erin Zagursky, an Air Force spokeswoman at the base. Protest organizers are meeting with city officials in Ramstein and Landstuhl to gain permission for their event.

Sheehan&#8217;s goals are to bring the troops home and have peace on earth, she said in an e-mail to Stars and Stripes.

Her son, Army Spc. Casey Sheehan, 24, was killed in Iraq on April 4, 2004. Sheehan said in an e-mail she was too busy for a phone interview with Stars and Stripes.

With the Kaiserslautern military community home to more than 50,000 Americans with military ties, Sheehan could face a rough welcome. When asked for comment Wednesday on Sheehan&#8217;s upcoming visit, several soldiers in Kaiserslautern asked if they could be quoted anonymously.

One soldier, who recently returned from Iraq, did give his name but didn&#8217;t have much to say about Sheehan.

Beginning March 9, Sheehan&#8217;s European visit will take her to Frankfurt, Aachen, Landstuhl and Ramstein in Germany. On March 13, Sheehan is scheduled to have a news conference in Paris, and the following day will address the European Union parliament in Strasbourg, France.

A protest organizer in Landstuhl said he was asked by others, including some of the 732 members of the European Union parliament, to arrange the protest involving Sheehan.

On March 11, protesters would like to bring gifts, such as books, flowers and homemade goods, to the wounded troops at Landstuhl to show &#8220;solidarity to the soldiers wounded in the Iraq War,&#8221; according to the event flier.

Officials at Landstuhl Regional Medical Center have received no requests for the group to visit the hospital or make donations, said Marie Shaw, hospital spokeswoman.

Rassbach said she did not know what response servicemembers would have to Sheehan&#8217;s appearance outside Ramstein Air Base.

March 10: Reception of the mayor and news conference in Aachen