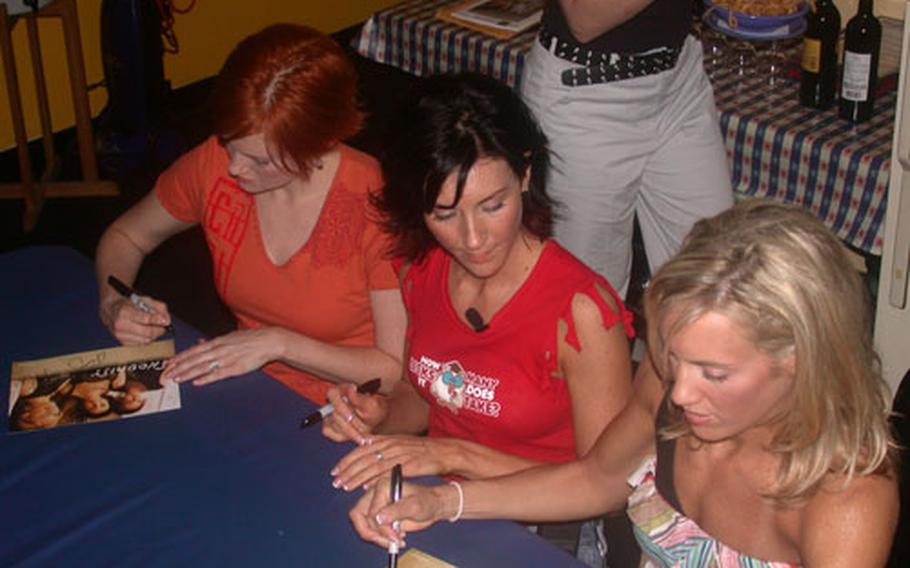 From left, SHeDAISY’s Kelsi, Kassidy and Kristyn Osborn sign autographs for 15 soldiers wounded in Iraq, who were unable to attend the country rock group’s Sunday concert in Alexandria, Va. At the last minute, the soldiers, all amputees, could not get a medical release to attend the concert, hosted by a Washington country radio station. So instead, Lt. Col. Mike Bills, deputy chief for the Army’s DS3 program, or Disabled Soldier Support System, got the sister trio to sign photographs for the soldiers, recuperating at Walter Reed Army Medical Center in Washington. (Sandra Jontz / S&S)

At the last moment, 15 soldiers, all amputees wounded in Iraq, didn&#8217;t get the medical release to attend a benefit concert by country-rock band SHeDAISY, held, in part, in their honor.

But the sister trio went on.

Originally a free show for loyal listeners of a Washington, D.C., country station, Sunday&#8217;s event turned into a concert to honor amputees recuperating at Walter Reed Army Medical Center with a free show and backstage time with SHeDAISY&#8217;s Kelsi, Kassidy and Kristyn Osborn.

Then word came the troops didn&#8217;t get the medical nod of approval.

A new nonprofit organization, Homes for Our Troops, solicited $5 donations from the roughly 675 concertgoers. The event raked in more than $1,500 and several pledges for services, said founder and president John Gonsalves.

Gonsalves is working to develop a nationwide network of skilled professionals who can help make it easier for disabled troops to transition to everyday life, such as installing wheelchair ramps and kitchens and bathrooms tailored to fit their new needs, he said.

After hearing a year ago about a soldier critically injured in an rocket-propelled grenade attack, Gonsalves wondered &#8220;what, as an American can I do to help. I have 20 years in the construction field, and I knew some would have needs for their houses to be changed.&#8221;

People can contact Homes for Our Troops by calling 866-7-TROOPS or visiting: www.homesforourtroops.org.

The Army&#8217;s DS3 program, or Disabled Soldier Support System, worked to arrange backstage passes for the amputees, but had to settle for getting signed photographs of the trio.

In conjunction with the Department of Veterans Affairs, DS3 provides for severely disabled soldiers and their families a system of advocacy and services to transition to civilian life. Troops can ask for help at www.armyDS3.org, or calling toll-free (800) 833-6622.