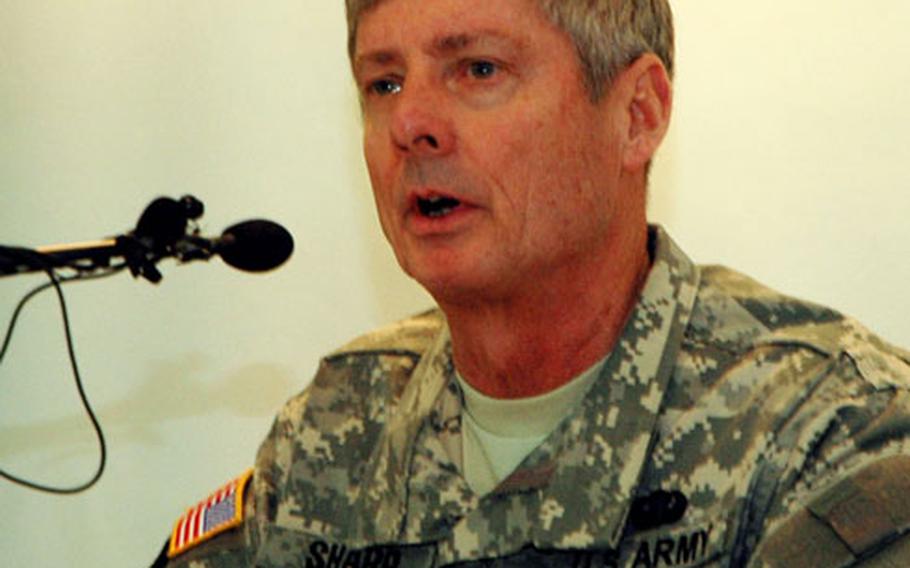 SEOUL &#8212; The top U.S. military commander in South Korea called for North Korea to quiet talk about testing nuclear missiles and instead agree to an open dismantling of its nuclear weaponry.

"We call on North Korea to stop provocations and act like a responsible country," Gen. Walter Sharp, commander of U.S. Forces Korea, said at a luncheon with reporters in Seoul.

Sharp&#8217;s statements were part of a continued response from the United States in recent days after North Korea scrapped military agreements with South Korea and threatened to test another nuclear missile, as it did in 2006.

Next week, Secretary of State Hillary Clinton will visit Japan, China and South Korea, in part to address the rhetoric.

On Monday, Sharp &#8212; who under current agreements would command both U.S. and South Korean troops during a crisis &#8212; said that both President Barack Obama and South Korea&#8217;s President Lee Myung-pak have military and diplomatic options in place to respond to North Korea. And, he added, despite the recent talk, North Korea&#8217;s military seems to be following its usual winter training routines.

Yet a military attack, especially one aimed at South Korea&#8217;s population center in Seoul, would cause casualties before U.S. and South Korean troops could take out North Korea&#8217;s conventional artillery or ballistic missile systems, the general said.

"There still will be destruction in Seoul," Sharp said. "There&#8217;s no doubt about it. We&#8217;ll never be able to take all of them out" before North Korean forces cause damage. "It&#8217;s that threat that we are prepared for."

While Sharp addressed the threats, he also talked about USFK&#8217;s plans to add as many as 12,000 U.S. families to the military community throughout South Korea.

Currently, only about 2,000 of the 28,500 U.S. troops on the peninsula come with military orders that also include moving and living expenses for their families. These "command-sponsored" billets are expected to increase by 2,000 this year toward an ultimate goal of 14,000, Sharp said Monday.

The increase in families also will mean that servicemembers will stay in South Korea longer &#8212; in many cases three years &#8212; up from the current one-year tour. That increase will mean a more efficient force, "where I don&#8217;t have to train a new soldier every year," Sharp said.

Many of the troops and families will be stationed south of Seoul, at an expanded Camp Humphreys in Pyeongtaek, Sharp said. With more troops centralized there, the military will increase efforts to protect the base, such as with air defense missiles, he said.