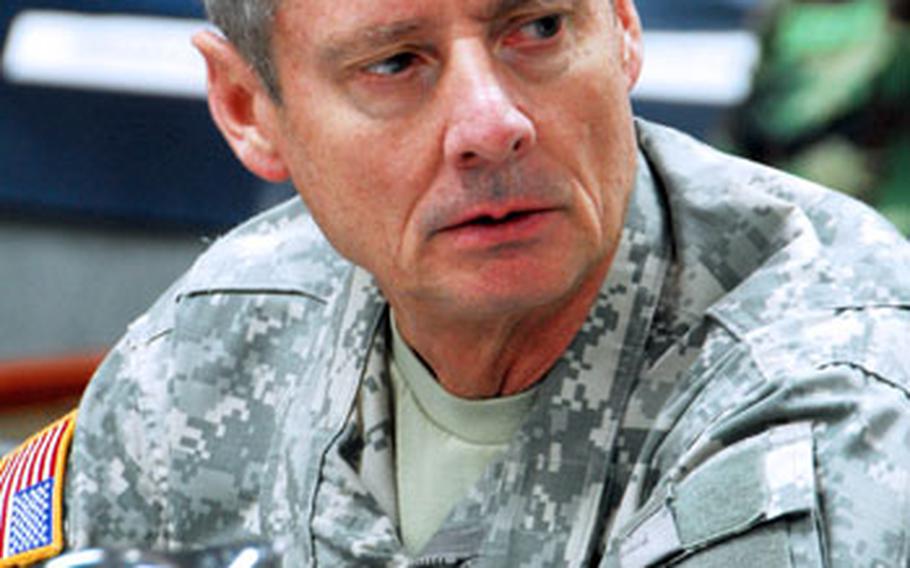 Workers sit inside the technical control room of the Korea Battle Simulation Center&#39;s Walker Center, on U.S. Army Garrison-Yongsan. Behind them is a video teleconferencing screen with links to other bases in South Korea and the United States. Bases in both countries participate in the annual Key Resolve exercise, which includes computer-simulated battle situations. (Ashley Rowland / S&S)

SEOUL &#8212; The top U.S. general in South Korea said Thursday that the two countries&#8217; ability to respond to a North Korean threat will not suffer when South Korea assumes the lead role in warfighting in two years.

South Korea is &#8220;on track&#8221; to take wartime command of South Korean and U.S. forces as scheduled on April 17, 2012, said U.S. Forces Korea commander Gen. Walter Sharp. After that date, South Korea would direct all U.N. military forces in the country during a war, including the 28,500-strong U.S. military presence.

Sharp&#8217;s comments come as some scholars and former military leaders say the change &#8212; known as OPCON transition, or transfer of operational control &#8212; will hurt the unity of command between the two countries.

Sharp disagreed, and said the countries will operate under a single, agreed-upon war plan.

&#8220;What we train for today, what we are training for after OPCON transition, is all the threats we see that North Korea could throw at us,&#8221; Sharp said. &#8220;We constantly evaluate what North Korea is doing, what they&#8217;re saying, what they are vying for now and in the future, and we are adjusting our training to account for that.&#8221;

Sharp and Gen. Hwang Eui-don, deputy commander of Combined Forces Command, spoke at a news conference Thursday, four days after the start of Key Resolve/Foal Eagle, an annual war game for the two militaries. Key Resolve is a computer-based simulation, while Foal Eagle is a series of field exercises.

Among critics of the 2012 OPCON transfer date are 20 retired South Korean generals, who sent President Barack Obama and South Korean President Lee Myung-bak a letter last fall saying that dissolving the joint warfighting command between the two countries would weaken their unity of command.

Retired Gen. Kim Jae-chang, who co-wrote the letter, said Thursday the two presidents never responded to the letter and that the OPCON transfer won&#8217;t help either nation.

Hwang and Sharp, however, described the transfer as changing little between the two militaries except who was in charge. They said the area that needs the most improvement before 2012 is the countries&#8217; ability to share information instantaneously during war so they can make rapid decisions.

Hwang said South Korea has markedly improved in its readiness for the transfer, and is using the current exercise as a way to identify weaknesses and learn from the United States.

Key Resolve, along with a second annual U.S.-South Korean exercise held in late summer, are the largest computer-simulated exercises in the world, said Jude Shea, director of the Korea Battle Simulation Center.

It features about 600 gamers who take on the role of opposing forces, who Sharp said &#8220;are very well-versed in North Korean tactics.&#8221;

Sharp said both South Korea and the U.S. will be responsible for locating and securing weapons of mass destruction in the event of a conflict, though the U.S. has &#8220;unique expertise&#8221; in doing so. American troops specialized in that area are in South Korea for the exercise, and would come to South Korea during a conflict &#8212; something that would not change after the OPCON transfer, he said.

North Korea, as it often has over the years during military exercises in South Korea, has strongly condemned the current training. South Korea and the U.S. also conduct the Ulchi Freedom Guardian exercise in late summer to rehearse what a war would look like after OPCON transfer. This year&#8217;s will be the third led by South Korea.

Sharp and other exercise planners would not discuss the scenarios rehearsed during Key Resolve/Foal Eagle for security reasons but said training was defensive in nature.

Approximately 18,000 U.S. troops stationed in South Korea and around the world are participating in this year&#8217;s exercise, down from about 26,000 last year. Yonhap News reported that about 20,000 South Korean troops are taking part in the exercise, although South Korean military officials would not confirm that number.