Sharp: Date for USFK move to Camp Humphreys being assessed 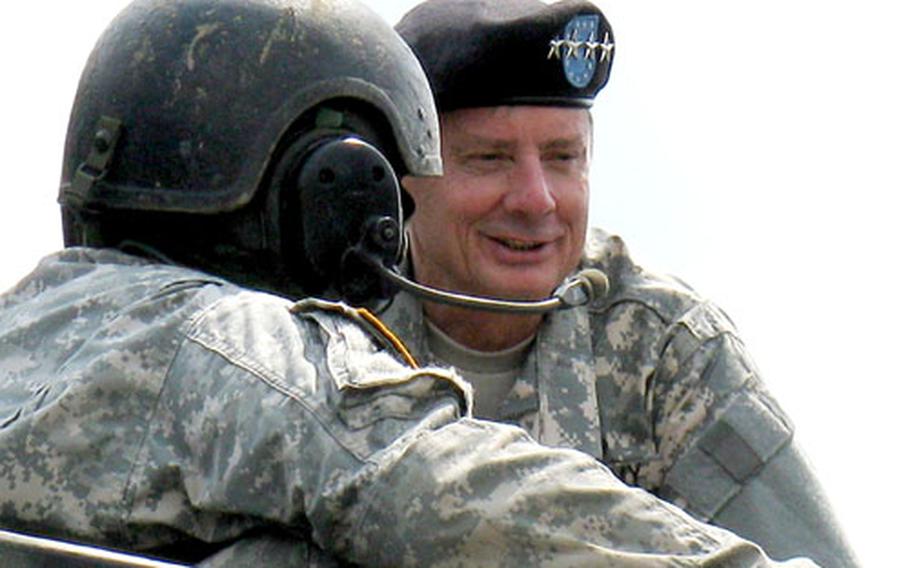 Sharp said he asked a team of engineers for a timetable to complete the base&#8217;s expansion, which will roughly triple its current size. After commanders raised questions, the team is now reassessing the timeline, Sharp said.

The current timeline has nearly all personnel stationed from Seoul to the Demilitarized Zone moving to Humphreys by 2012.

However, the move date has changed several times as contractor and intergovernmental agreements have taken shape. Also, South Korean media have quoted unnamed sources saying that the move could be delayed a few more years.

Sharp said he had already seen a good chunk of preliminary work done on the multi-billion dollar project, which would send thousands of soldiers and their families about 90 minutes south of Seoul&#8217;s Yongsan Garrison.

"I have had no red lights thrown up to me saying that [construction] is really in bad shape," Sharp said. "In fact, I&#8217;ve heard just the opposite, saying it&#8217;s on the right track."

The Camp Casey and Hovey enclave was well-prepared for Sharp&#8217;s arrival. The grass throughout the bases was freshly mowed; tools in the motor pools were carefully lined up; and a fresh whiff of disinfectant wafted over the more deeply ingrained original barracks scent.

"You want to put on a good showing for a commander, or even a high-ranking sergeant major, making sure all is in order &#8230; so they have confidence in you when they know they need you," said Spc. Joey Brown of 2-9&#8217;s headquarters communication section.

Sharp concluded his tour by holding a forum with soldiers and spouses at a Camp Hovey dining facility. Much of the conversation there centered on family support and command sponsorships.

Few married soldiers at Camp Casey have command sponsorships, meaning they must either leave their families in the United States or bring them to South Korea and pay out-of-pocket for housing, off-post schooling and basic needs.

In an interview with Stars and Stripes, Sharp said he will work with lawmakers and Defense Department officials in September on command sponsorship rules.

Sharp said he spoke with six senators and representatives in July who agreed on the need for additional command sponsorships.

"I think what Congress sees now with the rotations in and out of Iraq and the stress we have on our fighting force, the last thing we need is another one-year, unaccompanied place to send soldiers if we don&#8217;t need to," Sharp said.

However, Sharp cautioned that more command sponsorships at Camp Casey and Area I didn&#8217;t mean they would be building a school or hospital at the bases, which will be returned to South Korea following the Camp Humphreys move.

Sharp did say he would press for private school vouchers for Area I families, but couldn&#8217;t promise anything at this point.

Sharp also addressed the rationale behind the recent decision to scrap the former 1 a.m. to 5 a.m. weekend curfew in favor of a 3 a.m. to 5 a.m. curfew.

"I fundamentally believe that if you tell soldiers what their responsibilities are, 99.9 percent will live up to that," he said.

Sharp he will re-evaluate the curfew policy in six months. He said did not have a test threshold for whether the policy is working but would examine incident statistics at that time.