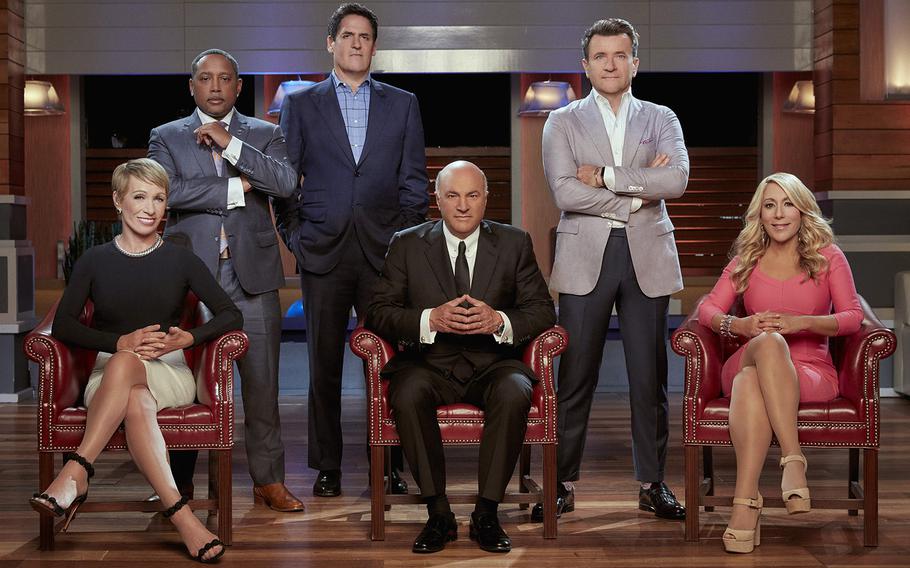 Barbara Corcoran, Daymond John, Mark Cuban, Kevin O'Leary, Robert Herjavec and Lori Greiner are the "Sharks" on ABC's "Shark Tank." The Department of Veterans Affairs is putting on a competition in a format similar to "Shark Tank" to find solutions to priority issues. (Patrick Ecclesine/ABC)

WASHINGTON – The Department of Veterans Affairs is looking to its employees for new ideas to combat its oldest and biggest challenges, and it will screen potential solutions in a competition similar to the ABC reality show “Shark Tank.”

The VA received 356 applications this year from its employees, all with ideas on how to work on VA Secretary David Shulkin’s five priorities: offering veterans better health care options, improving efficiency, modernizing the health care system, suicide prevention and streamlining veterans’ access to care. On June 13, 20 finalists will present their ideas in Washington, D.C., to the “sharks,” a panel of VA leaders from across the country.

Based on the presentations, the VA leaders will offer up grants for the projects. Funding for the top ideas could total $200,000 or less for each idea implemented throughout the VA.

“There are so many amazing things that happen on the ground level and in the field, so many micro-innovations that are happening and stay there as small experiments. Now we can escalate them to the entire system,” said Poonam Alaigh, the VA’s acting under secretary for health. “This is another way of bringing lots of momentum to the best ideas and solutions.”

Kerry Haynes, a chaplain at the San Antonio VA hospital, developed an idea to establish chaplain groups to help veterans struggling with moral injury – a topic that’s recently been the subject of clinical research. The VA defines moral injury as an event that “transgresses deeply held moral beliefs and expectations.”

During last year’s competition, Haynes presented his idea to VA leadership and won the resources to implement chaplain groups at other VA hospitals. It’s now considered the “gold standard” within the VA.

“It’s about moral injury veterans face as a result of combat and deployment,” Alaigh said. “Chaplain-led groups help veterans with similar issues recover from these kinds of moral injuries in safe and nonjudgmental way.”

In the two previous years of the competition, the review and judging of employees’ ideas was done internally. This year, the VA is also seeking input from veterans’ organizations. Evaluators from various groups were sent 100 proposals from VA employees and will narrow the field to 20.

The change comes after other moves by Shulkin to make known his philosophy of transparency and openness to input and criticism from outside the VA.

Joe Chenelly, executive director for the veterans organization AMVETS, is one of the veterans who was asked to review the proposals. He said he’s hoping to come across an idea for new technology that would improve communication between VA hospitals.

“Right now if you’re a veteran living in Buffalo, N.Y. and you’re in New Orleans and have medical issues and go to that VA, it’s hard for them to provide the care that veteran needs,” Chenelly said. “There needs to be something to fix those issues and streamline communication.”

In 2015, the first year that the competition was held, 263 VA employees submitted proposals. In 2016, there were 435 applications. After both competitions, 13 were deemed “gold standard” and diffused across the VA system. Alaigh said 10 projects would be chosen this year.