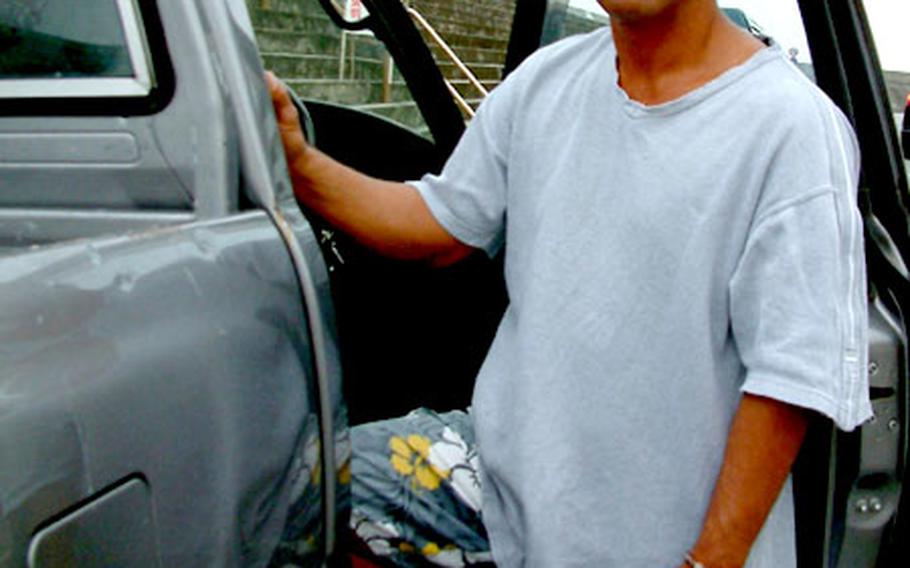 Naoto Shimabukuro, 39, a professional surfer from Yomitan, said the government is overreacting to the shark sighting. (David Allen / S&S)

Naoto Shimabukuro, 39, a professional surfer from Yomitan, said the government is overreacting to the shark sighting. (David Allen / S&S) Signs in English and Japanese warn people to be careful in a coastal area of Okinawa where a shark was sighted last month. (David Allen / S&S) 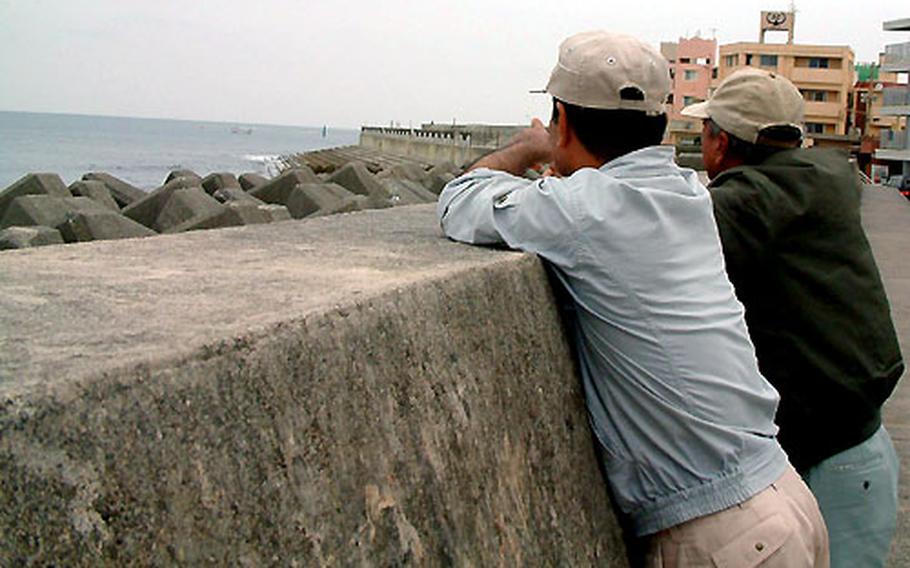 Two Okinawan fisherman check out the water conditions Monday in an area off the western coast of Okinawa where a shark sighting was reported. (David Allen / S&S)

KADENA, Okinawa &#8212; Signs in Japanese and English have been posted along the seawall in the Mizugama district of Kadena after a recent shark sighting close to shore.

The signs are in response to a windsurfer&#8217;s report that he saw two sharks near the mouth of the Hija River on Oct. 24.

Initially, all water activity in the area from the river south to the Kadena Marina was restricted, but the alert was changed to a caution after no further sightings were reported.

&#8220;If there are no further reports by the end of November, the signs will be removed,&#8221; said Masanori Chibana of Nirai Fire Station in the town of Kadena.

&#8220;Sharks are occasionally sighted in the area, especially when tide changes,&#8221; he said. &#8220;Last year, a fisherman reported sighting three sharks moving up north from Ginowan in the direction of Cape Zampa. It was not immediately known whether or not they were vicious sharks, but we cannot be too careful.&#8221;

He said these were the first shark warnings posted in the Mizugama district.

Still, the signs irked some residents. &#8220;&#8216;What a pity.&#8217; That was my first impression when I saw the signs,&#8221; said Naoto Shimabukuro, 39, a professional surfer from Yomitan who was gauging the waves along the seawall Monday morning.

He said the sighting wasn&#8217;t investigated. &#8220;Without knowing what kind of sharks they were, the signs were posted,&#8221; he said. &#8220;If Okinawa wants to be successful as the Mecca for Japan&#8217;s water sports, they should study more about the ocean and sea creatures. They should have given consideration to the impact such signs would give to the public.

Nearby, two fishermen stood along the seawall, contemplating taking their boat out later in the day.

Yoshinobu Nakamura, 60, a local fisherman who was riding his bike along the seawall path, said, &#8220;I have never seen sharks in waters around here. I&#8217;ve been fishing in these waters for nearly 50 years and I don&#8217;t believe in shark reports unless I see them with my own eyes.&#8221;

He said the shark caution would not stop him from skin-diving fishing.

An Air Force spokesman said the shark warning did not extend to water activity at the Kadena Marina, operated by the 18th Service Squadron.

Shark attacks have been rare in Okinawa waters.

In 1996, a 53-year-old fisherman from Irabu, on Miyako Island, died after being attacked by a shark while doing a coral survey for construction of a marina. Four years later Miyako officials set up a net around Sunayama Beach after a shark fatally attacked a surfer.

Miyako Island is 180 miles south of the island of Okinawa.

Senzo Uchida, director of the Churaumi Aquarium in Motobu, said if the sharks reported last month &#8220;were spotted near Hija River, there is a possibility that they were bull sharks, because one young bull shark was caught in the middle stream of the river about a couple months ago.&#8221;

Bull sharks are among the most dangerous man-eating sharks, he said, turning up where least expected and swimming in shallow water.

&#8220;If the sharks sighted in waters near Kadena were bull sharks, they are very dangerous.&#8221;

Another sort of shark could be relatively harmless, he added. &#8220;It all depends on the type of the shark. However, because the area where they were spotted was near Hija River, I would say that it is better to be careful.&#8221;