Mr. Herd with the Ladies for Liberty, who traveled with him on the trip and entertained the veterans in the airports, on the planes and on the bus ride. They are posing with him as an Air Force band plays military tunes and other tunes from the 40s. (Photo courtesy of Stacie Shain)

Mr. Herd with the Ladies for Liberty, who traveled with him on the trip and entertained the veterans in the airports, on the planes and on the bus ride. They are posing with him as an Air Force band plays military tunes and other tunes from the 40s. (Photo courtesy of Stacie Shain) Charles Herd at his home, holding a photograph of himself when he first joined the Army. (Photo courtesy of Stacie Shain) Mr. Herd and his guardian for the trip, Erin Austin, arriving at BWI and being greeted by active duty service personnel. Austin is a student at Bellarmine Uinversity and was helping tweet for Mr. Herd. (Photo courtesy of Stacie Shain) 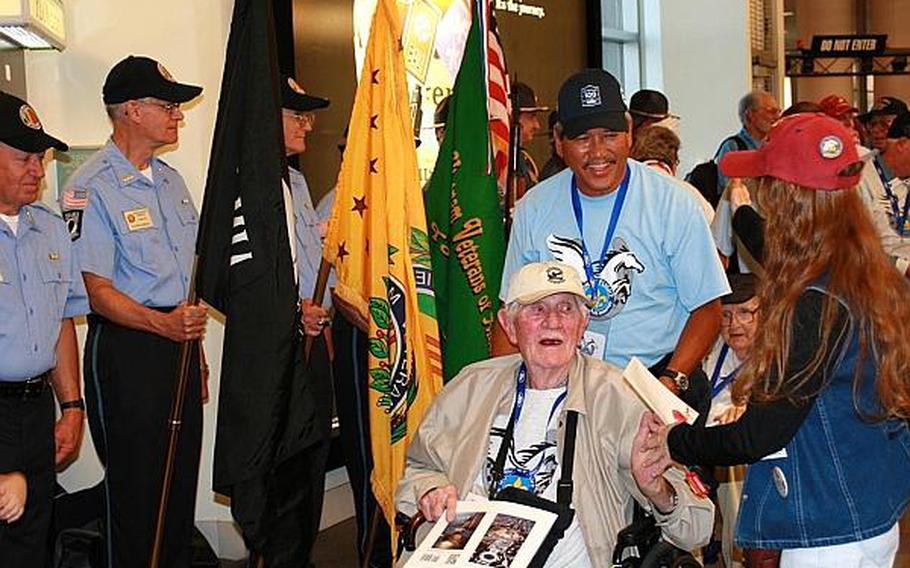 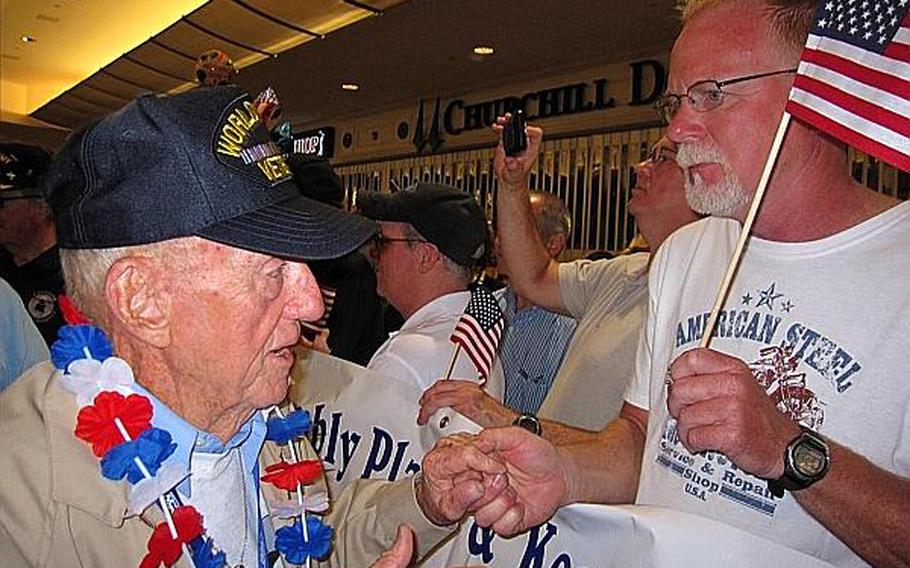 The "welcome home" celebration at the Louisville International Airport. The veterans were greeted by hundreds of people when they returned from their trip. Mr. Miller is being greeted and thanked by a well-wisher. (Photo courtesy of Stacie Shain) Mr. Miller was a veteran of both the Normandy and St. Lo campaigns. Here is he reflecting on both of them. He and his twin brother, Tom, quit high school and joined the Army together. They were both in the same battalion but different companies. At St. Lo, they slept in the hedges. Somehow, Tom lost his dogtags there, and in 2010, they were found by a German citizen, who returned them to Hal Miller (Tom had died in 1974). (Photo courtesy of Stacie Shain) 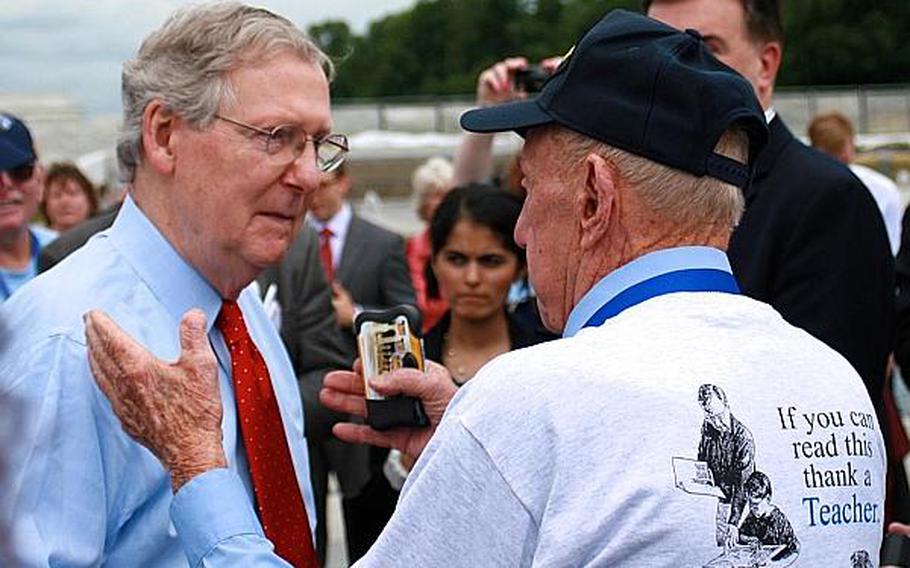 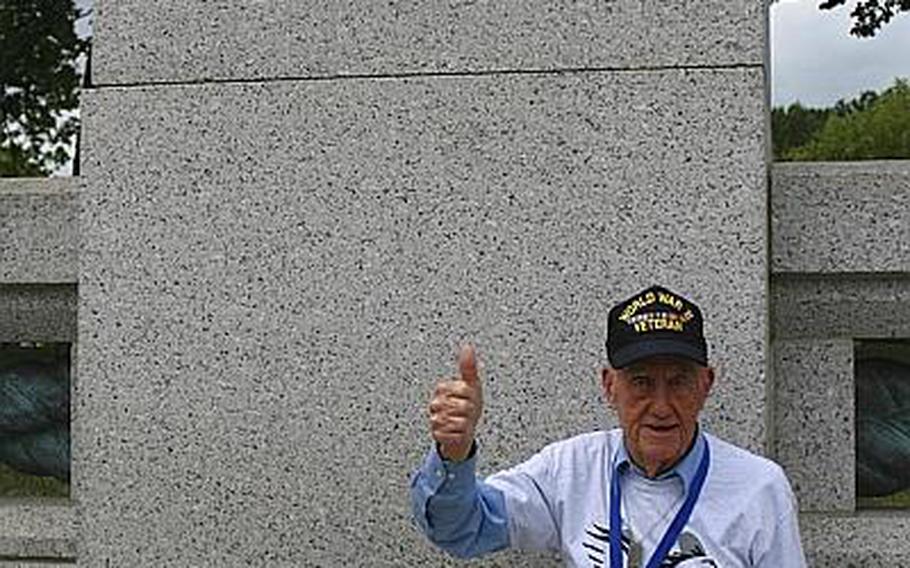 Hal Miller is posing by the Kentucky pillar at the National World War II Memorial. (Photo courtesy of Stacie Shain)

WASHINGTON — For years, Hal Miller wouldn’t talk about landing on Utah Beach and the D-Day invasion. How, with his twin by his side in Normandy on June 6, 1944, he witnessed history.

But now — thanks to the social networking platform Twitter — his story is being shared to remind younger generations of the sacrifices and horrors of World War II.

Miller’s story — and that of his twin brother, Tom — is being shared by Stacie Shain, a public relations volunteer with the Honor Flight Bluegrass Chapter out of Kentucky. Shain had been thinking of ways to connect teens and young adults with World War II veterans. She asked Miller and another WWII veteran, Charles Herd, if she could tweet in real-time during their honor flight to Washington, D.C., in June.

“I thought this was a great way to reach out to a younger audience,” Shain said. The men went along with the idea, “telling us what to tweet.”

The Twitter accounts, @WW2VetCharles and @WW2VetHal, each have several hundred followers. Shain decided to not only share their honor flight, but their battle stories as well.

Shain says it’s important to share WWII veterans’ stories as their numbers diminish. The National Museum of WWII Veterans estimates that there are just over 1 million of them still living.

“It’s good for the young people to recognize older people and to recognize that our country is the greatest country,” Herd, 91, said in an interview with Stars and Stripes. Herd said he was glad to offer a glimpse of history, even if he was a little unsure what Twitter was.

As he explored the World War II Memorial in Washington, the Louisville resident tweeted, “You can’t waste any day, kiddo. There are no reruns. When you’re gone you’re gone.”

Herd enrolled at the University of Tennessee and joined the ROTC program there. He was called to active duty and was sent to basic training at Fort Benning. He joined the 84th Infantry Division and was shipped overseas to Europe. He was later injured, spent months in rehab, then went back to active duty.

Hal and Tom Miller joined the Army after quitting high school in 1943. Hal Miller said an Army recruiter told them that if they waited until they graduated, the twins would be separated. The Millers would stay together for the course of World War II, becoming part of the 297th Combat Engineers.

“My brother and I didn’t talk about (the war). It was like it never happened,” Hal Miller said. Then came a 10-year reunion with their Army brothers. “After that, we couldn’t shut up about it,” he said. His brother died in 1974. As for sharing their message on Twitter, Miller was pleased, “It got the word out. I hope we never have to go through that again. The more they (the younger generations) are around it, the better all the way around.”

For the June 6 honor flight, Shain spent hours with Miller and Herd, taking notes about their service and their lives after the war. “We had hoped people would care, and these stories are so important.”

She said the live tweeting by her and a student helper was just an experiment. “We weren’t sure if anyone would follow us, but it’s remarkable how many [we gained] in one day,” Shain said.

Throughout the day in Washington, they tweeted on behalf of Miller as he shared his story with them: “I landed on June 7, and my job was to clear the roads. Collected bodies for burial. I can’t talk about w/o getting emotional,” “On the bus headed to the Memorial. Getting an escort by the US Park Police. We get to run red lights!”

The honor flight, greeted by the Air Force Band when they landed, toured the Korean and the WWII Memorials.

Mixed in with the horror stories of the war — Shain said Miller teared up over friends he lost at Utah Beach — were good memories too.

He told how he was about to get a shore leave with his twin brother to celebrate their 21st birthday.