Sharing the tradition: Quilt to remind folks in Kitzingen of troops 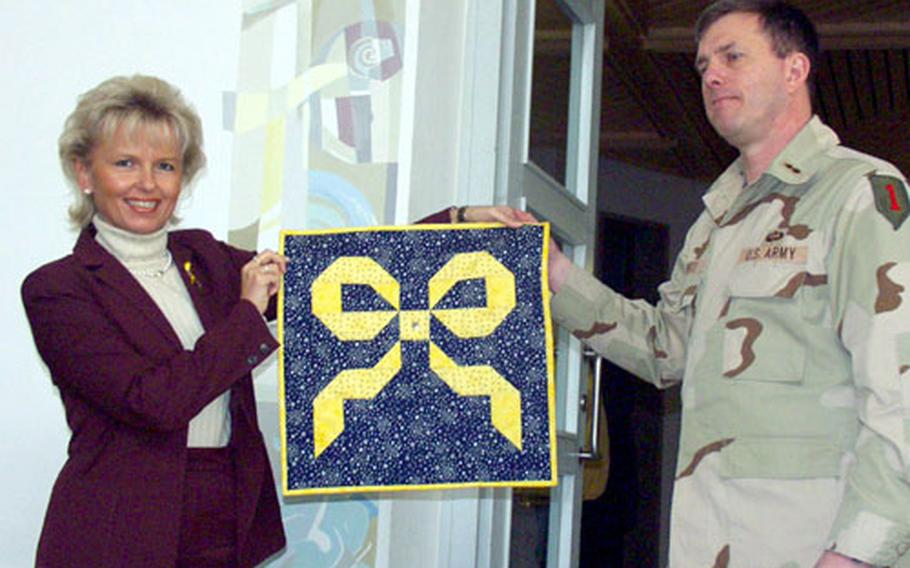 Col. Paul Wentz, commander of the 1st Infantry Division’s Division Support Company, presents a yellow ribbon quilt to Tamara Bischof, the Landratsamt (commissioner) of Kitzingen county in Germany. Bischof said the quilt will hang in the foyer of Kitzingen’s county administration building until all 2,100 Kitzingen-based U.S. Army troops return home safely from Iraq in the spring of 2005. (Steve Liewer / S&S)

KITZINGEN, Germany &#8212; If you see a pretty blue quilt adorned with a yellow ribbon on Eliane Wentz&#8217;s porch, you&#8217;ll know her husband, Col. Paul Wentz, is serving his country somewhere far away.

With Paul Wentz &#8212; commander of the 1st Infantry Division&#8217;s Kitzingen-based Division Support Command &#8212; headed off next week on his longest deployment yet, the couple decided to share the American tradition of yellow ribbons with their German friends.

On Tuesday, they presented a yellow-ribbon quilt just like one on the Wentzes&#8217; porch to Tamara Bischof, the chief commissioner of Kitzingen county. She plans to hang it in the foyer of the county commission building, along with a plaque explaining the tradition, until Wentz and his troops come home.

About 50,000 people live in the rural county of farms and vineyards 100 miles southeast of Frankfurt. About 15 percent of them are Americans tied to Kitzingen&#8217;s two U.S. Army bases, Larson Barracks and Harvey Barracks. Among the 12,000 1st ID troops headed to Iraq, Paul Wentz said, about 2,100 are from Kitzingen.

Bischof and the county&#8217;s lord mayor, Bernd Moser, presented gifts of their own to the Wentzes: a CD of European music, a picture book of the county, a Kitzingen pitcher and two limited-edition bottles of local wine.

&#8220;The city and county administration, as well as the German citizens, will do everything to show our understanding, support and solidarity so that you and all the American families can continue feeling safe and at home in our region,&#8221; she said.

Americans and Germans have lived happily together in Kitzingen since the end of World War II, when the town was the home of a repatriation camp for tens of thousands of German soldiers.

Germans are especially keen to publicly show their support for U.S. troops now, even as the Defense Department considers a plan it is feared may close many American military bases in Western Europe. Nothing has been announced, but 1st ID bases are widely rumored to be slated for closure.

Bischof said she has met with county commissioners and mayors from W&#252;rzburg, Schweinfurt, Giebelstadt and other cities that would be profoundly affected if the bases were closed. They have prepared a packet of information about the infrastructure and support given to U.S. bases in the region, and they plan to make a presentation next week to the Bavarian parliament in Munich.

On a more personal level, the city and county governments are encouraging Kitzingen residents to join them in displaying yellow ribbons until the soldiers come home.