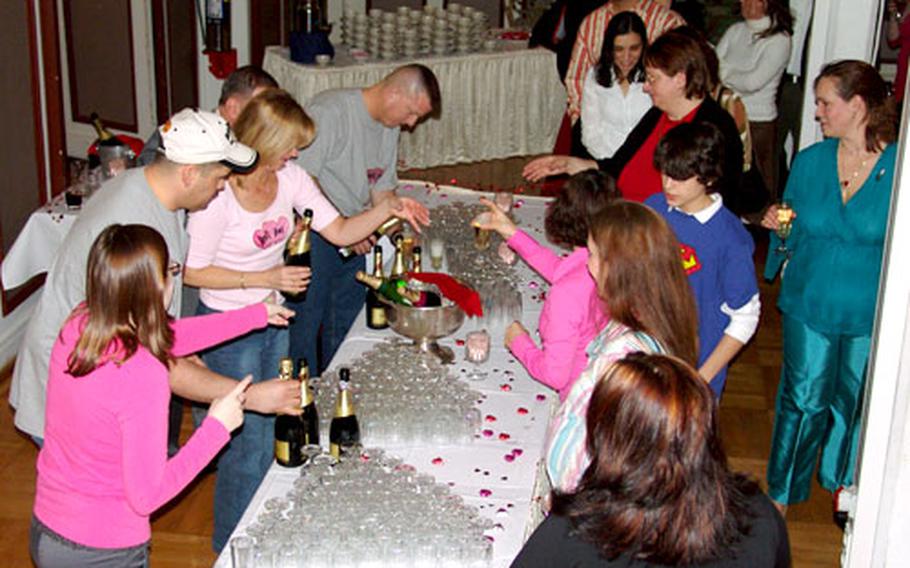 A line forms at the champagne table as Baumholder, Germany, officers and spouses celebrate Valentine’s Day with a party. About 170 people packed into the ballroom of the Rhinelander, the base club. (LeAnne MacAllister / Courtesy of U.S. Army)

BAUMHOLDER, Germany &#8212; Soldiers, despite their legendary toughness, can be devastatingly romantic. So romantic they may catch off guard Army spouses, legendary for being stoically tough during deployments.

If the Baumholder military community knows how to do anything, it&#8217;s get together for special events, and Tuesday night&#8217;s &#8220;Bringing Hearts Together&#8221; St. Valentine&#8217;s Day party was no exception. A crowd of about 170 packed into the ballroom of the Rhinelander, the base club. XOXOs from soldiers and officers to wives and husbands was but one highlight.

To some extent, it was about sharing the heartache.

Everyone told her she was going to hate Baumholder, but it&#8217;s turned out to be a close-knit community, said Guin, who&#8217;s husband, Sgt. John Guin, is with 2nd Battalion, 6th Infantry Regiment.

Next event to look forward to? Fasching (the German version of Mardi Gras)! said Guin and Mullins.