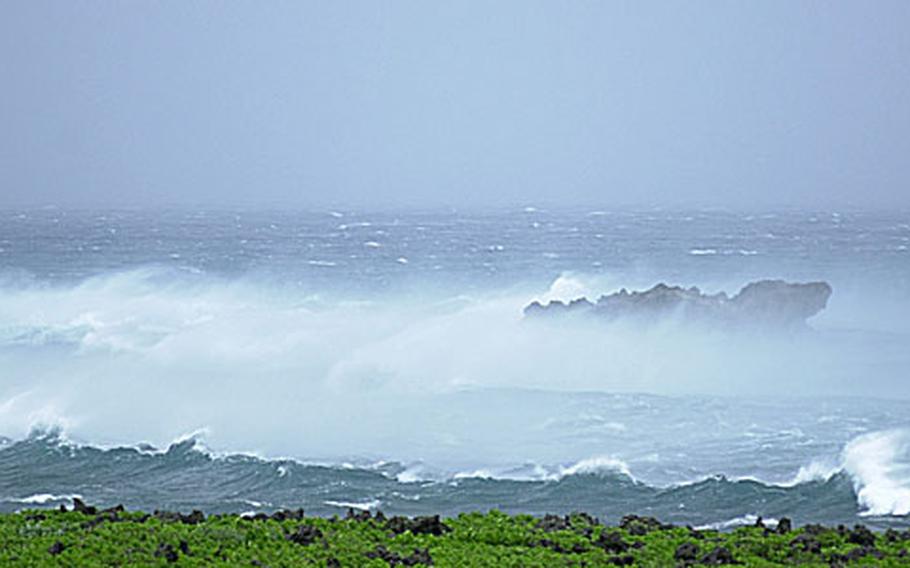 At 5 p.m. Saturday, the surf pounds into the shoreline at Zanpa Point, Okinawa. All military installations were at Tropical Cyclone Condition of Readiness 1 Emergency at 5:25 p.m. Saturday with Typhoon Shanshan taking aim at Okinawa. (Cindy Fisher / S&S)

Ishigaki Island to Okinawa&#8217;s southwest suffered Shanshan&#8217;s worst &#8212; 138 mph sustained winds and 161 mph gusts as Shanshan&#8217;s eye passed directly over the island at mid-day Saturday, knocking out power to thousands, injuring more than a dozen people and capsizing vessels. Kyodo News reported that two people were killed in a landslide triggered by heavy rain on Kyushu. There were no immediate reports of damage, death or injury on Okinawa, which entered Tropical Cyclone Condition of Readiness 1-E (emergency) at 5:25 p.m. Saturday. More than 100 flights were canceled into and out of Naha International Airport, stranding thousands of passengers.

Though Shanshan began moving away from Okinawa, its southern quadrant stubbornly hung close enough to the island to keep U.S. bases under TCCOR 1-E lockdown until 4:30 a.m. Sunday, when TCCOR 1-R (recovery) was finally declared.

As Shanshan was approaching, Kadena moved its &#8220;heavy&#8221; assets, KC-135 Stratotankers and Airborne Warning and Control Systems aircraft, to safe haven bases elsewhere in the Pacific, said 18th Wing spokesman Jonathan Monroe. He would not disclose where the aircraft were sent.

Shanshan&#8217;s eye passed over Ishigaki at 11:15 a.m. Saturday. By mid-afternoon, 19 people were reported injured, mostly from catching fingers in doorways, being knocked down by strong winds or by broken glass, according to Okinawa&#8217;s prefectural disaster management office.

At Ishigaki port, eight vessels capsized. A highway on Ishigaki was closed after 10 utility poles fell on the road, and 25,340 families on the island remained without electrical power.

At midnight Saturday, Shanshan swirled 127 miles west-northwest of Okinawa, rumbling northeast at 18 mph, packing sustained 138 mph winds and 167 mph gusts at its center &#8212; equal to a Category 5 hurricane on the Saffir-Simpson scale.

Joint Typhoon Warning Center forecasts call for Shanshan to pick up forward speed and make a beeline northeast toward Kyushu &#8212; and Sasebo, which was was bracing for an 8 p.m. Sunday arrival 6 miles to its west, along with 109 mph sustained winds and 132 mph gusts, equal to a Category 3 hurricane.

Sasebo officials declared TCCOR 2 at noon Saturday, with TCCOR 1 to follow at midnight. Base spokesman Chuck Howard said Sasebo was preparing for wind gusts of between 75 and 81 mph. Navy exchange and commissary services were to be closed Sunday, along with shuttle bus service for air passengers transiting Fukuoka International Airport, Howard said.

Only one vessel, the Whidbey Island-class dock landing ship USS Tortuga, remained in port under repair, Howard said. All others were either underway on deployment or had been moved out of port to safety, he said.

Shanshan didn&#8217;t appear to be as much a threat to Iwakuni Marine Corps Air Station farther to the north and east. Base spokeswoman Master Sgt. Lesli Coakley said the base would declare an upgrade to TCCOR 2 at 3 a.m. Sunday. Though the base wasn&#8217;t expecting a direct hit, Coakley said, weather officials were forecasting &#8220;a lot of rain&#8221; for Iwakuni.

The JTWC forecasts Shanshan to pass 72 miles north and west of Iwakuni at 2 a.m. Monday, with sustained winds of 98 mph and 121 mph gusts.

The Associated Press and Stripes reporter Chiyomi Sumida contributed to this report.