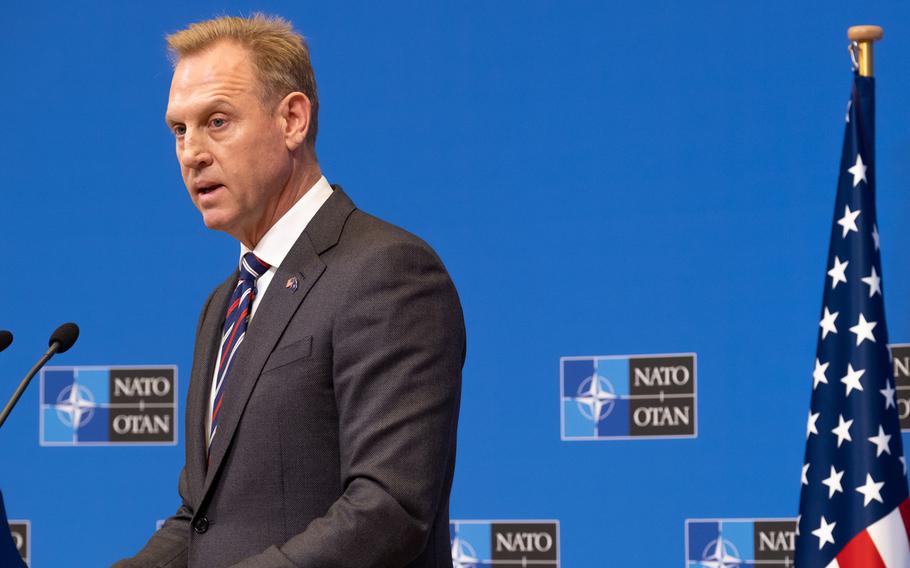 Acting Defense Secretary Pat Shanahan in a news conference on Feb. 14, 2019. On Friday, in Munich, Shanahan said he wants coalition members to expand support in fight against the Islamic State. (NATO)

MUNICH— Acting Defense Secretary Pat Shanahan said Friday he wants coalition members in the fight against the Islamic State group to step up their support even as the U.S. prepares to pull out of northern Syria.

“While the time for U.S. troops on the ground in northeast Syria winds down, the U.S. remains committed to our coalition’s cause—the permanent defeat of ISIS,” Shanahan said at the start of the Munich Security Conference. “I, for one, envision an even bigger and stronger coalition going forward.”

In Munich, scores of world leaders have assembled for three days of discussions on a range of threats to the international order. The theme of this year’s conference —“Who will pick up the pieces?”—highlights concerns that long-standing institutions like NATO are struggling to stay united.

“The whole liberal world order appears to be falling apart — nothing is as it once was,” said the conference’s chairman, Wolfgang Ischinger, on the eve of the Munich talks.

Much of the focus is expected to revolve around the U.S. and its commitments to alliances it has long championed—namely NATO.

“He will not accept the status quo just because everyone else has,” Graham said. “I think that is a good thing as long as you get the right outcomes.”

Graham said increased defense spending in Europe is an indication of progress.

Shanahan, in his first tour through Europe as defense chief, has sought to assure partners that the U.S. remains committed to its alliances, including NATO.

Meanwhile, in the Middle East, the U.S.-led coalition that has battled ISIS over the last several years in Syria and Iraq has largely defeated the group, Shanahan said.

But Trump’s abrupt announcement in December that he planned to pull forces from Syria took partners by surprise. Shanahan defended the looming drawdown but added that it wasn’t a sign that Washington was leaving the overall fight.

“The United States remains steadfast in its support for the coalition,” said Shanahan, who was flanked by German Defense Minister Ursula von der Leyen. “We will maintain our counterterrorism capabilities in the region and we will continue to support our local partners.”

While it isn’t clear going forward how the U.S. coalition will morph or how allies might contribute more, Shanahan said ISIS remains a threat even though it has lost 99 percent of the territory it once held in Syria and Iraq.

Graham trumpeted success against ISIS while calling for continued vigilance.

“The Islamic state in Syria and Iraq is dead,” Graham said. “It has been destroyed.”

But a premature departure in Syria could result in ISIS regenerating and raises the risk that Turkey will move in and possibly target U.S.-backed Kurdish fighters, Graham warned.

Graham said he has urged Trump not to conduct a hasty pullout, which he said would be like President Barack Obama’s decision to depart Iraq. Critics of the former administration say the U.S. withdrawal paved the way for the emergence of ISIS.

“If you are leaving Syria, why would it be any better for you,” Graham said, alluding to Trump.

Going forward, Shanahan said the coalition also will need to track threats posed by ISIS offshoots that have sprung up in Somalia, western Africa, the Philippines and Afghanistan.

“There is no one-size-fits-all approach to permanently defeating ISIS across the globe,” Shanahan said.

In Munich, Vice President Mike Pence is leading the U.S. delegation and is slated to address the conference on Saturday. German Chancellor Angela Merkel also is scheduled to speak.