Shadow Platoon still mourns soldier who 'defined who we were' 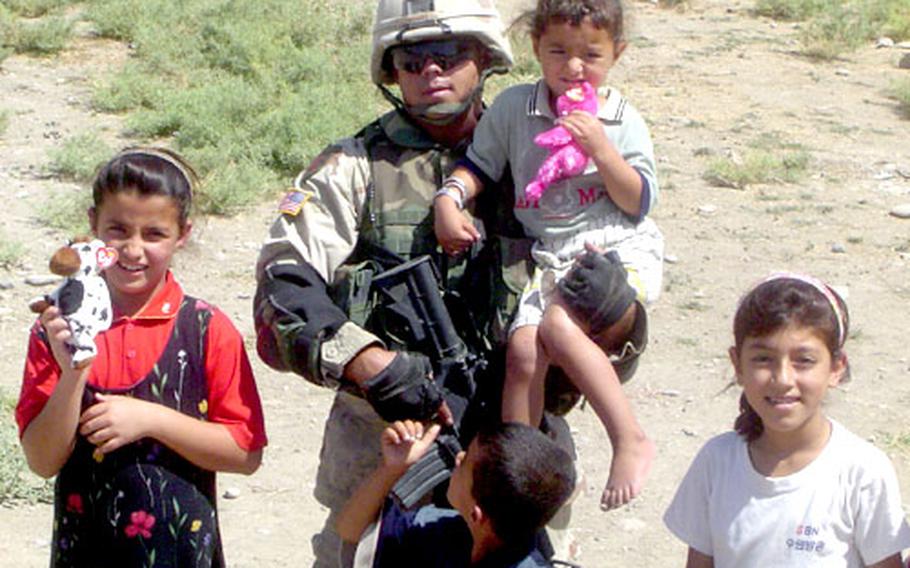 Spc. Joshua Henry was a tattooed bodybuilder who razzed his buddies to no end. But he had a soft spot for children, who were drawn to him like a magnet. He planned to be a kindergarten teacher after leaving the Army. He was killed in an ambush Sept. 20. (Photo courtesy of U.S. Army)

Spc. Joshua Henry was a tattooed bodybuilder who razzed his buddies to no end. But he had a soft spot for children, who were drawn to him like a magnet. He planned to be a kindergarten teacher after leaving the Army. He was killed in an ambush Sept. 20. (Photo courtesy of U.S. Army) 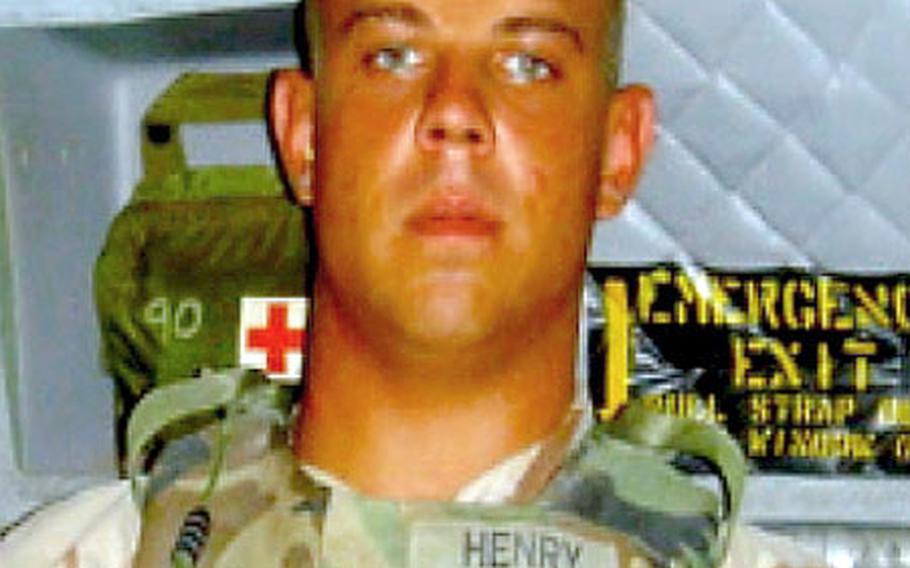 Friends called Spc. Joshua Henry the "heart and soul" of Shadow Platoon, the scouts of Task Force 1-7. He earned a Bronze Star with Valor when he kept firing his rifle at enemy troops, even though he&#39;d been hit in the side and in the legs by small-arms fire during an ambush on his convoy Sept. 20. He died of his wounds hours later. (Photo courtesy of U.S. Army) 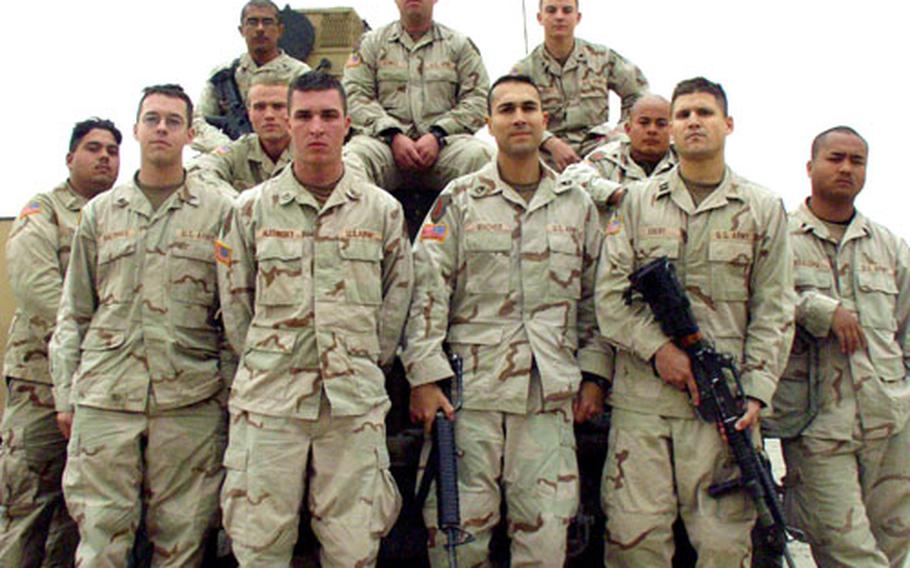 FORWARD OPERATING BASE SUMMERALL, Iraq &#8212; Sgt. Collin MacInnes carefully crosses off each day of his long, bitter Iraq adventure on the calendar.

All except Sept. 20. That was the day Shadow Platoon lost its heart and soul.

His name was Spc. Joshua Henry, a gregarious 21-year-old from Avonmore, Pa. A muscle-bound gym rat, he had starred on his undefeated high school football team. A trained sniper, he could shoot better than almost anyone in Battery A of the 1st Battalion, 7th Field Artillery. He never missed a chance to joke or wisecrack with his buddies.

Henry attracted children like a magnet. Iraqi youngsters swarmed around him, and he could play with them for hours. In the towns where Shadow Platoon patrolled, kids who didn&#8217;t speak English would run up to the soldiers shouting, &#8220;Henry! Henry!&#8221; searching every face for their playmate.

After the Army, the tattooed sharpshooter planned to become a kindergarten teacher.

The day began like any other, with Shadow Platoon rising early to escort the battery&#8217;s executive officer to Ash Sharqat for a city council meeting.

Ash Sharqat lies at the edge of Salah ad Din province, 200 miles north of Baghdad. Although it is dominated by Sunni Muslims and is in Saddam Hussein&#8217;s home province, it suffered from neglect under his regime because nearly all of its residents belong to a different tribe from the deposed dictator. The insurgency hadn&#8217;t taken hold there.

The convoy included six Humvees. The 40-mile drive from Summerall to Ash Sharqat took more than an hour. The soldiers stood guard until the meeting ended at 12:30 p.m.

Oddly, few people milled about in the usually crowded streets after the meeting &#8212; often a sign of trouble, because insurgents will frequently put out word when they are planning to attack.

A few minutes down the road, in the village of Huni, the soldiers heard gunfire. The convoy stopped, soldiers dismounted, ready to shoot.

Within seconds, the whole platoon manned its guns and returned fire. Luckily the rebels&#8217; first fusillade had missed.

Each Humvee crew picked different targets with their rifles and mounted machine guns.

They did. In the fifth Humvee, for example, MacInnes, Harney and Spc. Timothy Schrack destroyed first a six-man enemy squad, then a two-man machine gun nest. Then they engaged fighters shooting grenades from behind a concrete wall.

Ebert, in the second vehicle, stood next to Henry, his driver, firing their weapons over the top of the Humvee. But some of the enemy had maneuvered behind them.

Suddenly a shot knocked Ebert to the ground. He looked and saw that Henry, too had been hit in the side, a bullet passing clear through him where his armored vest was weakest.

But the rifle fire kept coming. Two more bullets hit Henry in the legs, finally knocking him down. Ebert screamed for a medic, and Sgt. 1st Class Erick Macher, 30, of Sacramento, Calif., pulled his Humvee up next to Henry and loaded him aboard.

The convoy raced off to Tinderbox, a nearby firebase with a tiny aid station. A civilian physician&#8217;s assistant and a Task Force 1-7 medic, Spc. Luis Song, 22, of Miami, did all they could to keep Henry alive.

The first bullet collapsed his lung, ruptured his spleen and hit his spine.

&#8220;They stuck a needle in [his chest] to try and help him breathe,&#8221; said Pfc. Kyle Hledinsky, 21, of Elwood City, Pa., who held a pressure dressing on the side wound while Pvt. Shannon Squires, 24, of Virginia Beach, Va., did the same to the badly bleeding leg wound.

A medevac helicopter from Tikrit got there an hour later and took him to the 67th Combat Support Hospital in Tikrit. The platoon started on the long drive back to Summerall without Macher and Henry.

Meanwhile, medics gave Henry artificial respiration, who was still somewhat alert, Macher said. &#8220;I tried to get closer to him, but the medics kept pushing me away.&#8221;

At the hospital, he waited anxiously outside the emergency room. Doctors and nurses kept giving him conflicting reports on his friend&#8217;s condition. Once they came outside, looking for blood donors, but Macher&#8217;s was the wrong type.

Two hours after they arrived, a doctor came out with the bad news. Henry had lost too much blood. He didn&#8217;t make it.

Henry posthumously earned a Bronze Star with Valor, as well as a Purple Heart and an Army Commendation Medal. Eight other men, including Schrack and Harney, have been nominated for valor awards.

Ebert wrestles with his conscience. Henry had been assigned to a platoon operating the 1-7 Field Artillery&#8217;s howitzers, a job that kept him at Summerall all the time. He begged Ebert for months to rejoin Shadow Platoon so he could patrol with his buddies. Ebert had relented and moved him just two weeks before the fatal mission.

Hledinsky, home in October on his midtour leave, visited Henry&#8217;s parents, Larry and Perri, and three of his six brothers and sisters at their home in Pennsylvania.

MacInnes left Sept. 20 unmarked on his calendar. Back in California, he had once played in a heavy metal band. Now he got out the acoustic guitar and penned a quieter song that expressed his sadness over his lost buddy. He called it &#8220;A Better Place.&#8221;