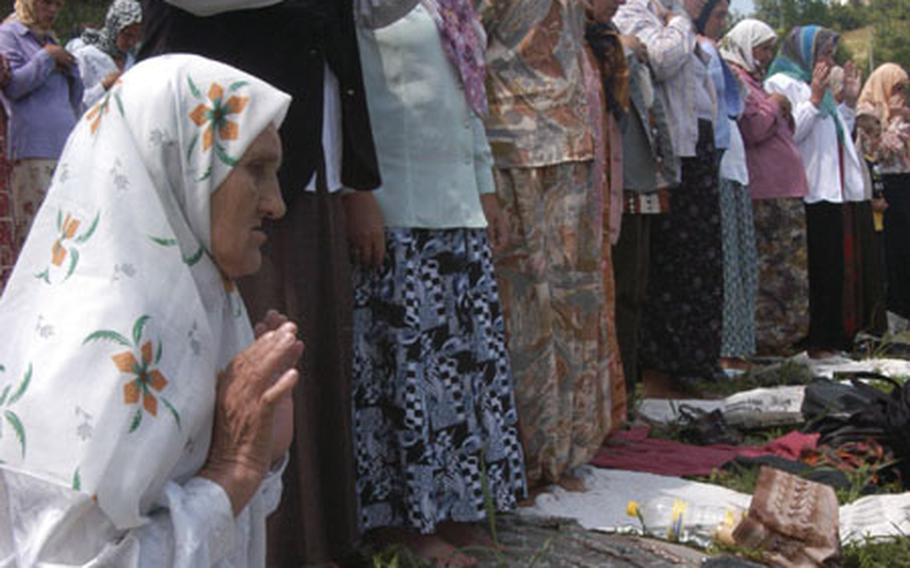 Sida Mehanovic, too weak to stand, prays over a picture of her missing family members at the eighth Srebrenica memorial ceremony at the nearby town of Potocari on Friday. Most of the 7,500 to 10,000 men killed after the fall of Srebrenica on July 11, 1995, were Muslim. A memorial is being built at the sight. (Ivana Avramovic / S&S)

Sida Mehanovic, too weak to stand, prays over a picture of her missing family members at the eighth Srebrenica memorial ceremony at the nearby town of Potocari on Friday. Most of the 7,500 to 10,000 men killed after the fall of Srebrenica on July 11, 1995, were Muslim. A memorial is being built at the sight. (Ivana Avramovic / S&S) 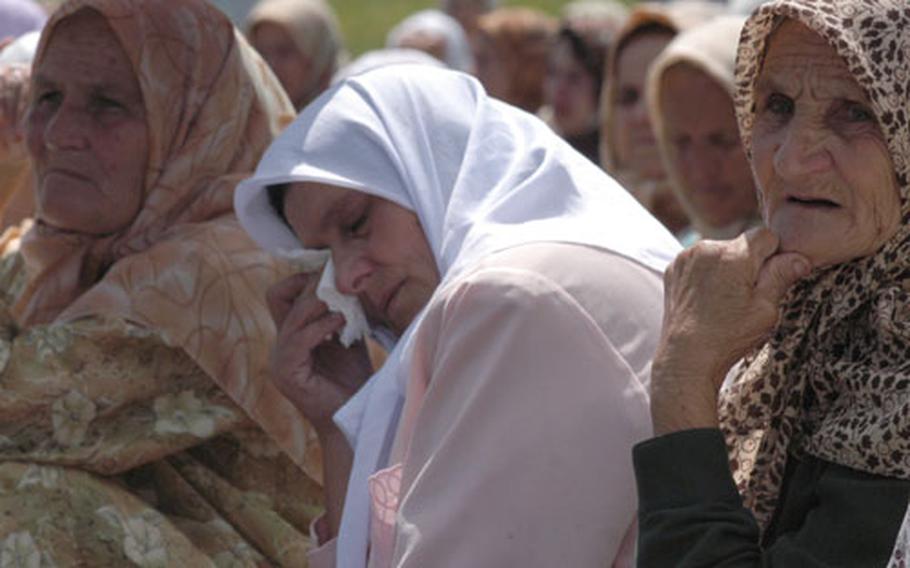 At the commemoration ceremony Friday, a second group of identified victims exhumed from mass graves, 282 Muslim boys and men, were buried according to the Muslim tradition. (Ivana Avramovic / S&S)

EAGLE BASE, Bosnia and Herzegovina &#8212; About 15,000 people gathered Friday to mark the eighth year since horrific events in a once-U.N.-protected safe haven and bury the second group of identified victims of the Srebrenica massacre.

Though the Stabilization Force expected the annual event in the nearby town of Potocari to go peacefully, two companies of American Task Force South troops kept a low profile around the memorial, present to reinforce the local police, if needed. A unit of Italian carabinieri joined them.

The Women of Srebrenica organization had requested less police presence, and so it was this time, said Maj. John Barton, executive officer of Task Force South.

The troops were aware of the task lying ahead of them even during training at Fort Riley, Kan., before coming to Bosnia in March, Barton said. They spent more than a month working on the security plan with local police and the international community.

More than 7,500 Bosnian Muslim boys and men were killed after the town fell into the hands of Bosnian Serbian forces July 11, 1995.

For the first time, officials from Republika Srpska, the Serbian-run part of the country created after the war that Srebrenica is now a part of, joined the mourners.

Many cried during the prayer, and even more when the burial began. But many wandered around, tearless, looking for names.

Sida Mehanovic, her hands trembling, prayed over a collection of photos of her and missing family members: her husband, sons, grandson, son-in-law and nephew.

None of them has been identified yet, but like thousands of others, she comes to the site every year.

After years of lobbying by the Women of Srebrenica for a proper memorial site, it is finally coming to pass.

The section designated for the memorial site and the cemetery has been fenced in, walkways built, and a fixed-roof awning for prayer erected.

Visitors now can use faucets and fountains to wash their faces, hands and feet before prayer according to the Muslim tradition. As recently as March, they had to rely on water bottles they brought with them and water cisterns provided for the occasion.

The first 600 identified victims whose bodies were exhumed from mass graves were buried in Potocari in March. Their names were read as the bodies of another 282 victims were laid to rest.

Although security forces were fewer in number this year, the need to ensure safety is still in the forefront of SFOR&#8217;s concerns.