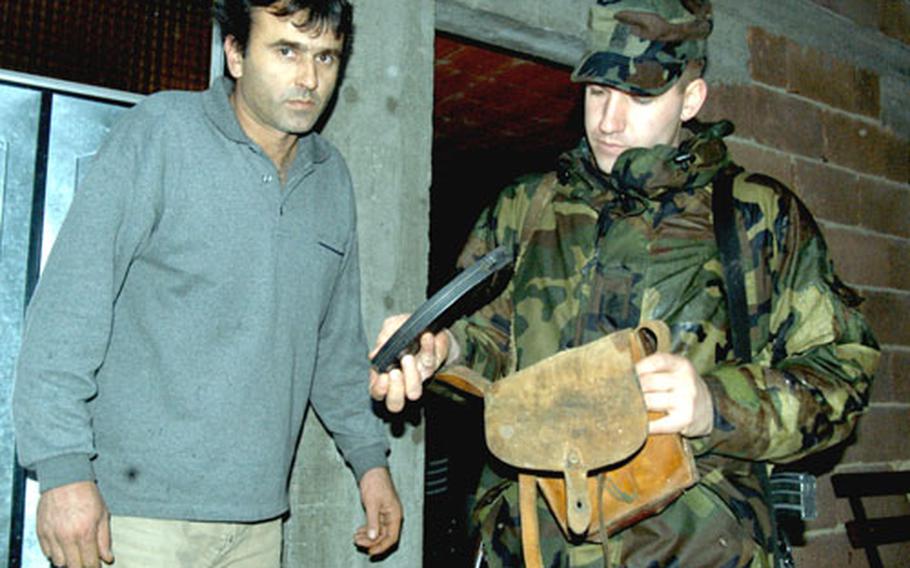 KOZLUK, Bosnia and Herzegovina &#8212; Neither rain, nor snow, nor heat, nor gloom stays these Minnesota National Guard soldiers from their appointed rounds.

OK, they&#8217;re not the U.S. Postal Service, but these troops are still out every day patrolling the roads, towns and villages around Forward Operating Base Connor in northeastern Bosnia.

Last week, Staff Sgt. Louis Deitchler of Company C, 2nd Battalion, 136th Infantry Regiment and his soldiers were following up on celebratory gunfire they saw on a hilltop in the early morning hours. The residents in the area were celebrating Orthodox Christian New Year.

During a six-hour patrol, the troops drove through villages and walked house- to-house through a steady rain to see if people heard the gunfire.

The most common response was no.

The soldiers were not directly investigating the gunfire incidents. They merely wanted to see what, if anything, the local police had done about them because U.S. troops are trying to shift responsibilities to the local authorities, Deitchler said.

In the past, if local residents came upon a mine or an unexploded ordnance, SFOR&#8217;s explosive ordnance teams would collect it. Now, SFOR calls on the local police to do the job, Deitchler said.

Over the past several months, the number of troops at Connor has been reduced as part of the restructuring of U.S. peacekeepers in Bosnia.

On this day, the Guardsmen knocked on doors in a village north of Zvornik. The celebratory gunfire helped soldiers pinpoint areas where people are still holding illegal weapons, Deitchler said.

After a few houses, the troops found one family that wanted to get rid of its weapons.

Tracking down illegal weapons isn&#8217;t the troops&#8217; only duty. On other patrols, soldiers check on how people are doing and if they need anything. They give advice where the locals can get help, whether they need medical attention or blankets.

And they make at least one run each week to donate school supplies, clothing and food sent from home.

Their efforts are paying off, Deitchler said. There was nothing but ruins along the road leading to Connor before the camp opened about three years ago. Rebuilt homes decorate the area now.