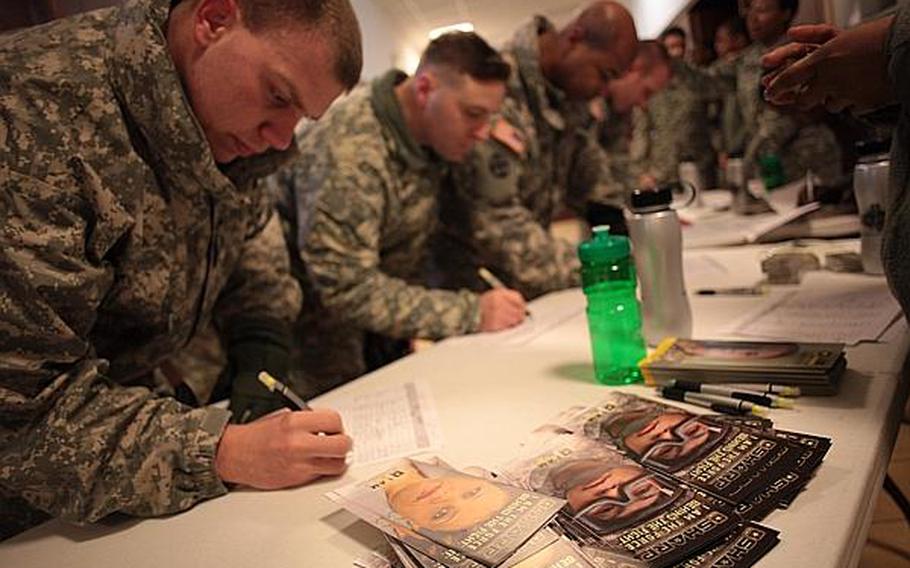 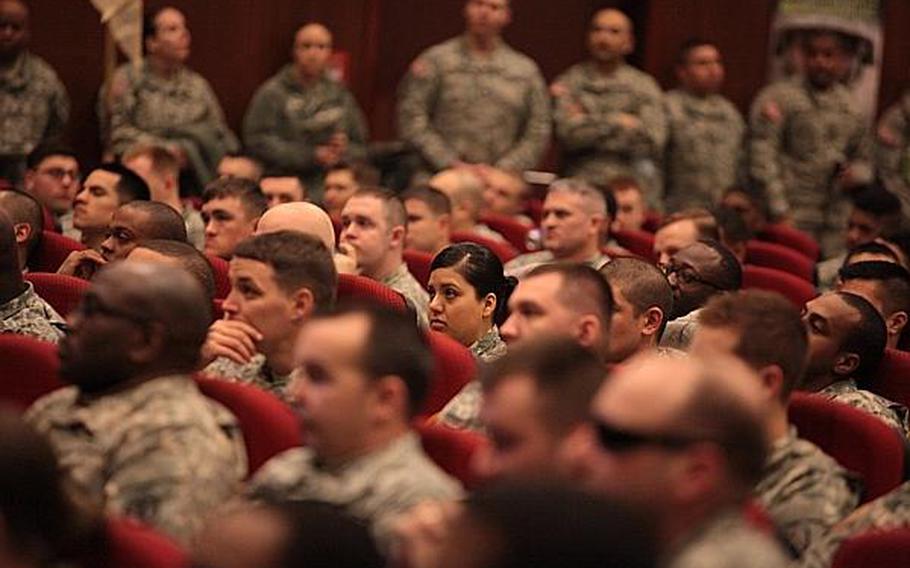 Soldiers across U.S. Army Europe, such as these at Baumholder, took an operational stand-down day Wednesday to learn about the Army's Sexual Harassment/Assault Response and Prevention program. The aim of the training was to prevent sex crimes, and ensure personnel know what help is available to victims and how to get it. (Matt Millham/Stars and Stripes)

During a skit, a female soldier enacts a sexual assault on another soldier as he conducts push-ups in a mock physical fitness test during sexual harassment and assault response and prevention training at Baumholder. (Matt Millham/Stars and Stripes) 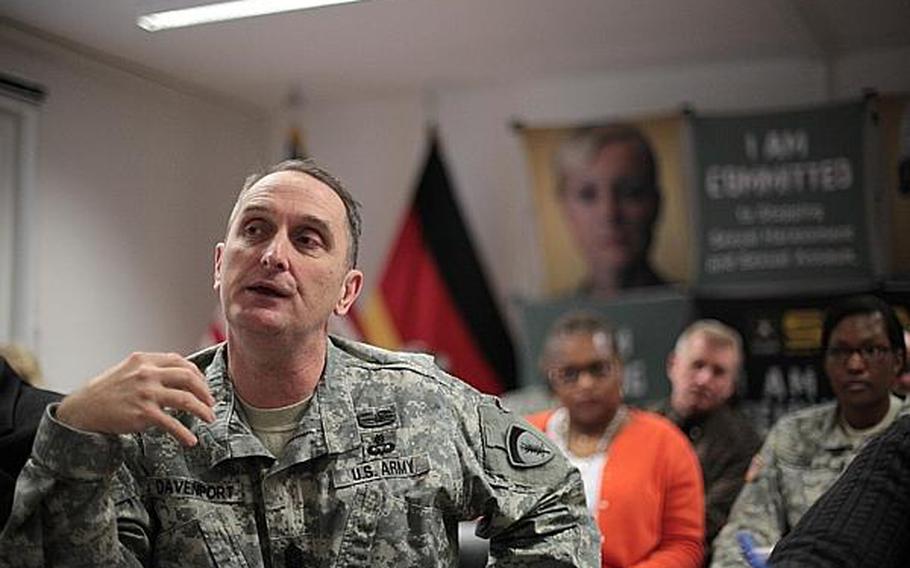 U.S. Army Europe Command Sgt. Maj. David Davenport addresses NATO Brigade soldiers during training on the Army's Sexual Harassment/Assault Response and Prevention program. Soldiers across the command stood down Wednesday to explore the topic, with the aim of preventing sex crimes and ensuring personnel know what help is available to victims. (Matt Millham/Stars and Stripes)

KAISERSLAUTERN, Germany — The skit played out like this: A young male soldier was pounding out pushups with ease, while a female soldier keeping count made a point of letting him know she noticed.

“Hot in here,” she said, before going on to grope the soldier’s back and chest.

It was inappropriate, and the audience of more than 400 soldiers at Baumholder’s Wagon Wheel Theater knew it. They disagreed, though, on just how bad it was. Some called it sexual harassment. Others sexual assault.

But the top enlisted soldier in U.S. Army Europe set the record straight.

That’s a big part of why Army personnel across Europe halted normal operations Wednesday to take a hard look at the Army’s handling of sex crimes and provide information on resources available for victims.

The military has come under increasing scrutiny over its handling of sexual assault in the wake of a series of high-profile cases.

Davenport visited various bases to watch and take part in the training, known as Sexual Harassment and Assault Response and Prevention, and was ready with some sobering statistics.

Since the start of fiscal 2013, there have been 52 reported sex crimes in USAREUR, Davenport told soldiers at Rhine Ordnance Barracks and Sembach Kaserne in Kaiserslautern, noting that only about a third of sex crime victims report the incident.

“So there’s 156 of our fellow soldiers out there suffering, being victims of this crime,” he told soldiers. Last year, there were 133 reported sex crimes within the command, he said.

Most of those crimes took place in the barracks on a weekend, and typically involved alcohol. More often than not, the victims were relatively new arrivals to their units, Davenport said.

While most victims were women, according to the Defense Department, in 2011, 12 percent of sexual assault victims who filed unrestricted reports that allowed the military to investigate their allegations were men.

Whether men could not fall victim to sexual assault was one question debated at garrisons around the command. Others included whether the way someone dresses or acts plays a role in their becoming the victim of sexual assault and whether rapists can be identified by the way they look.

“You can agree or disagree,” Davenport told the four dozen or so soldiers and civilians crammed into a conference room at Sembach. All that matters is that everyone knows the standards and what happens if they’re violated.

Recent changes to the Uniform Code of Military Justice’s treatment of rape and carnal knowledge “expand the criminalization of sexual behavior,” said Capt. Meghan McEnerney, the special victim prosecutor for USAREUR and Central Command. Any touch and a comment with sexual innuendo, which used to be classified as sexual harassment is, under the new code, considered sexual assault, she said.

Since 2009, when the Army added special victim prosecutors and investigators to help combat the rising tide of sex crimes, prosecutions and convictions of rape and sexual assault have increased dramatically, McEnerney said.

Those convictions, however, required that the victim file a so-called “unrestricted report,” allowing investigators to look into sex crime allegations and setting the wheels in motion for a possible day in court. Many victims choose to file restricted reports, which keep the crimes a secret while giving the victims access to health services and counseling.

More and more, though, MacEnerney said, victims of sex crimes are filing unrestricted reports because there’s a growing awareness that military commanders are taking the issue seriously.

“It’s not like it was five, 10 years ago,” she said. The “most important thing to note is that there’s no way for these types of cases to be swept under the rug anymore.”