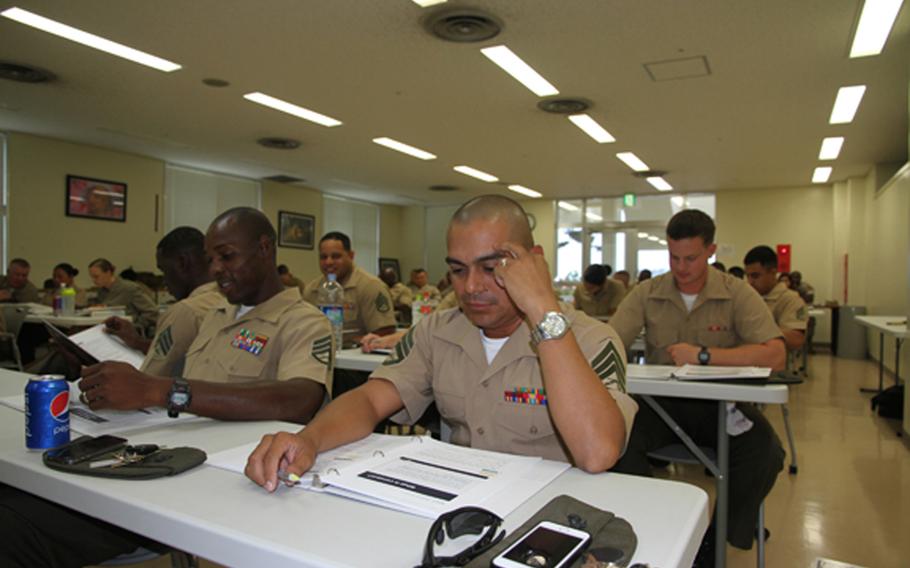 Marine uniform victim advocates at Okinawa's Camp Foster review their materials during a recent Step Up sexual assault training session. The training is designed to teach the advocates how to reach junior Marines, who are the most at-risk group in the Corps. Implemented in July, the training drills junior Marines on how to act in real-life situations and intervene to stop sexual assaults. (Matthew M. Burke/Stars and Stripes)

CAMP FOSTER, Okinawa — The lights dim and the training class settles in for a video that shows young men and women playing drinking games while music thumps in the background.

A woman is pressured into doing a keg stand. A man acts violently toward her when she spurns his advances. Their friends do nothing.

Later, the man corners the woman in an upstairs bedroom and rapes her. He adds to her shame by posting drunken photos on social media sites.

The lights flick back on. The class sits silently.

The chilling video would be well-suited to be shown on just about any college campus in America. Marine Corps officials are banking that it is equally suited for junior Marines to help curb sexual assaults in the ranks.

“Step Up to Stop Sexual Assault” is a new Defense Department initiative being rolled out at Marine Corps installations around the world. The program is designed to give the Corps’ uniformed victim advocates the tools to get through to junior Marines about acceptable behavior and intervention techniques as bystanders.

The program supplements the Sexual Assault Prevention and Response pre-deployment training and is now required for lance corporals and lower-ranking enlisted Marines, according to a Marine Corps statement. It provides a multitude of activities and multimedia tools that focus on situations that a young Marine is likely to encounter — such as the gym locker room or alcohol-fueled parties.

“Before this, they had sort of a one-hour brief that was pretty much geared toward all members of the command, all ranks,” said civilian instructor Sunny Street. “So this one is specifically geared towards their ranks and their age group.”

Step Up was implemented on July 28 with the aim of tackling the Corps’ most glaring statistic: Approximately 90 percent of the sexual assault victims in the Marine Corps are ranked corporal and below, according to the 2013 Marine Corps Sexual Assault and Prevention Response Campaign Plan.

The training was rolled out recently to the Corps’ uniformed victim advocates on Camp Foster as the final part of their 40-hour training course, which also includes guest speakers and role-playing from actual assault cases, Street said. The advocates will then provide it to small groups of no more than 30 junior Marines. Most of the advocates are staff noncommissioned officers.

“They’re that level of leadership that the junior Marines and [noncommissioned officers] look up to,” Street said.

“We want them to model the appropriate attitude for this, because we have young people that come into the Marine Corps as well as other branches of service and they have been pretty much saturated with the entertainment industry the first 18 years before they came, and that entertainment industry objectifies women and infantilizes men. It portrays and projects consent in a way that is completely inconsistent with the law, and so they’re having to re-educate based on what the law says and project a value system that’s consistent with the law.”

“LCpl Hart keeps shrugging him off,” the training materials say. “At one point, Hart gets up abruptly and says she needs to go outside and get some air. Moments later, Barnes follows ... What do you (as a bystander) do or say?”

A gym locker room scenario focuses on a Marine putting his genitals on another Marine as a prank.

“What do you say and do?” the class is asked, as if they were bystanders. “Could you have done something sooner?”

While it is too early to assess the program’s effectiveness, advocates said they expect it to be a success.

“It’s targeting the behavior of the junior Marines, so I think it was well-scripted, well-directed, and the presentation was awesome because the young Marines can relate to those videos and scenarios that were in there,” said advocate Master Sgt. Jeffery Hightower.

Street said expectations for Step Up are similar to those for the “Take a Stand” training for noncommissioned officers. Once that training was implemented, reporting of sexual assaults increased, which military officials say is an indication that people who might have kept quiet are now willing to come forward.

In the civilian sector, there is a direct correlation between increased reporting and the lowering of assaults because offenders know they will be caught.

“I think bystander intervention is a concept in and of itself that I wished all of us appreciated and took to heart — and not just with this topic but with everything,” Street said. “This is a community issue and it’s about members taking care of each other.”