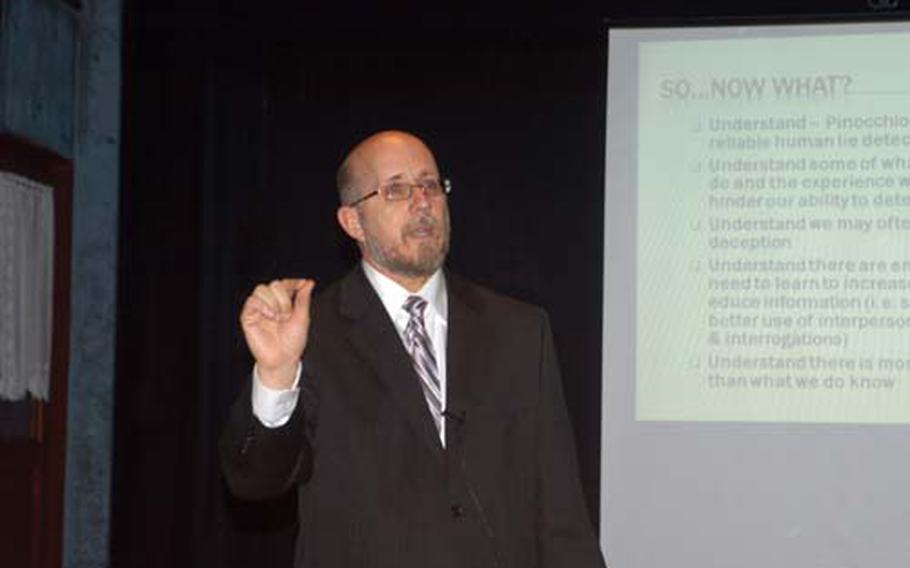 Russell Strand, chief of the Family Advocacy Law Enforcement Training Division of the U.S. Army Military Police School at Fort Leonard Wood, Missouri, discusses research showing that everything taught in MP school about detecting deception is wrong. Do you want to know if someone is lying, he said? Flip a coin. (Nancy Montgomery / S&S)

Russell Strand, chief of the Family Advocacy Law Enforcement Training Division of the U.S. Army Military Police School at Fort Leonard Wood, Missouri, discusses research showing that everything taught in MP school about detecting deception is wrong. Do you want to know if someone is lying, he said? Flip a coin. (Nancy Montgomery / S&S) Posters are shown in the lobby of a Heidelberg garrison theater where social workers, military police and victim advocates participated in a program Friday on rape. (Nancy Montgomery / S&S)

HEIDELBERG, Germany &#8212; How many drinks did you have? What time did you get to his room? Did you try to fight?

These are the wrong questions to ask rape victims, according to an Army educator and national expert on sexual assault, and will elicit the least information while doing the most damage to an already traumatized and vulnerable victim.

"We&#8217;re trying to kick in a locked back door when we should be invited through the front door," Russell Strand told a group of military police, social workers and victim advocates here on Friday.

Instead, investigators should recognize what trauma does to victims, ask open-ended questions and empathize with the victim&#8217;s experience &#8212; not just get the facts &#8212; for the best results.

"What did you do next? What were you feeling at the time? What do you remember? Help me understand" are some of the things they can ask, said Strand, chief of Family Advocacy Law Enforcement Training at the Military Police School at Fort Leonard Wood, at a seminar for "first responders" to sexual assault.

"Disclosure is a process, not an event," he said. "You deal with it a piece at a time. If we understand that, we won&#8217;t hurt these victims more."

Strand, who spent more than 20 years as an Army criminal investigator, used provocative videos, neurological science, personal stories and humor to give his audience a better understanding of how victims typically behave, why they behave that way, and what they need from law enforcement.

He told some 40 people who attended the training that there needed to be a "revolution" in the response to sexual assault, based on an understanding of the physiological effects of trauma and better insight into human behavior rather than on myths about it.

Strand said that societal misunderstanding of sexual assault dynamics continue to do a disservice to victims, and that victims who acquiesce or otherwise behave in "counter-intuitive" ways are actually doing what victims do. "People don&#8217;t do what they think they&#8217;d do," he said. "Because they&#8217;re going into shock."

Investigators need to understand, as well, he said, that trauma, with its flood of neurochemicals and the brain&#8217;s near shut-down except for automatic survival functions, typically works on memory to make some events during the assault especially vivid, and others hazy.

These are not signs the victim is lying, he said; these are clues &#8212; part of a victim syndrome, along with guilt and minimization &#8212; that the victim is telling the truth.

These techniques, he said, have been used for years in interviewing children who&#8217;ve been abused. And trauma victims, he said, are "in the state of a child in many ways."

He told a story about a case years ago in which the woman stopped cooperating because of his insensitive questioning, then recanted. "Another liar," he said he thought then, who had wasted his time. It wasn&#8217;t long, he said, before that woman&#8217;s attacker raped another woman.

The training was the third on the subject in Heidelberg in the past several weeks as the Army attempts to reduce sexual assault in its ranks following years of what critics say was ignoring it or responding ineffectively.

MP investigator Joshua Moore, who attended the training, said he&#8217;d learned much of what Strand was saying in MP school.

Moore said the same techniques, using compassion and empathy in interviews, are also useful when dealing with suspects. "People will confess to people they like, trust and respect," Moore said.