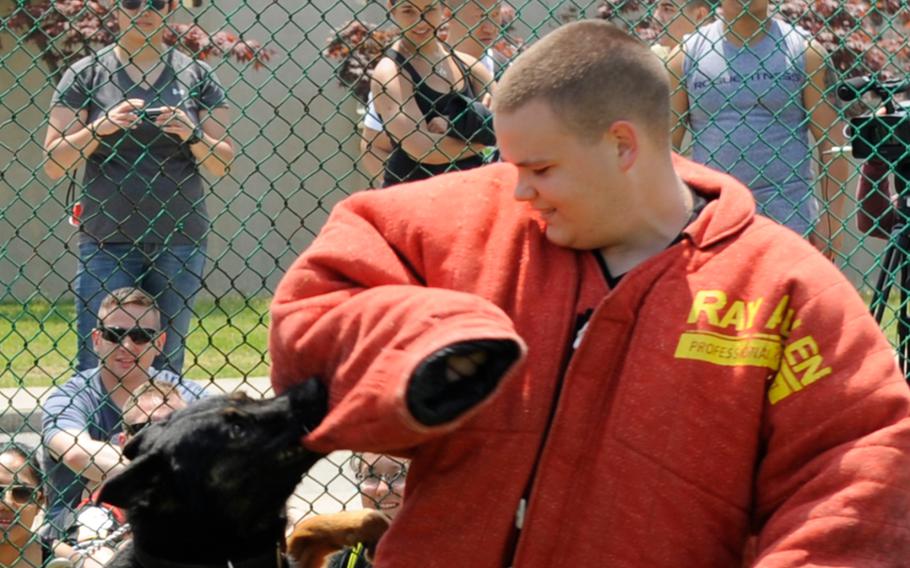 Robert Kelgard takes part in a military working dog demonstration during a sports day event for the children of a South Korean orphanage at Kunsan Air Base in 2013. The former U.S. senior airman has been jailed for sexually abusing orphans and possessing child pornography in a 2016 case that prompted new community guidelines at the base. (Marcus Morris/U.S. Air Force)

SEOUL, South Korea – A former U.S. senior airman has been jailed for sexually abusing two South Korean orphans and for possessing child pornography in a 2016 case that prompted new community guidelines at Kunsan Air Base.

Robert Kelgard, who was stationed at Kunsan from June 10, 2012, to June 27, 2013, pleaded guilty to molesting two boys along with the pornography charge, according to court documents.

During an April 2016 court-martial, he was sentenced to 15 years in jail, a dishonorable discharge, forfeiture of all pay and allowances and reduction in rank. The U.S. Air Force Court of Criminal Appeals upheld the sentence on Jan 10.

Col. John Bosone, commander of the 8th Fighter Wing, called it “a very shameful past moment for Kunsan Air Base and our community.”

“The heinous crimes committed by this predator are despicable, unbecoming of a service member, and are not reflective of the men and women who have proudly served for decades at Kunsan Air Base,” he said Monday in a statement.

“Maintaining trust is a priority, and we will continue to reinforce the highest standards of conduct for our Airmen. Those who fall short are held accountable,” he said.

The young victims declined to participate in the military criminal proceedings, but a social worker issued a statement on their behalf demanding justice for the pain they had suffered, according to the Yonhap News Agency, which first reported the details of the case.

The statement was instrumental in the sentencing of the assailant, Bosone said.

The case, which grew out of an unrelated investigation while Kelgard was stationed at Kadena Air Base in Japan, led to new measures for dealing with the community outside Kunsan, which is about 150 miles south of Seoul.

The 8th Fighter Wing quickly intensified background checks for all personnel who wish to volunteer or work with minors, elderly people or other vulnerable populations.

Those include a requirement that all members of the unit who wish to volunteer or work with minors, elderly people or other vulnerable populations must undergo a more intensive background check than required by Air Force regulations.

Base programs including children under 18 also have chaperones to monitor interactions and relationships between airmen and children.

“Children, U.S. or Korean, who participate in these programs are taught to notify a teacher, parent, or law enforcement officials if they encounter something unusual or have an inappropriate interaction,” according to the guidelines provide by the public affairs office.

The 8th Fighter Wing said no courts-martial involving allegations of child pornography or child sexual assault have occurred on Kunsan since the Kelgard case.

The allegations came to light during a 2014 probe of Kelgard for an unrelated incident that happened during his stint at Kadena. Investigators found at least 41 child pornography internet videos on his computer hard drive, prompting them to expand their search to prior assignments.

“As soon as United States Air Force investigators stationed at Kunsan Air Base were made aware of the incidents, they, with Korean National Police, immediately and aggressively investigated the allegations, and Kelgard was militarily prosecuted for his crimes,” according to the 8th Fighter Wing.