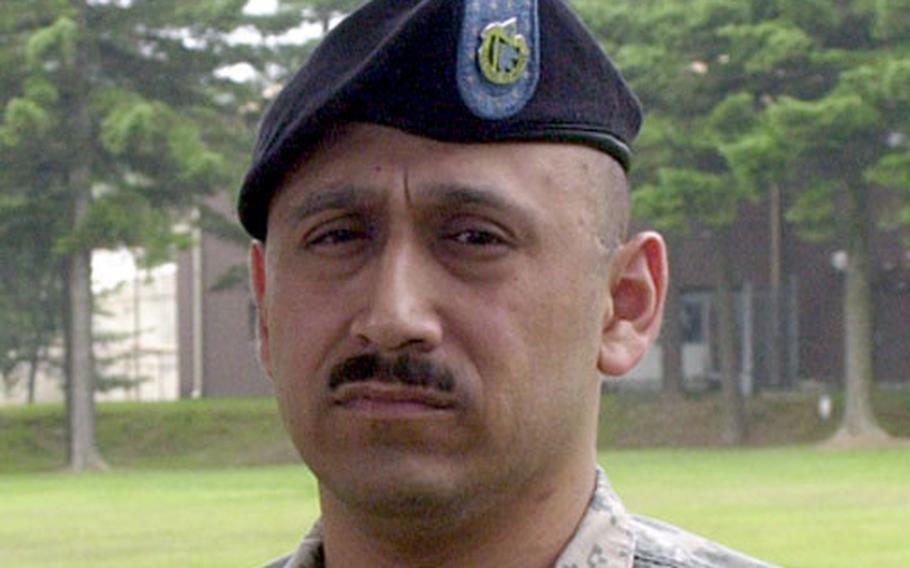 Staff Sgt. Jaime Martinez is one of seven 2nd Infantry Division soldiers to receive the Combat Action Badge this year for service in Iraq or Afghanistan. (Erik Slavin / S&S)

Any servicemember attacked after Sept. 18, 2001, by roadside bombs, small arms fire, rockets, suicide bombers or other methods is eligible for the badge.

The badge was created in May 2005 after heated debate over whether non-infantry soldiers who saw action deserved the Combat Infantryman Badge, at the time the only nonmedical combat badge available to combat veterans.

Staff Sgt. Jaime Martinez, of the 2nd ID&#8217;s headquarters company, received his badge recently for his service in Iraq during the initial push to Baghdad. A chemical operations noncommissioned officer by trade, Martinez found himself under fire while serving with the 3rd Infantry Division&#8217;s Task Force 2-7 on April 3, 2003, at Baghdad International Airport.

One of those T-72 Iraqi tank rounds exploded about 50 feet away, sending shrapnel into Martinez&#8217;s left temple. Another soldier grabbed him and took him to an aid station about 650 feet away.

Martinez also spent March 2004 to March 2005 in Iraq with the 1st Cavalry Division, where he experienced nine roadside bomb blasts. He says the Combat Action Badge is an important symbol of the way soldiers in other specialties led or participated in infantry roles.

The CAB also is open to female servicemembers, who effectively are barred from the Combat Infantryman&#8217;s Badge because of the restriction on women serving in infantry units.

But the nature of the wars in Iraq and Afghanistan mean that women actively serve in combat roles under different designations.

Chief Warrant Officer Cathy Jarrell, a new CAB recipient, came under anti-aircraft and surface-to-air-missile attack while flying her Longbow Apache helicopter during one of the first direct-fire engagements of the Iraq war on March 20, 2003.

She credits her fellow fliers from the 3rd Infantry Division&#8217;s 1st Battalion, 3rd Aviation Regiment for knocking out an enemy observation post while flying just 50 feet off the ground, and coming out unscathed.

The badge itself not only reflects her experience, but it also reminds her of others downrange.

&#8220;Its kind of humbling when you think of all the people hurt over there fighting,&#8221; said Jarrell, currently serving with the 6th Battalion, 52nd Aviation Regiment.