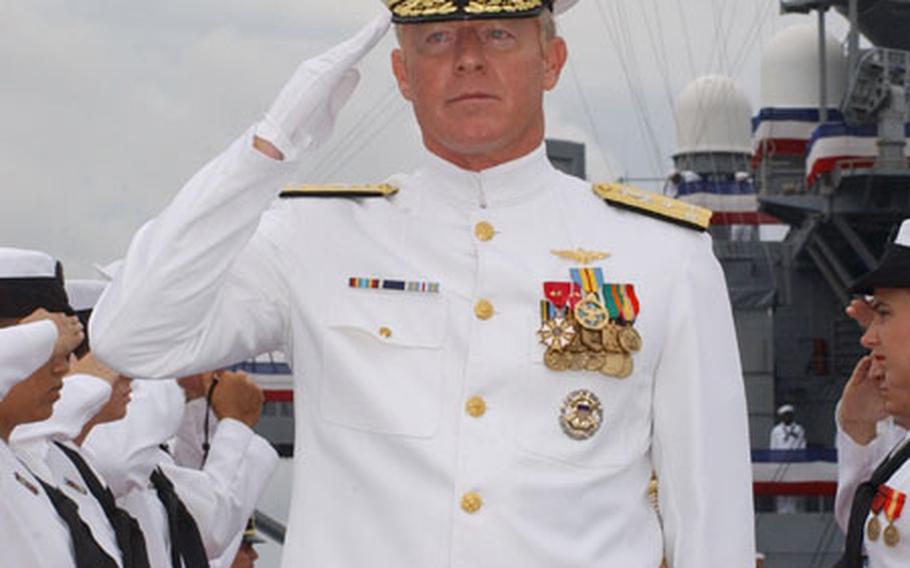 YOKOSUKA NAVAL BASE &#8212; Vice Adm. Robert Willard, commander of the Navy&#8217;s Seventh Fleet for the past two years, is heading to the Pentagon for his next assignment, advising on how the Navy should be structured, tested and resourced.

Secretary of Defense Donald Rumsfeld announced in a news release Friday that Willard&#8217;s new title would be director of Force Structure, Resources and Assessment.

Willard, a 1973 U.S. Naval Academy graduate originally from Los Angeles, will report to the chairman of the Joint Chiefs of Staff.

Willard served in the late 1990s at the Pentagon, on the staff of the joint chiefs as deputy director for what was then called Operations and which, he said, dealt with large strategic issues.

His latest appointment must be confirmed by the U.S. Senate. Willard said he&#8217;s hopeful he&#8217;ll be confirmed between Congress&#8217;s Fourth of July break and its summer recess.

If so, he&#8217;ll be relieved shortly afterward by Rear Adm. Jonathan Greenert, who was deputy and chief of staff for the Pacific Fleet until he was confirmed recently to lead the Seventh Fleet. Greenert is to be promoted to vice admiral shortly before the as yet unscheduled change-of-command ceremony.

It is, coincidentally, the second time Greenert has relieved Willard. Willard also served as Pacific Fleet deputy and chief of staff before taking command of the Navy&#8217;s largest forward-deployed fleet in July 2002.

In particular, Willard said, he relished working with the navies of other nations in the region and especially the Japanese Self-Defense Forces.

Willard has enjoyed a stellar Naval career, doing everything from flying F-14s (and flying in the movie &#8220;Top Gun&#8221;) to commanding fighter squardrons and a variety of ships, including the USS Abraham Lincoln.

Working again at the Pentagon, Willard said, will provide him the opportunity to be connected with ongoing military transformation efforts.