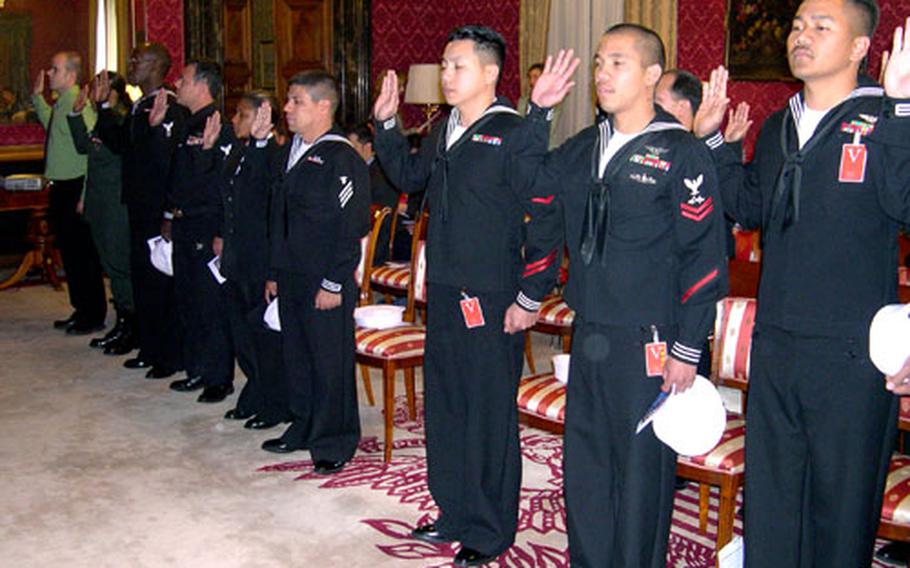 Seventeen military members raise their right hands and read the oath of allegiance to the United States during a naturalization ceremony Thursday. The ceremony, held at the U.S. Embassy in Rome, was the first large ceremony held in Italy for military members. (Jason Chudy / S&S)

Seventeen military members raise their right hands and read the oath of allegiance to the United States during a naturalization ceremony Thursday. The ceremony, held at the U.S. Embassy in Rome, was the first large ceremony held in Italy for military members. (Jason Chudy / S&S) 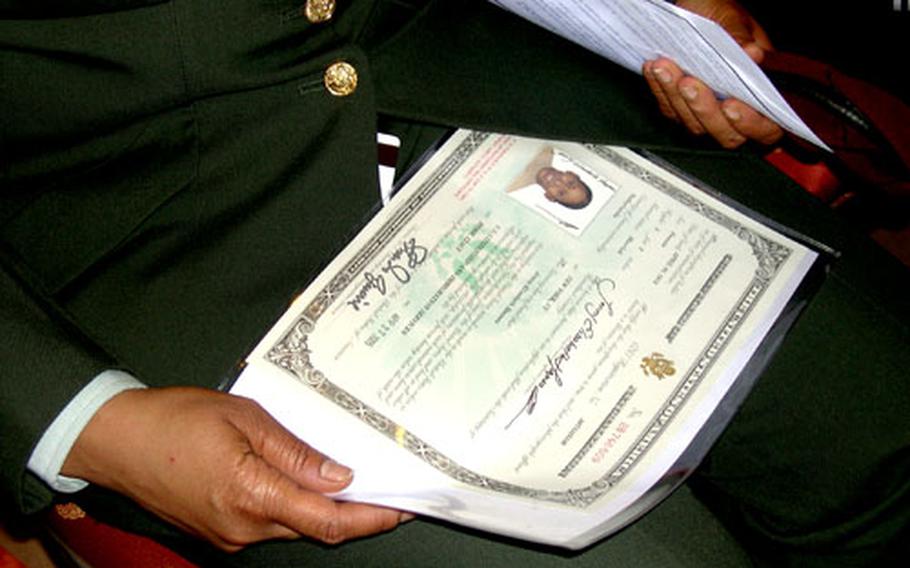 Spc. Jenny Elisabeth Haynes of the Southern European Task Force in Vicenza, Italy, holds her naturalization certificate after a naturalization ceremony. Haynes had been a citizen of the Netherlands. (Jason Chudy / S&S)

That afternoon, the 16 sailors and one soldier returned as U.S. citizens to their units and commands in Sicily, Sardinia, Naples, Vicenza and Rota, Spain.

The group was sworn in during a ceremony Thursday afternoon at the U.S. Embassy in Rome as family, friends and Marine embassy guards watched. This was the first large citizenship ceremony for military members in Italy since an October 2004 law allowed naturalization ceremonies at overseas embassies, consulates or military bases.

Macalma, of the Philippines, was the longest-serving military member earning his citizenship Thursday.

Seaman Benito Bautista of the La Maddalena, Italy-based USS Emory S. Land was one of the newest. With two years of service, the 37-year-old smiled as he recalled a childhood dream that he had long forgotten.

He became a U.S. resident and worked as a limousine driver in New York City. After Sept. 11, 2001, business slowed and Bautista decided that it was time to serve his adopted country.

It was only after he made that decision that his mother told him about his childhood dream.

Now, his adopted country has become his home, as it has for many military members since an amended Immigration and Nationality Act allowed military members a streamlined process to gain citizenship during a presidential-declared time of conflict.

Before the act was amended, military members could only naturalize while in the United States.

Officials have already done similar naturalization ceremonies in Afghanistan and Iraq and more are planned, said Anne Arries Corsano, deputy district director of the Rome district office for the Department of Homeland Security.

In addition to Thursday&#8217;s large event, the department has naturalized 15 individual military members stationed in Italy &#8212; all of whom wanted to do so before deploying.

As cake was passed and spumante was poured for the new citizens, they shook hands with the few dozen well-wishers.