Seven who helped save Korean kids from drowning are honored 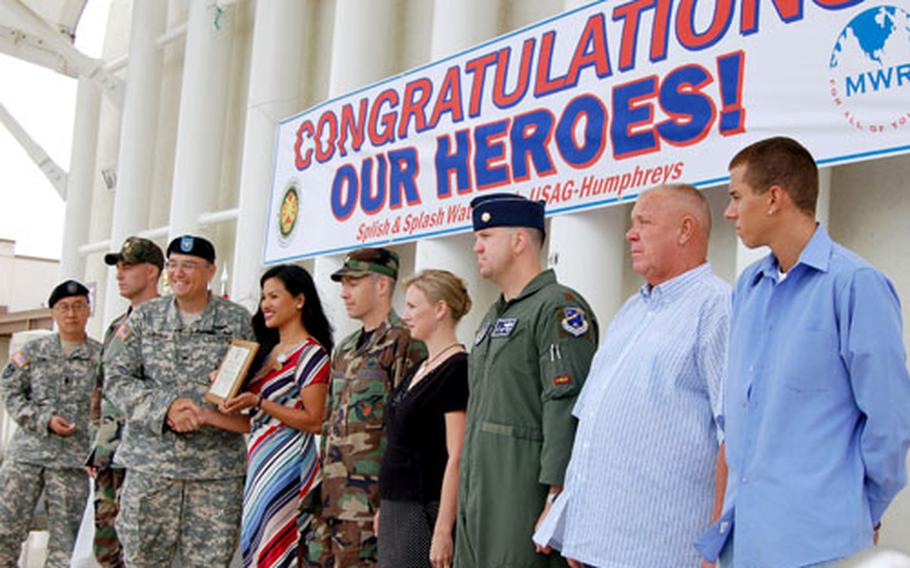 CAMP HUMPHREYS, South Korea &#8212; Seven people who recently worked together to save two South Korean children from drowning were awarded Friday for their actions.

&#8220;Because of their combined actions, two children are alive and well and safe with their families,&#8221; said U.S. Army Garrison Humphreys commander Col. John E. Dumoulin Jr. &#8220;Those seven people are heroes.&#8221;

While officials from Humphreys and Osan showered the seven with praise, participants in the rescue said they didn&#8217;t think of themselves as heroes.

A lifeguard spotted one child at the bottom of the pool and dived in to assist. Upon realizing that there were two victims, the lifeguard called for help. Two Air Force officers visiting the park with their families rushed to his aid, while a third called emergency services. Two family members and a second life guard then administered CPR.

The incident led to increased safety measures at the park, including requiring parents to sign safety statements when bringing their children and giving lifeguards the authority to administer swimming tests to those they think might be weak swimmers.