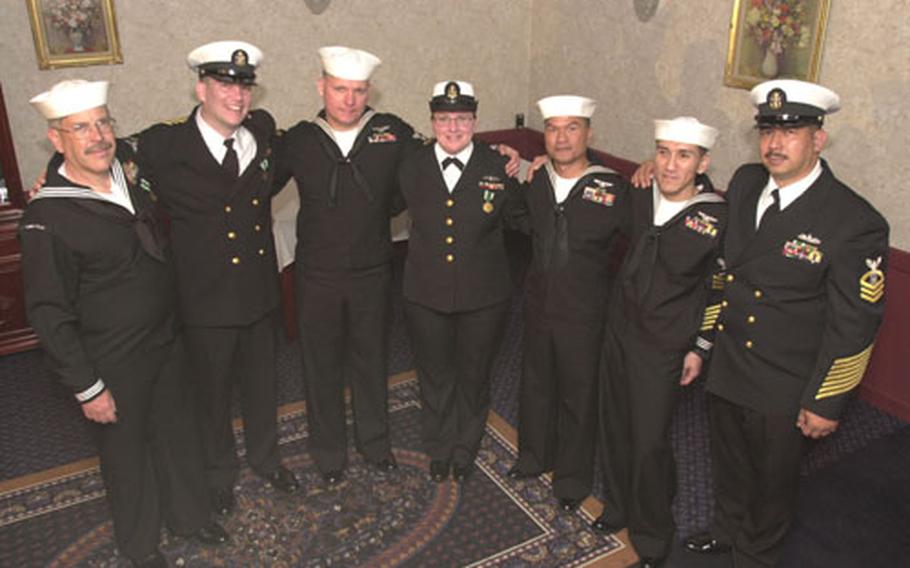 ATSUGI NAVAL AIR FACILITY, Japan &#8212; For Chief Petty Officer William Dyer, there was no choice, really. His next assignment would take him to a ship, and as the single parent of two daughters, there was no way he could spend extended periods at sea.

In less than four months, he will hang up his Navy uniform and look for a computer job in his hometown of Durham, N.C.

Dyer was among three Navy chief petty officers and four petty officers first class with a combined 150 years of service who retired during a 90-minute ceremony at NAF Atsugi on Friday. The seven leave knowing they could be called back to serve their country at any time: Each was accepted into the Naval Reserve.

Sure, it&#8217;s possible he could be recalled, he said, but Frazee, like the others, is more focused on making a new life outside the Navy.

Chief Petty Officer Glenda Hicks will be the first of the seven to depart Atsugi. An information systems technician, her last day on the job is Saturday.

&#8220;I&#8217;m so excited that I&#8217;m going home to see my husband and my baby,&#8221; Hicks exclaimed in a brief speech during the ceremony. Her husband, a Navy senior chief petty officer, and daughter, Lynsey, await in Corpus Christi, Texas.

The family of Petty Officer 1st Class Patrick McCullagh also is waiting &#8212; in the Philippines, where McCullagh said he bought a beach and is building a house.